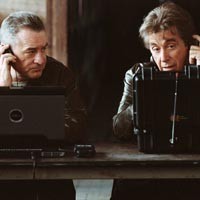 I wish I could promise that the new Robert De Niro and Al Pacino hype machine “Righteous Kill” will strike you as a dignified, thoughtful reunion of two favorite film icons. But then, I must at some point tell you their characters' names are Turk and Rooster. There's nothing wrong with these two taking on tough-guy roles again, but there's something overly strenuous about the effort in this case. Thinking of movies like “Analyze That” and “Oceans Thirteen,” De Niro and Pacino have refused to age gracefully in the past. Refusing to acknowledge you've aged at all is something different. “Righteous Kill,” at any rate, simply refuses to acknowledge what should have stopped its leads in the first place. This brand of suspense mystery was already passAc back when they made their well-received crime movie “Heat” together 13 years ago.

This time Pacino and De Niro play two cagey homicide detectives fed up with psychopathic killers getting off on technicalities. Aren't we all? So they plant evidence on one such lawbreaker, only to discover someone else has begun taking a more extreme approach to vigilantism, offing bad guys who happen to know the detectives. Suspicion, you may not be surprised to learn, eventually falls on one of them. Most of the audience will think they know exactly who the killer is after the first act. A few holdouts will sit there convinced that Hollywood couldn't possibly have made the same kind of movie yet again, but they will nevertheless be disappointed.

Not satisfied himself with such a simple whodunit, director Jon Avnet has had his footage briskly chopped in the editing room and fashioned as if, at the last minute, he decided he wanted the movie to play like “Memento.” This will make for decidedly longer conversations afterward as you debate the meaning of at least half the scenes. Perversely, the stuff you can easily understand plods like a stricken brontosaurus, or at least like the acting of co-star 50 Cent.

Luckily acting is a skill that transpires independent of reason. De Niro and Pacino are like two old Steinways that don't know or care they're being used to play Chopsticks. They make good with obligatory moments of wisecracking comic relief. They don't overdo the more serious stuff, either, and there are even a few instances when De Niro is narrating that inspire chills of flashback to Travis Bickle and “Taxi Driver.” Whether that's enough to deserve whatever lavish payday these two rascals connived out of their employers' bank accounts, I'm not qualified to answer. All I can tell you is that the ads show them chewing up a lot of scenery, and the movie sure follows through with that. (R) 101 min.