Ray of Light: Keeping a Brewery Spinning Behind the Scenes 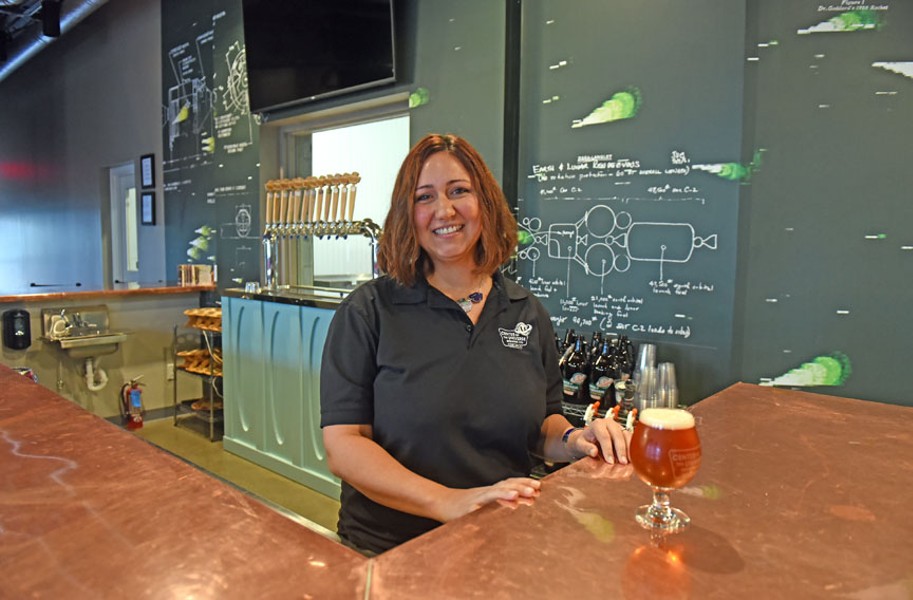 Scott Elmquist Ashley Ray of Center of the Universe Brewing Co. stays behind the scenes, helping to drive the company forward.

Ashley Ray may be less visible to the public, but she’s become a significant force for Center of the Universe Brewing Co. She keeps it front and center using her experience as a social media manager and content creator

Her husband, Phil Ray, and his brother, Chris Ray, co-own the brewery. The official tale goes like this: Major league baseball player Chris and his engineer brother, Phil, started dabbling in home brewing. “The hobby turned into an obsession,” the brewery’s website says, and the two decided to start their business.

But there’s more to the story. Phil and Ashley, who recently celebrated their ninth wedding anniversary, began the beer pilgrimage together. They started to explore European beers at Mr. Dunderbak’s Biergarten near their home in Florida. When Chris suggested home brewing, they were in.

“Phil immediately, being the engineer, began studying everything there was to study about the process,” Ashley recalls, “and I just started thinking about the ingredients.”

Meanwhile, Chris and Phil swapped home brews and tweaked recipes. Beer they created in those days later found their way into the lineup of COTU, as the brewery is known: Ray Ray’s Pale Ale, Pocahoptas IPA and Homefront IPA, the nationally brewed collaboration beer that supports military charities.

In Florida, Ashley was working for a social media company. On the side, she traded promotion for supplies at a local homebrew shop, learning firsthand about communications in the beer industry. Phil and Chris began entertaining the notion of opening a brewery.

This is where Chris Ray’s wife, Alice, comes in, the spouse who made the brewery a producer of Virginia beer. Although Ashley and her husband’s family hail from Florida, Alice is from Hanover County.

Between her family connection to the area and what was at the time a new law that allowed Virginia breweries to serve beer on site, Ashland was attractive to both couples. It became the home of their new business venture.

Ashley managed its social media from the start while pouring beer in the tasting room and working the canning and bottling lines.

“Ray Ray” is the name that appears in the inbox for news releases, but the woman behind the email downplays her contributions. The brothers manage the business and move its vision forward, she says.

“Phil and Chris are both so creative,” Ashley says. “They have so many ideas running around in their heads — almost constantly — that much of what goes on here is thought up by the two of them. That being said, I definitely add to and contribute to those ideas and then help promote them.”

She’s also involved in taste-testing new beers and helps come up with names. But many of the new seasonal beers are thought up by the “brew crew,” she says — the brewers: “My role is to take all of the things that are happening behind the scenes and at the brewery and share those stories with the public.”
Many of those stories involve charity events. “We’ve always been the kind of people that like to give back,” Ashley says.

In February she resurrected her orange blossom honey ale recipe from her home-brewing days and created Bee Generous for a charity event at Origin Beer Lab, the business’ nanobrewery in downtown Ashland.

Proceeds went to the Women’s Housing and Economic Development Corp., a New York-based charity that she’ll support when she runs in the New York half-marathon. She also bartended for the event and sold homemade pickles to raise money — including pickled cauliflower with cumin and Thai pickled carrots.

Other than Bee Generous, Ashley hasn’t had the opportunity to brew recently — but that may change. “That’s the beauty of Origin,” she says. “We get to play with recipes.”

As for tips for other breweries she’s gleaned through the years, Ashley advises sharing more of yourself. “People need to get to know your personality,” she says. “Show your people as much as your beers.”

In the tasting room, she says, the brewery advises its employees to make beer approachable, to eschew snobbery in favor of an inclusive atmosphere. For marketing, she emphasizes the importance of developing positive relations with local media.

And Ashley reminds breweries to pay attention to the language they use in marketing their products. Brewers need to avoid objectifying women with offensive labeling. And slapping a pink label on a beer bottle isn’t the way to appeal to the female market, she says: “Let’s stop calling beers that are light, ‘lady beers.’ I like hops and stouts.”

Ashley doesn’t have to remind the owners. From their social media manager to the image on the Pocahoptas IPA, both Phil and Chris seem to appreciate strong women. S