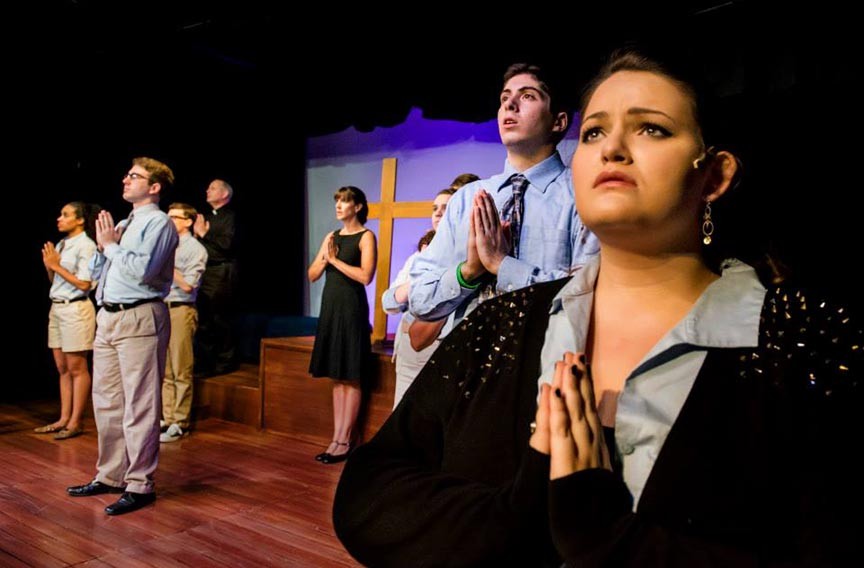 A musical that focuses on high-school kids and their sexuality in the repressed environment of a Catholic boarding school can’t avoid being full of emotional Sturm und Drang. But in case that isn’t enough, “Bare: a Pop Opera,” from Richmond Triangle Players, has its characters acting in a school production of “Romeo and Juliet,” the template for teen romantic tragedy. So if you think this show has all the ingredients of an angst overdose, well, you’re right.

But the skillful and ultimately stirring thing about this production under Justin Amellio’s accomplished direction is how relatable each character becomes. Even when emotions reach the overwrought stage, the characters seem real and human so that only the most stonehearted patron will leave this show unmoved.

A fresh-faced cast of engaging young actors provides another key to this production’s success, with a bravura performance by Ian Page leading the way. Page plays Peter, gay and a misfit, who finds solace in a clandestine love affair with his roommate, Jason (Sam Jones). A classic big man on campus, Jason passes easily for straight and has girls swooning over him, setting up a love-hate dynamic between Jason and his overweight sister, Nadia (Kelsey Cordrey). When Peter and Jason have a falling out over coming out, Ivy (Morgan Meadows) swoops in and entangles Jason, setting the stage for many melodramatic turns in the final act.

Page expertly portrays the maturation of a confused, frustrated kid into an honest, self-confident young man without undue flourish. He shares a wonderful scene with another cast standout, Chloe Williams as the sassy Sister Chantelle, who imparts some vital advice in the song, “God Don’t Make No Trash.” The script doesn’t dwell on religious responses to homosexuality but nicely contrasts Sister Chantelle’s compassion for Peter with the chilly reception Jason receives from a priest (Craig Smith). While the story’s love triangle gets much of the attention, it’s impossible to overlook Cordrey, whose solo turn, “A Quiet Night at Home,” reveals her clear, strong singing voice and her character’s ongoing pain over her fat-girl designation.

Meadows makes the most of her solo moment, “All Grown Up,” a poetic lament that only a more popular girl could sing. The supporting cast includes numerous actors (Lucian Restivo, Tarnee Kendell Hudson, Annie Hulcher) who’ve had star turns of their own in the past, including Hannah Zold, who captures the heartbreaking inner conflicts facing the parent of a gay child in the song “Warning.” Musical director Kim Fox and her four-piece band provide robust but perfectly integrated sonic support for this sung-through show. As overwrought as “Bare” gets, Fox shows welcome restraint: Her music never overwhelming the singers.

The other technical elements are serviceable, with T. Ross Aitken’s simple set design dominated by a large wooden crucifix, and a lighting design by Rebecca K. Brooks that sometimes leaves characters in shadow. What never dims is the raw emotional output by a talented young cast, making this crusty old reviewer nostalgic for high school but also thankful it was so many years ago.

“Bare: a Pop Opera” plays at Richmond Triangle Players Theater through Aug. 17. Call 346-8113 or visit rtriangle.org for tickets and information.

CORRECTION: in the photo caption, Ian Page plays a character named Peter who is in a relationship with a character named Jason. It is Jason that is in the brother/sister love/hate dynamic with Kelsey Cordrey’s character, not Peter.