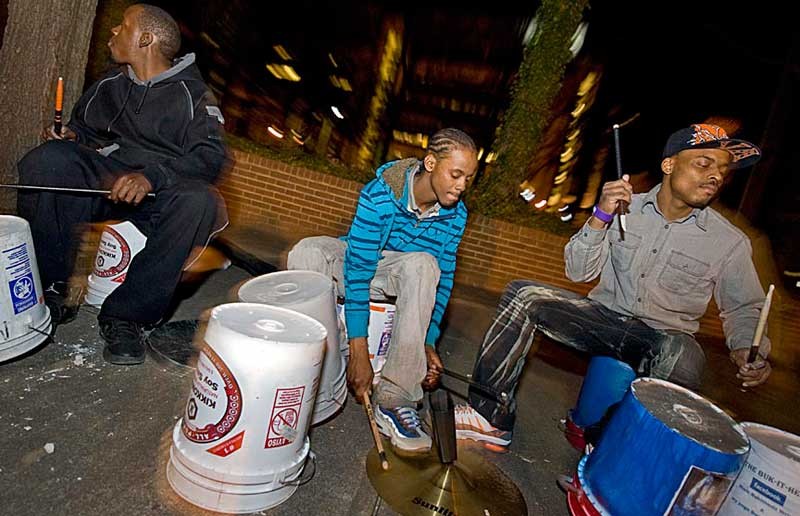 Through the window, the lights from the marquee outside the National concert hall shine. Drizzle falls to the steady sounds of drumstick meeting plastic bucket. "It's 12:30 a.m., and they're still playing," Jonathan Dice says.

The scene comes from a 32-second video that Dice shot from inside his condo a few days before Christmas. A resident of the renovated Miller & Rhoads condominiums on Broad Street, Dice says that despite laws regulating excessive noise, he and other residents often are awakened after midnight by the incessant pounding of street percussionists playing for money outside nearby performance venues.

Dice says he doesn't mind people making music on public streets. He's a recent transplant from busker-friendly Nashville, Tenn. "At a certain point, though, it becomes excessive," Dice says. He and other residents of Miller & Rhoads say their continuing complaints to Richmond police haven't deterred the bucket drummers.

John Cario, general manager of the Hilton Garden Inn, which takes up the first few floors of the former Miller & Rhoads department store (the condos are on the upper floors) seconds Dice's frustration. He and other hotel managers have expressed their concerns to police, he says: "But we seem to be getting the runaround."

Critics of the city's noise ordinance long have questioned whether it can be enforced. The practical difficulties are manifold. Adopted unanimously by City Council in July, the ordinance prohibits anyone from making sound exceeding 55 decibels from 11 p.m. to 7 a.m.

But for the complainant, resolving an excessive noise situation requires making a report, and then waiting for a police unit equipped with a decibel meter and an officer certified to use it. Those meters may not always be readily available. "It's my understanding that we've had residents make complaints about the drumming only to be told that there's no one who can take the call," Cario says.

Richmond police seem to acknowledge the department's difficulties. In a December email sent to Miller & Rhoads property managers, the then commander of the 4th Precinct, Michael Snawder, writes: "Keep in mind that there are a limited number of certified officers within the precinct."

Police have said that the department received enough funding to buy 15 decibel meters. But the department couldn't provide details by press time on the number of meters that have been purchased or how many officers were certified to use them.

What of the accused noisemakers? Mark Wright says that he and his fellow bucket drummers are simply trying to earn some "honest money." On a recent Friday night, the drummers — Wright, his younger brother Lynard, and others collectively known as the Buk-It-Hedz — jam for passersby outside the Richmond Coliseum.

They'll busk late into the night, Wright says — in front of CenterStage when Friday night's event ends and the crowd files out. Following that, they'll do the same at the National. It's how Wright, a 21-year-old drafting design student at J. Sargeant Reynolds Community College, earns extra cash.

"People sometimes tell us to stop, and we do," Wright says. "But most people like what we're doing. The cops respect what we're trying to do. And, y'know, we just hate to miss that money. We have to live too."

But if the police don't do something soon, Miller & Rhoads could lose at least one already frustrated resident. "I'll leave the building if this continues," Dice says. "Part of me wants to let things move through channels to remedy the situation, but the rest of me just says move on." S