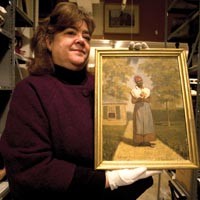 The image is plain, and plainly rendered: A 19th-century African-American woman in crisp, unadorned clothing stands in the center of a sunny outdoor path. She carries a small bouquet of flowers. A nondescript, low-lying building stands behind the woman to her right; leafy trees frame the background. A worn gilt frame surrounds the picture.

The painting, titled “Aunt Betsy,” is an 1857 oil portrait that measures 13 A_-inches tall and 10 A_-inches wide. The Valentine Richmond History Center acquired it two weeks ago from an anonymous collector through a private dealer.

It's also so much more than that.

“It has to be one of the most important acquisitions for this museum in the last decade,” says Bill Martin, the director of the Valentine. “It's deceptively simple.”

That's because the subject was a slave owned by Williams Carter Wickham, grandson of John Wickham, the original owner of the 1812 Federal mansion on East Clay Street that's the central historic feature of the Valentine's property. Aunt Betsy was a nurse to Williams Carter Wickham's children; she experienced a short period of freedom before her death in 1865.

The painting remained with the Wickhams at its original home on the family's Hickory Hill estate in Hanover County until 2006, when it was sold to a private collector. The Valentine bought the portrait in February using a combination of private donations and museum funds.

But the painting's connection to the Valentine — and its rarity as an intimate pre-Civil War portrait of a slave — makes it a priceless addition to the museum's collection, Martin says: “It joins a group of objects that help us tell the story.”

Then there's the lucky back side of the painting. It lays out the portrait's origins with explicit detail: “To Henry & Anne Wickham / From their friend F.B. Mayer / July 1857 [or 1859].” Henry and Anne Wickham were two of the children for whom Aunt Betsy cared; Francis Blackwell Mayer was the artist from Maryland who painted it.

“It's a little sentimental,” Martin says of the portrait. The painting's style is a harbinger of the stereotypes that came to dominate public discourse about slavery for years to come, he says. “It's a confounding image for us because it presents this nostalgic, romantic view from a white painter to [Aunt Betsy's] owners,” Martin says. “This kind of image becomes very strong after the Civil War as an attempt to rationalize the slave experience.”

The Valentine Richmond History Center began displaying “Aunt Betsy” with other items from the Hickory Hill estate on March 6.