Rapper Pusha T Got Married At The Cavalier Hotel

Guests include Kim and Kanye and Pharrell Williams. 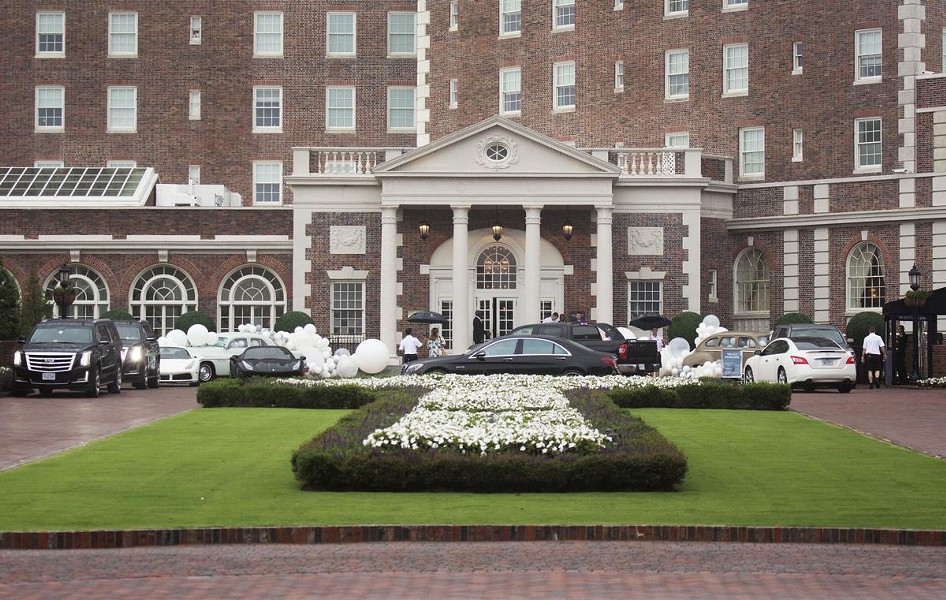 L. Todd Spencer Balloons in front of the Cavalier Hotel on Saturday, July 21 at the wedding of Pusha T to Virginia Williams.

Outside The Cavalier Hotel, things seemed very quiet on a rainy Saturday afternoon.

But the scene inside told a different story.

Rap star Pusha T, who grew up in Virginia Beach, and his longtime girlfriend, Virginia Williams, chose the recently restored Oceanfront landmark as the spot for their wedding.

Among those on hand to witness the union: Kanye West and his wife, Kim Kardashian West, and Pusha T’s best man and fellow Virginia Beach musical luminary, Pharrell Williams.

During the day, white and black Ferraris were parked outside the hotel – out of view of passersby on Atlantic Avenue – and white balloons surrounded the front entrance.

Signs saying “private event” blocked off the Raleigh Room and the Crystal Ballroom, where more white balloons in the shape of a chain necklace surrounded the doors.

Ahead of the big weekend, social media gave a hint of what was to come.

One Instagram post showed a long, elegantly set table ready for Friday night’s rehearsal dinner. And artists on the guest list such as Trey Songz and Pharrell, a Princess Anne High School grad, popped up on Instagram.

One video showed Pusha T, whose real name is Terrence LeVarr Thornton, giving a toast to his upcoming nuptials in the Raleigh Room.

On Friday, the groom’s friends, Steven Victor and Fabian Marasciullo, posted videos to their public Instagram accounts showing them driving their Ferraris on the interstate.

The hotel remained open to the public all weekend. Hours before the event, the atmosphere at the hotel was relaxed, as if nothing special were going on. Police cars passed by the front entrance a few times, but security remained minimal.

On Friday, the groom’s friends, Steven Victor and Fabian Marasciullo, posted videos to their public Instagram accounts showing them driving their Ferraris on the interstate.

The hotel remained open to the public all weekend. Hours before the event, the atmosphere at the hotel was relaxed, as if nothing special were going on. Police cars passed by the front entrance a few times, but security remained minimal.

Hotel guests flooded into the Hunt Room, a basement tavern, about 5 p.m., some hoping to catch a glimpse of stars walking into the wedding. A few people grabbed drinks and loitered around the front entrance of the hotel until they were asked to move along.

About 6 p.m., security guards packed the main lobby and asked people not in the wedding party to go to The Hunt Room or Becca, the main restaurant.

Trey Brice, a Virginia Beach resident who knows the bride, said he saw Kardashian and West – the producer for Pusha T’s latest album, “Daytona” – enter through the service entrance in the basement near the Hunt Room around 6 p.m.

Kardashian posted videos to her Instagram story of herself and West getting ready in a hotel room.

Around 6:25 p.m., Pusha T, wearing a white tuxedo, walked with Pharrell into the Raleigh Room on the way to the ceremony.

About a half-hour later, the newlyweds re-emerged. The bride, wearing a floor-length white gown, and the groom left the Great Lawn Loggia, where the ceremony was held, and hotel workers began carrying in appetizer plates and champagne flutes.

Hayden Harris, 14, and a friend, Maria Dotolo, 13, came to The Cavalier to catch a glimpse of the bride and groom. But their real hope: a photo with Kardashian.

“We were probably 50 feet from Pusha T, and that’s closer than our friends could say,” Dotolo said. “We are going to make all of our friends jealous.”

They left the hotel without snapping a photo with Kardashian, but with an experience they won’t soon forget.