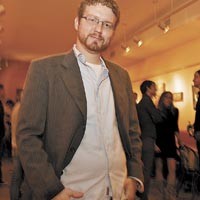 Rand Burgess has been mugged at gunpoint at Grace and Lombardy streets, and once had a pair of knife-wielding crack heads break into his home — with one man stabbing him and with Burgess stabbing back in self-defense — but he still wouldn't dream of leaving the city.

“I like that idea of living, working and playing in the same neighborhood,” Burgess says. “And there's a strong sense of community here.”

A Virginia Commonwealth University grad who worked restaurant jobs from his youth, Burgess bought a house in the crime-plagued Newtowne West community when he was 22. From the start, he took an active role in the neighborhood, where drug deals take place nightly on the streets, he says, “sort of like [the TV show] ‘The Wire.’” He serves as assistant treasurer of the local civic association, tutors neighborhood youth and, an avid kayaker, spearheads an annual tubing trip for them on the James.

But his passion is the service industry. Burgess is tossing around a new motto for his ironically nonsmoking restaurant and club, the Camel, which plays on the Toad's Place slogan, “Where the legends play!”

“The Camel: Where the locals play” he says.

The Camel was originally conceived as an all-purpose community spot by longtime local activist Alan Schintzius and his family. But Burgess says, sadly the family has moved on, and now he plans to focus on the restaurant and local music offerings.

His favorite quote, posted on his MySpace page, comes from a former VCU teacher: “If you think you can or can't, you're right.”