Food Review: Grace Noodle brings on the steaming ramen bowls, if not the ambiance. 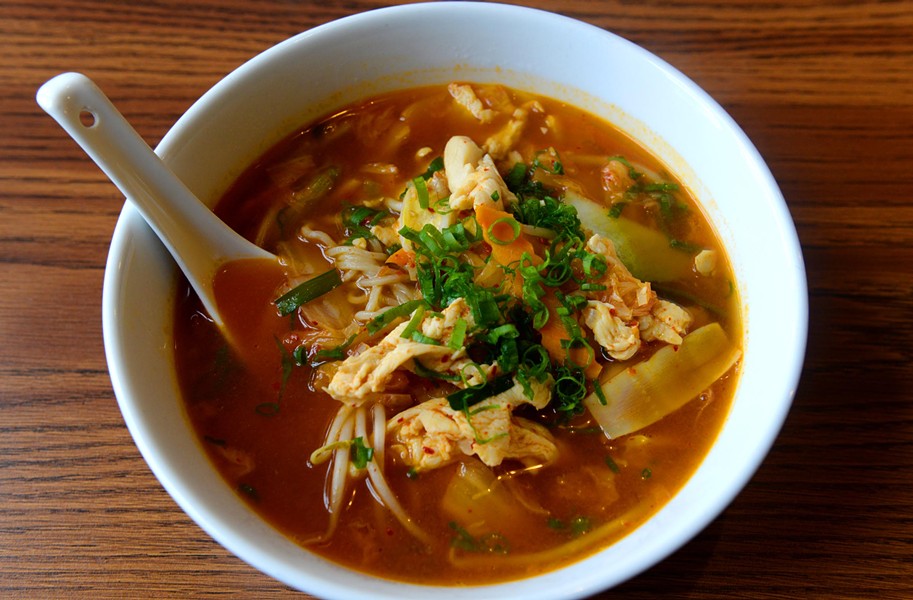 Scott Elmquist There are plenty of ramen choices, including kimchi ramen, at Grace Japanese Noodle & Restaurant.

Remember that whole grilled ramen thing? The one where poor Maruchan-brand noodles were plopped on the grill until they resembled a squiggly piece of charcoal? This tricked-out recipe has an interesting back story, and you can see a glimpse at Grace Japanese Noodle & Restaurant on East Main Street.

Ramen history tells us that Chinese cooks experimenting in Japan put wheat noodles with soup broth — and ramen was born. They were quickly integrated into Japanese cuisine.

Grace Noodle's gomoko yaki soba ($9.50) is composed of noodles that are quickly grilled to create a light char and then tossed with vegetables and varying meats. The chicken and shrimp version is mixed in a sauce with hints of oyster sauce, soy and sesame. Generous pops of ginger and bits of bok choy add color to this hearty and easily sharable dish.

This particular yaki soba isn't the only Japanese-to-Chinese transformation at Grace Noodle. Kung Poe chicken (the Edgar Allan Poe Museum sits across the street — get it?) and marbo tofu provide good company to the other dishes.

Grace Noodle's menu reads like a Wikipedia listing for ramen. From shoyu, a soy-based broth, to tan tan, a spicy Sichuan broth evoking dan dan noodles, there are 13 varieties to quell any craving. Substantial portions abound — although who shares ramen or takes it home to watch the noodles disintegrate slowly in complicated broth?

Kimchi ramen ($9.50) may smell overwhelming, but its fishiness is tempered by the depth of its broth. The char su ramen ($9.50) is the blandest of the choices. Substantial pieces of tender pork settle in a light, barely there pork broth, with nondescript bamboo shoots and limp onions. But the shoyu and shio versions are smart translations and bear more than a passing resemblance to other well-known ramen spots inside and outside of town. Each broth is distinct and accentuates soft, house-made and -cut noodles with little of the expected push-pull snap that other ramen houses are known for.

Hiyashi chukka ($8.75), a cold noodle dish, is curious. A mound of curled, cool noodles is topped with crab meat (crab stick, actually), sliced pork, seaweed and American salad fixings such as tomato and iceberg lettuce. As odd as the combination sounds, it works.

Marbo tofu ($8.50) is westernized well. Soft tofu is cautiously balanced with Italian-spiced ground pork. There's an option for chicken, but it's less flavorful. The ingredients are suspended in a tomato-based soup that has a whiff of Sichuan peppercorns, giving the dish some of the noticeable burn after a couple of bites.

The only real appetizer is gyoza ($5.99), house-made dumplings. Six small dumplings are served with little fanfare, no appetizer plates and barely enough of the rice-vinegar-based dipping sauce. Still, the translucent wrappers are full of minced chicken and vegetables with scallions and garlic.

The lack of frills is as much of a given at Grace as the better-than-average ramen. The ambiance is underwhelming: Even though it's full of pretty wood and brick like so many Shockoe Bottom buildings, the restaurant isn't a looker. A curtain separates patrons from the kitchen and a flat-screen television sits in the corner above the bar. Drinks arrive in cans or old-school orange juice glasses á la Waffle House. Service is either overly attentive with extra cafeteria paper napkins or nonexistent while you slurp your soup alone.

But it's tempting to forgive Grace Noodle for its uneven service and aesthetics. It's ramen, after all, originally a poor man's food, and its surrounding don't have to be pretty. It is supposed to be affordable though. Although ramen's initial beginnings are uncertain (Chinese or Japanese?) there's one sure thing: It has sustained generations of college students as an alternative to expensive meals. At prices that begin at $8.50 and more per bowl, this ramen can't replace its cheaper sibling. And that's unfortunate, because Richmonders are always looking for a new addiction — especially one that's affordable. S