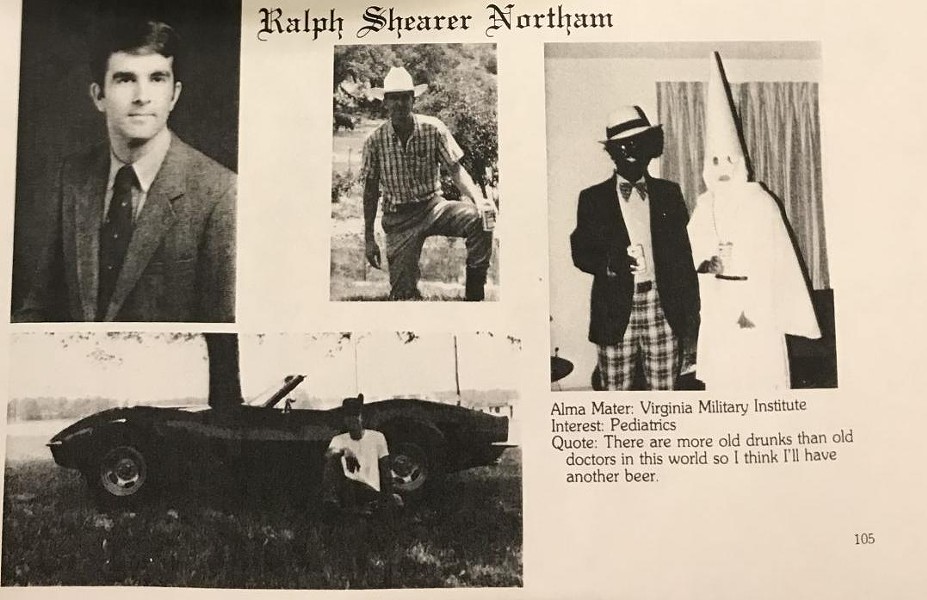 Governor Ralph Northam has released a statement apologizing but not identifying which of the two men he was in the photo:

"Earlier today, a website published a photograph of me from my 1984 medical school yearbook in a costume that is clearly racist and offensive.

I am deeply sorry for the decision I made to appear as I did in this photo and for the hurt that decision caused then and now.

This behavior is not in keeping with who I am today and the values I have fought for throughout my career in the military, in medicine, and in public service. But I want to be clear, I understand how this decision shakes Virginians’ faith in that commitment.

I recognize that it will take time and serious effort to heal the damage this conduct has caused. I am ready to do that important work. The first step is to offer my sincerest apology and to state my absolute commitment to living up to the expectations Virginians set for me when they elected me to be their Governor.”

NORFOLK- A photo from Gov. Ralph Northam’s medical school yearbook shows two men, one in blackface and one in a Ku Klux Klan robe and hood, on the same page as the governor.

The photo, which The Virginian-Pilot obtained a copy of Friday from the Eastern Virginia Medical School library, comes from the 1984 yearbook, the year Northam graduated.

On the half-page set aside for Northam, there is a headshot of him in a jacket and tie, a photo of him in a cowboy hat and boots and a third of him sitting casually on the ground, leaning against a convertible.

The fourth photo on the half-page has two people, one wearing white Ku Klux Klan robes and a hood, the other with his face painted black. The person with the black face is also wearing a white hat, black jacket, white shirt with a bow tie and plaid pants. Both are holding canned drinks.

It’s unclear who the people in costume are.

The governor’s office did not immediately respond to requests for comment Friday afternoon.

Under the photo of the men in blackface and the Klan hood are listed Northam’s alma mater, Virginia Military Institute, and his interest: “Pediatrics.” His quote is listed as “There are more old drunks than old doctors in this world so I think I’ll have another beer.”

The photo came to light after a week in which the Democratic governor came under fire for his comments about a bill introduced by a first-term Democratic lawmaker that would have loosened restriction abortions in Virginia.