Rallying Point: Richmonders Travel to Washington For the Biggest Protest in U.S. History

Scott Elmquist Richmond protesters join the Women’s March on Washington on Saturday, Jan. 21, which brought hundreds of thousands to the nation’s capitol the day after President Donald Trump’s inauguration.

There are no complaints about the wake-up call.

Many of the women who arrive at the Target parking lot at 6 a.m. have children, so sleeplessness isn’t unusual.

Clear plastic backpacks, purchased for today or dug out of basement boxes, are packed with energy bars, water bottles, aspirin and phone chargers. Extra doughnuts are handed out to strangers. Poster materials are pooled.

They’re all on the same team here, boarding one of 30 buses idling in the fog on Forest Hill Avenue. Fears for the future are shared like hand warmers.

Kim Murphy is worried about how to teach her 4-year-old daughter to be kind in a country that elected Donald Trump to its highest office.

“There are all these behaviors we’ve been teaching her are inappropriate that have been normalized,” Murphy says. “And then he gets given a blank check to say and do whatever he wants.” 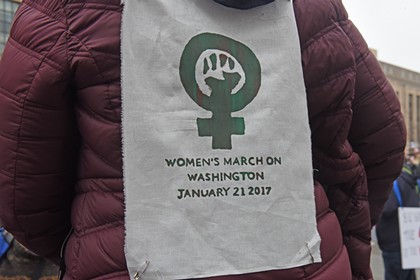 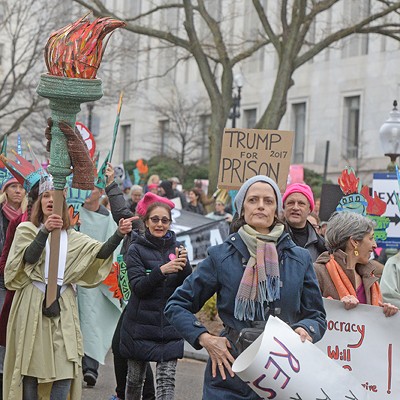 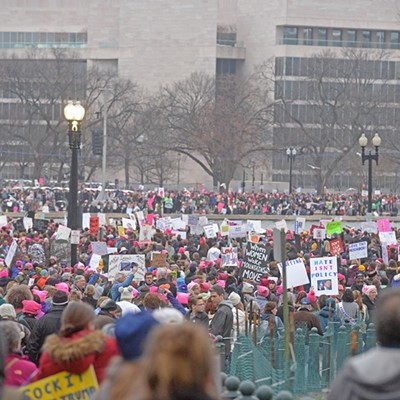 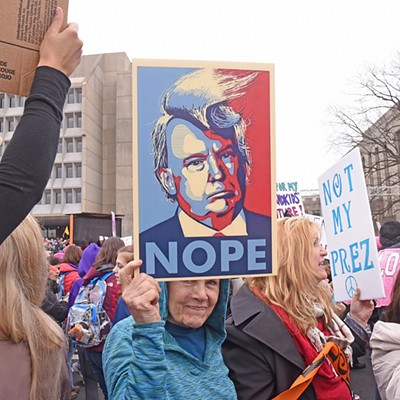 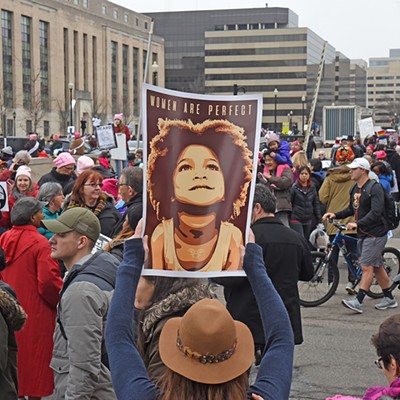 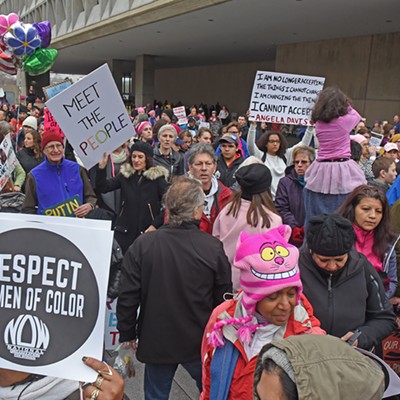 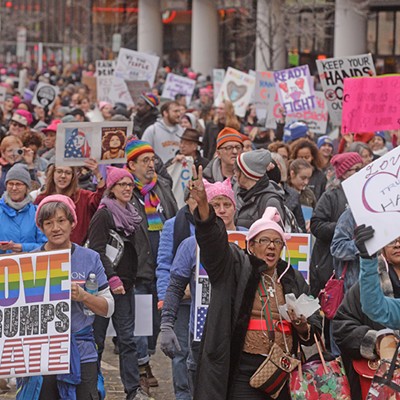 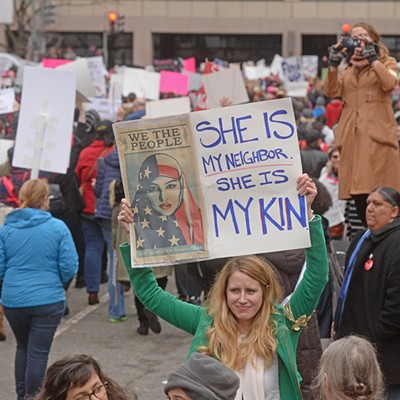 Megan Sommers wants to raise her 2-year-old son to be a better man, she says: “The way our now president conveys what it means to be a man is not appropriate.”

Mary Wilson works for the state on child-abuse issues and was disturbed by Trump’s campaign rhetoric.

“I recognize bullying behavior when I see it,” Wilson says. “Taking us back to when America was great again — I’m a little fearful of what that might mean.”

Murphy, Sommers and Wilson — and hundreds more, at least — are among Richmonders joining what may be the largest protest march in U.S. history Saturday, Jan. 21. Rallying in support of a host of progressive policies, they headed north to march against Trump and the principles his administration stand for on the day after his inauguration.

The Women’s March on Washington overshadows Trump’s first full day in office. And Richmond is there.

“Especially living in North Side, you’re around a lot of people that think like you, and have the same kind of goals and values,” she says. “This election was kind of jarring, like things aren’t necessarily the way I believed them to be.”

Sarah Blackburn has voted only in presidential elections, she says: “I knew what my opinions were, but that’s pretty much it.”

It’s the first march or protest for some of the women heading up Interstate 95. Murphy says Richmond’s thousand-strong March on Monument on Jan. 14 was the largest such event she’d been to until today.

As for Trump, it’s not that he’s conservative, Sommers says.

“I understand and I kind of expected things to swing back,” she says. “It’s his lack of experience, his lack of respect for the position. His speech yesterday sounded like he was still campaigning. The campaign’s over — it’s time to lead us.”

Organizers and attendees say the march isn’t an end to the fight but a beginning, a rallying point for action and a reminder of women’s collective sway.

“I’m here to have my voice heard with other women from the country,” says Wilson of Henrico County. “That we’re here and we’re the majority, and our opinions count and women’s rights still count.”

She has two daughters and tries hard to instill girl power in them, she says: “They may have to try harder than boys, but nothing is off the table as far as what they can accomplish.” 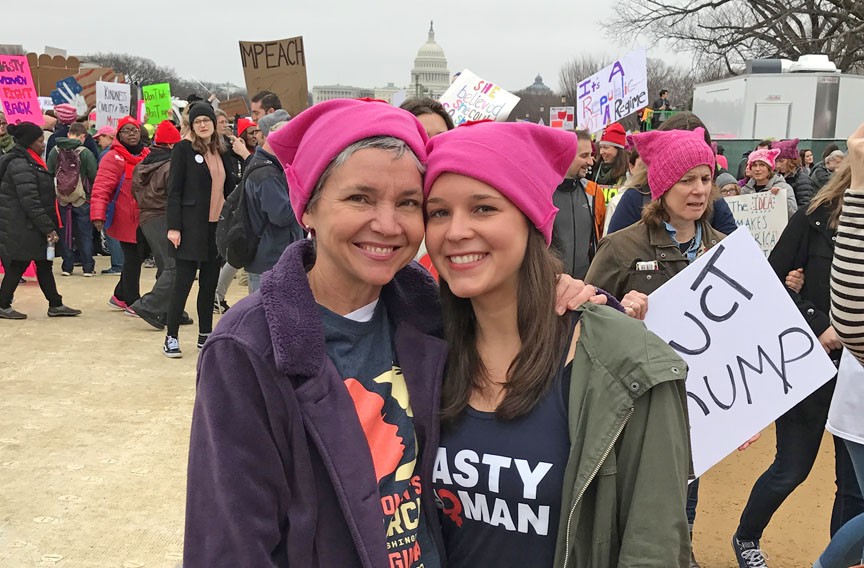 A few hours and one rest stop later, the bus crawls across the Potomac River. Passengers stare and wave into each other’s packed buses, cars and taxis. Some cars drop off attendees on the Virginia side, and they start the last few miles on foot.

“I see pussy hats!” one young woman says to her mother. She means the pink knit hats with two earlike peaks, a ubiquitous feature in the crowds.

Many people arriving from Richmond decide to walk the two miles west from the bus-filled lots of RFK Stadium to the Capitol. The Washington Post reported this month that six times the number of buses applied for city parking Saturday than for the inauguration.

Abigail Wilson, Mary’s 15-year-old, drapes a Virginia flag across her back for the hike. Her mother carries a poster version of the state seal. She’s colored the hair of the vanquished tyrant at bottom orange.

“The problem is it’s not just one thing,” Sarah Blackburn says. “It’s the whole platform.” She mentions body autonomy and reproductive rights as her animating causes.

Howells was politically active when she was younger, she says, protesting the war in 2002: “Then we went into the Obama administration, we kind of had this lull, this easy lull, so you didn’t have to stay as up on things.” 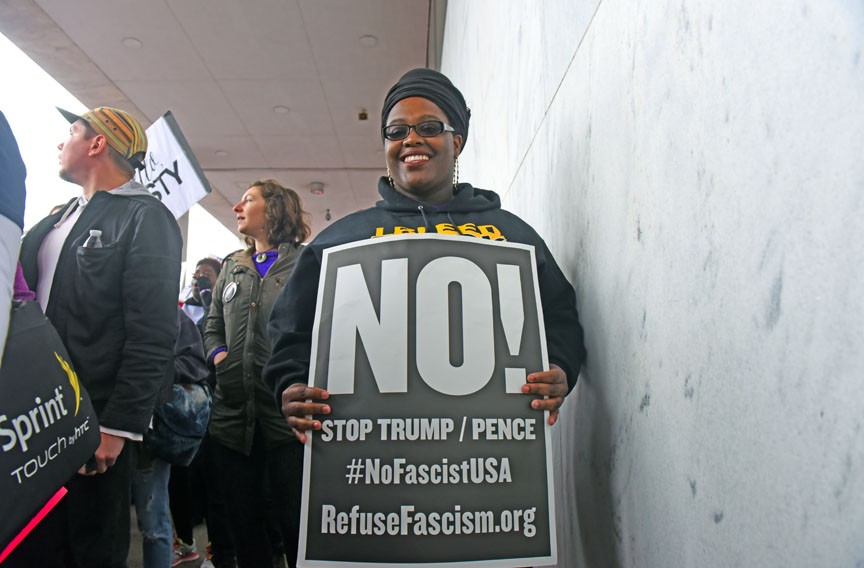 Beyond the Capitol, walkers merge into a nebulous hive. Bodies are everywhere, filling streets and blocks throughout the National Mall.

Despite several jumbotrons, a vast percentage of people cannot hear the official speakers or music. Groups jostle a crowd one way, only to find they’re going nowhere and begin a massive game of telephone to turn around.

Somewhere, a large group of nurses from New York begin a rogue march south on Seventh Street, and others follow. A police officer stands on an ambulance and uses a speaker to direct people back toward Independence Avenue.

But everyone seems unconcerned by the chaos, content to be part of something they know is big. They take pictures of themselves and their favorite signs. They marvel at the crowds. They start their own chants. They smile, even though no man told them to.

The official march route put forth by organizers turns out to be a mere suggestion for many, unable to find where the crowd begins or ends.

“I’m just here to promote women’s rights and to be part of an historical event,” Abigail Wilson says.

“I thought it would be really cool to be part of something so big,” says Karen Bartley of Chester. “All these women coming together in one spot is just incredible.”

Bartley isn’t worried about people who don’t understand why they march, she says, calling it energizing to be around a varied group of women and feel connected to people and movements across the world.

Bartley is here to know she’s not alone in opposing those forces. 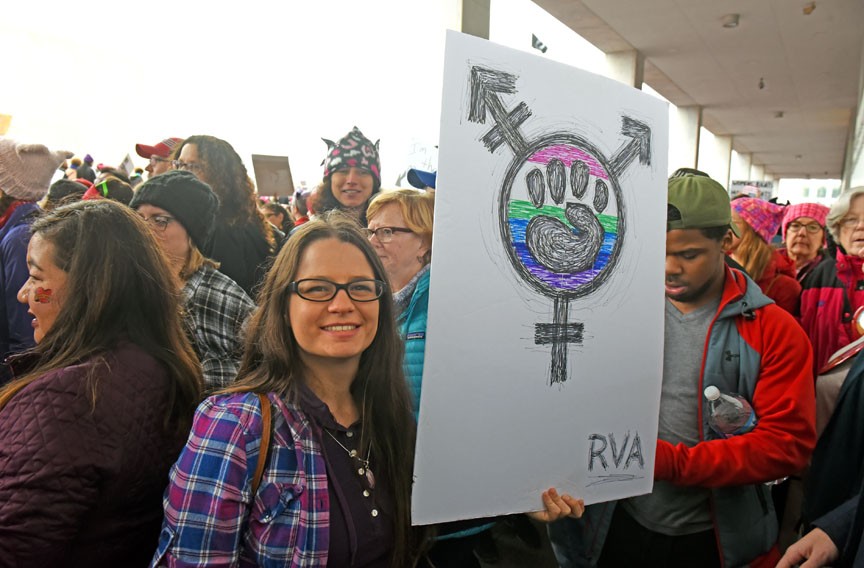 At a Capitol Hill bar, women take over the men’s bathroom to escape a long line for their own. Two women kiss and hold each other after a long day.

Sen. Elizabeth Warren comes on muted screens playing CNN and a cheer goes up from the bar crowd. A busy bartender quickly replaces the music with TV audio, as CNN replays snippets from women’s marches across the country. Many are hearing the Washington speeches for the first time.

“One point two million,” someone says, getting back on the bus near RFK to return to Richmond. Comparisons are made to photos of empty bleachers at Trump’s inauguration.

In a news conference that night, Trump’s press secretary, Sean Spicer, casts aspersions at inaugural numbers reported by media outlets, and Kellyanne Conway, counselor to the president, goes on cable to promote what she describes as “alternate facts” about attendance numbers.

Official numbers will be difficult to come by. Low-end estimates put the march at 500,000. March organizers say it was more than a million. Typical methods for collecting such data aren’t available in Washington because airspace is closed. A figure collected with weather balloons by a digital imaging service should be released this week.
Pictures tell the best story: It was big.

“A bigly march,” someone says on the bus, appropriating a Trumpism. 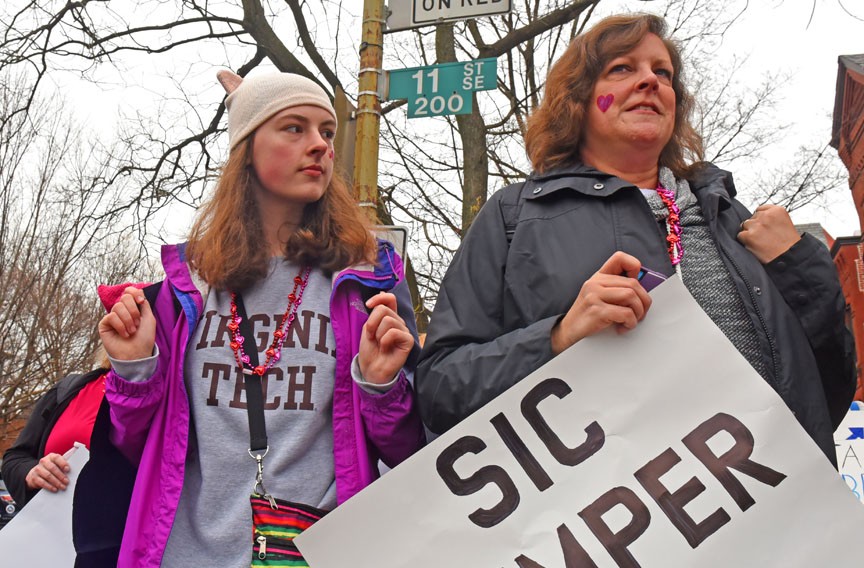 Less up for debate in this crowd are other numbers referred to on many signs at the march: 80 cents to a man’s dollar in pay, 44 years of reproductive rights now imperiled, one in four women sexually assaulted in their lifetimes, a $7.25 minimum wage, 50 percent higher incarceration rates for black women and so on.

“I can’t even imagine what it’s like for older generations, like, ‘We went through this,’” Sommers says. “But what’s been interesting to me is seeing the intersectionality of feminism talked about. Like, ‘Hey, we’ve left out huge swaths of people’ — that has got to change. It’s not just about us as white women, it’s about all women, and all people.”

Murphy says work remains, even among fellow feminists. “There have to be some really uncomfortable conversations,” she says. “I think people tend to avoid that.”

Conversations happen in the bar, on the walk to RFK and in the bus lot.

“It was such a nice turnout — I mean, a strong, amazing turnout. ‘Nice’ is kind of an understatement,” Hannah Abrams says, laughing. “We were saying what a peaceful march it was. I didn’t hear anyone saying anything hostile. Or even negative.”

She and Amelia Hutchins are part of a group of five, ages 12 to 50, from Wilmington, North Carolina, where buses sold out. They crammed into a Richmond hotel room Friday and Saturday nights to take a bus from Forest Hill Avenue.

They wait to leave Washington at the end of the long day, not regretting the trouble or expense to come.

“Everyone feels motivated,” Hutchins says. “They feel like they need to go home and get involved in local politics and do what they do to keep the momentum.”

The Women’s March website is trying to capture and direct that energy. On Sunday it posts the first of 10 actions: Email postcards to your senators.

Reached by phone, Murphy lists all the Democrats who represent her on the local, state and national levels. “We were talking about it and it’s really hard to do a call to action like email your legislator,” she says, “because they already get it.” 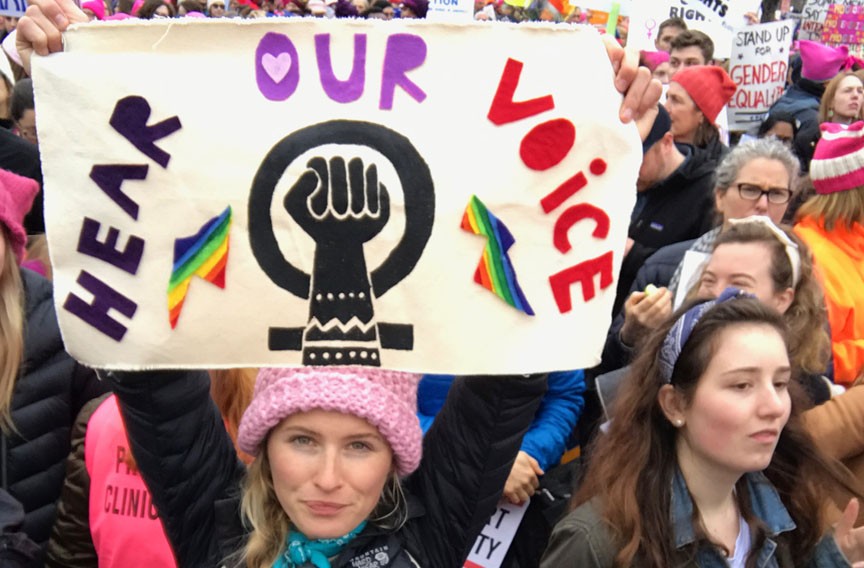 March organizers also announce the beginning of training for 500 women nationally to run for office. Murphy says she’s considered running for office, but for now she’ll stick with donating and volunteering in districts that aren’t so blue.

“It was really inspiring,” she says of the march. “It was so good looking around and seeing others, all marching for different reasons, but it all felt so inclusive.”

She says she got emotional watching march chants drown out a handful of anti-gay counterprotesters. And the walk to and from the bus, in a Capitol Hill neighborhood full of friendly signs and free coffee, was a highlight.

Editor's note: This story reflects a correction from the print version, in which we incorrectly identified President Trump's press secretary, Sean Spicer.