Thousands join student-led March for Our Lives in support of stricter gun laws. 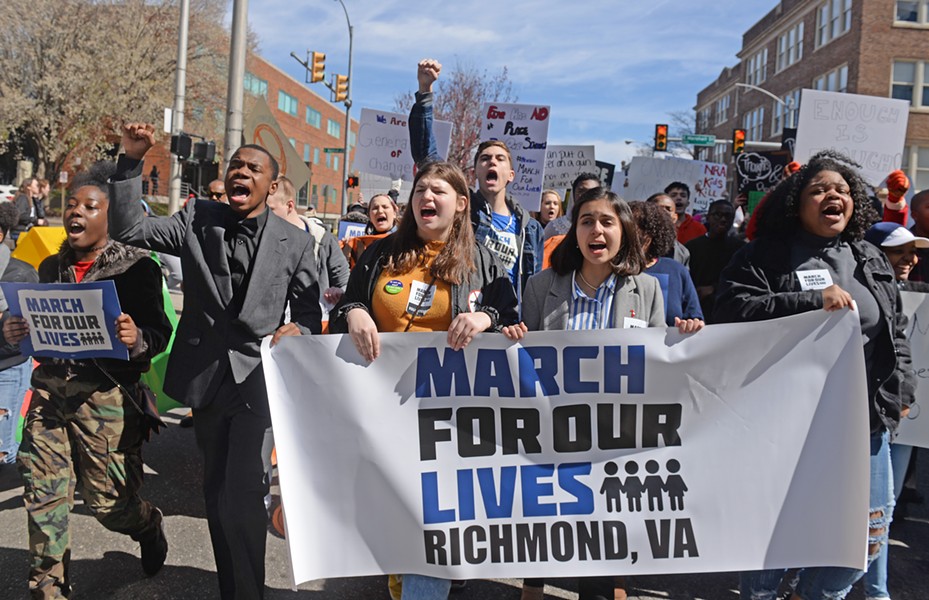 Scott Elmquist Students marching through the city to the Capitol on Saturday, March 24.

Against the backdrop of Mosby Court, a public housing neighborhood where two teenage boys were shot earlier this month, thousands of people mill around in front of Martin Luther King Jr. Middle School Saturday morning.

It's just before the start of the Richmond March for Our Lives. High school students, young children and families carry signs with phrases like “There should be a background check before the NRA is allowed to buy a senator” and “ Kids are not bullet-proof and you are not ballot-proof.” Volunteers with clipboards remind attendees to register to vote, and representatives of the Coalition to Stop Gun Violence hand out round stickers featuring an assault rifle crossed out in red.

This isn’t Marie Stella’s first rodeo. The 74-year-old Chesterfield resident marched with Martin Luther King, Jr. in the 1960s, participated in sit-ins protesting the Vietnam War, and traveled to the nation’s capitol last year for the women’s march. And as motivated and inspired as she is by the students behind the movement for gun reform, she says it’s disheartening that young people have to step up.

“I feel like children have to come out to fight for their own lives because adults haven’t, and I want to be here to be a shield or a bodyguard to just say ‘I’m here for you,’” says Stella. “But I think we failed dismally. Adults have failed dismally. It’s just outrageous that we have to ask children to stand up to defend themselves.”

Before the march to the Capitol begins, organizers, students and politicians take the stage atop a bus to address the rapidly growing crowd. One of the first speakers is Richmond Public Schools Superintendent Jason Kamras.

“Congress and the General Assembly, of not just this state but other states, have a hard time finding a way to do anything because of the power of gun manufacturers and NRA leadership,” Kaine says to the crowd. “But they’ve never had to come up against high schoolers.”

Kaine goes on to note the news that Citibank, one of the largest financial institutions in the country, is now limiting their business interactions with gun manufacturers.

“They never did that before high schoolers got involved,” he says.

Short Pump resident Cortney Carroll was near the stage at the Oct. 1, 2017 Jason Aldean concert in Las Vegas when a gunman killed 58 people in the largest mass shooting in American history. Since then, she has spoken in support of gun reform legislation at the 2018 General Assembly session, attended her first concert since the shooting and participated in Richmond's March For Our Lives on Saturday, March 24.

A day after the march, Carroll sat down to discuss what the march was like for her, as she wore a Route 91 Survivor sign. Video by Charlotte Woods.

Among the local students to speak before the march is Chaz Nuttycombe, a senior at Hanover High School in Mechanicsville.

“I’m 18 years old. That means I cannot purchase alcohol, I cannot rent a car, or run for a seat in our state legislature. But for some reason I can go into a store and purchase a weapon of war,” he says. “But I can also vote.”

The crowd cheers him on as he addresses children and younger teenagers in the audience, reminding them that even if they aren’t yet old enough to vote, they can still get involved by volunteering or interning with campaigns for candidates who support “common sense gun regulation.”

After about an hour’s worth of speakers, energetic marchers take to the sidewalk, ready to walk from the school, across the Martin Luther King Jr. Memorial Bridge, to the bell tower in Capitol Square.

Senator Kaine blends in with the crowd for the mile-long march and answers a few questions along the way. A Richmond native who was Governor of Virginia in 2007 when 32 students and faculty died in the April 16 shooting at Virginia Tech, Kaine describes a longtime partisan battle for gun reform.

“You cannot get Republicans to stand up against the NRA, because the NRA is such a big funder of their campaigns,” he says. “When I say the NRA, I mean the NRA leadership and the gun manufacturers. It really is the gun lobby. NRA members support background checks, but the organization no longer speaks for its members, it speaks for gun manufacturers. This has been a huge obstacle to making progress.”

But the issue hasn’t always been so divided by party lines. Kaine says he recently spoke with former Virginia Senator John Warner, a Republican who co-sponsored the Federal Assault Weapons Ban of 1994. Bipartisanship existed in the ‘90s, he says, but it’s different now.

“I’ve co-sponsored and voted for bills for years, but we always fall short, and sadly it’s become a very partisan issue,” Kaine says. “We can get Democratic votes to support meaningful measures but we can’t get Republican votes. But again, the activism of the kids is starting to help us win over people who haven’t been willing to stand up.”

Some of his Republican colleagues have implied that if Congress does “a few things, maybe they’ll go away,” but Kaine doesn’t think the student-led movement will back down any time soon.

“We need to stay at it. We’ve got to get universal background checks, we need to get some form of either an assault weapons ban or high-capacity magazine ban. We have to,” he says. “These youngsters are changing the dynamic and it feels very different on Capitol Hill now.”

At the end of the march, which culminated in front of the State Capitol building, Community High School students Ariana Shahidi and Alvaro Jimenez are inspired and energized.

“I just think enough is enough, and i’m just ready for there to be change, says Shahidi, who’s 17 and heading to the University of Virginia this fall to study political science. “I’m going to do whatever’s necessary, and I think my generation has the power to do that. And anyone who undermines our ability must be living in another century.”

Shahidi joined her mom in canvassing for Democratic campaigns when she was 8, and now that she’s nearly 18, she can’t wait to cast her first ballot. “I will be a part of voting in the midterm elections,” she says. “I am so excited.”

Her friend Jimenez, also 17, won’t be voting in November — but that’s because he’s from Spain, visiting the U.S. as a foreign exchange student for the school year. “In Spain there’s no gun culture, because there are no guns,” he says.

Jimenez envisions a future in this country. And even though he didn’t grow up practicing active-shooter drills in the classroom, he didn’t think twice about getting involved in the student-led movement.

“When I came here, they told us that we should be careful because guns are legal, which scared me at first,” he says. “When I came here and saw what happened, it made me so sad. Teenagers can make change. If we don’t go out and say what should change, who else is going to say it?”