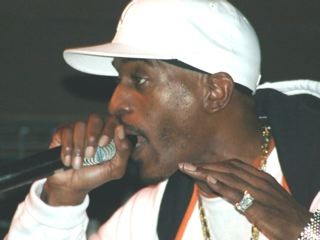 It's been a long, long time since Rakim has played Richmond. His last memorable appearance was in the 1980s, back when he still performed with his former partner Eric B. Since then, the revered lyricist has dropped albums sporadically, (the last one, “The Master” was released in 1999.), and settled into his role as an elder statesman of hip-hop, living off his reputation and catalogue. It's a luxury that most rappers his age can't afford.

When you're an icon, you don't have to work hard to earn the respect of the audience. But Rakim, born William Michael Griffin Jr., was a gracious performer, offering more than an hour of grown man rap for a half-full Hat Factory of grown men. He strolled onstage, supported by Technician the DJ, to “Holy Are You,” the first single from his soon- to-be released album, “The Seventh Seal.” The song is typical of his later material, superior lyrics with a so-so beat, but that mattered little to the animated crowd: The god was back.

“I ain't been to Virginia in a long time. It's been a long time,” he says after performing his hits “Eric B. is President” and “My Melody.”

It hadn't been long enough for his fans to forget. The audience, which appeared to be comprised of aging b-boys who purchased his material on cassette and vinyl, finished many of verses for him as he acted out the lyrics. Kids, this was your father's Rakim and he still ain't no joke.

The diminutive rapper ran through full versions of his classic material, including “Move the Crowd,” “Microphone Fiend,” “What's on Your Mind,” and “I Know You Got Soul.” He delivered the soulful ode to a beautiful woman, “Mahogany,” while seated on the stage with his eyes closed and didn't lose the crowd.

But at least one person in the crowd seemed lost. A woman near the front yelled incessantly for Rakim to perform “It Takes Two,” a song recorded by Rob Base and DJ E-Z Rock. Her misplaced request left nobody smiling in a room full of people with an appreciation of hip-hop history.

It was a good night for people who came of age during the Reagan administration. The show started with the Virginia-based trio, “The Soul Logistics,” who served up nostalgic sounds and a spirited presentation. Rhymefest, a Chicago-based rapper known for his freestyle skills, stuck to his popular songs for the most part. A brief detour from his rehearsed lyrics included references to Richmond neighborhoods, Croaker's Spot and Richmond-based rapper Skillz. Both groups would be fortunate to enjoy a career as long as the headliner.

The rapper's voice is a unique sound that symbolizes a certain period of time for people who heard it, similar to David Ruffin's raspy vocals or Al Green's falsetto. The distinctive monotone and the complexity of his lyrics were a contradistinction to the sounds of the day back then and still are. If you're talking about the greatest rappers ever, you're talking about Rakim.