Club Aristotle, a private South Side nightclub, opens with a greater purpose. 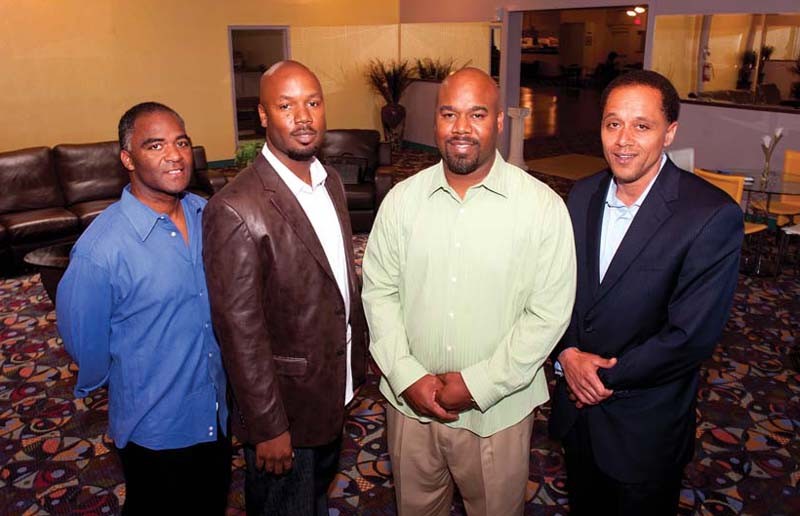 Illya Davis had an idea: to establish an open space where motivated young people could rub elbows with and receive instruction from people who’ve found success in the building trades, such as plumbing and air-conditioning repair.

The owner of Anytime Plumbing, Davis also wanted to create a training center where that instruction would be provided free. But how to pay for it?

That question led to a more novel idea. Black professionals in Richmond spend millions of dollars each year frequenting nightspots such as the Funny Bone Comedy Club and Restaurant in Short Pump and the Martini Kitchen and Bubble Bar on Main Street. So why not open a private nightclub to defray the cost of training?

Davis and his partners, brothers Bill and Kevin Kemp, recently launched Club Aristotle in a nondescript hulk inside a strip shopping center near Belt Boulevard and Hull Street in south Richmond. Half of the 15,000-square-foot space is a cavernous lounge, with couches, stage and other nightclub accoutréments. Separated by a hallway is the proposed training center, where the nonprofit’s organizers hope to hold classes for some 40 to 60 students at a time.

The proceeds from the club and the dues paid by club members will go toward providing vocational training, Davis says.

“For us and for the members, it’s a way to give back,” Bill Kemp says.

The group is still seeking grant funding to help pay the cost of providing job training, Kemp says, “but we don’t want to rely on it as our primary source.” The curriculum will be designed to prepare students to pass the required state certification exams in their chosen fields.

To do it, the group will have to break through some red tape.

Kirsten Nelson, a spokeswoman for the State Council of Higher Education, says that to operate a private, vocational training center, the group may need to apply for certification from the state. Kemp says that people associated with Club Aristotle are pursuing certification, but declines to go into detail about the process.

“There are also nonprofit organizations that we are working with who already have received certifications,” he says, “who are telling us that they want to use our space to teach a class.”

For now the club’s membership is limited. The partners are hesitant to say just how much more money they need to begin instituting the training programs. Kemp says the nonprofit has set a goal of recruiting 1,000 members, but only 30 or so are signed up. “We hope to have the training center running in six months,” Kemp says.

Reaching that goal may be a daunting task. Despite an estimated $20,000 worth of renovations and repairs, the building’s interior remains a work in progress. And it will be competing for business with established, more centrally located nightspots.

But the partners remain hopeful that the project can be successful. Club Aristotle offers free and convenient parking, diverse entertainment and safe but lively atmosphere, Kemp says: “The market is wide open.”

The partners are betting that the service component of the project will draw people in. “Everyone has a helping spirit within them,” Davis says. “By joining here, they can put it to use to help kids in the community who are trying to help themselves.”