By turning the Bottom into the top of the medical world, we would be in a unique position: No other such complex in America would be a destination — within a short walk of the high-speed rail line being planned for our part of the country. 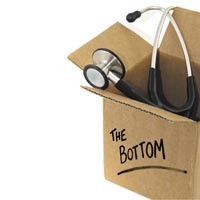 Looking for a bold vision to turn Shockoe Bottom into a catalyst for the future of Richmond? Then forget baseball. The future is medicine.

As the Jim Crupi report pointed out two years ago, the failed status quo continues to bet Richmond's future on using public money for projects aimed at getting residents, their invited guests and tourists to eat, drink, smoke and be merry downtown. According recent state reports, Richmond ranked last in job creation of any city in the state, had the oldest school facilities, and on a per capita basis the most expensive local government along with the least cost-efficient services in such areas as health care, transportation and economic development.

Federal, state, county and local governments are now the major employers in the metro area, with Wal-Mart soon to become the largest private employer.

The Obama administration has warned that the successful cities of tomorrow will be those with public and private sectors combining in such areas as technology, health care, medicine, public education and green industries. Sadly, the people of Richmond have been shown no such plan to make us competitive in a single one of these areas.

Until here and now. While past missteps have reduced available options, we do have successes ready and able to provide building blocks for a bold vision. Up the hill from Shockoe Bottom is the Virginia Commonwealth University Health System, a medical and nursing school, the Massey Cancer Center, and the nearby Virginia BioTechnology Research Park.

With additional resources, and a bold new public-private partnership, they can be the foundation to build a world-class medical complex centered in the Bottom.

By 2020, we can give downtown Richmond a true field of dreams to rival those health care venues in President Obama's cities of the future. Close your eyes and envision the green acres of a futuristic medical complex rivaling the best in America. Try to see, for example, advances such as gene-based technology tailoring treatments to meet people's gender, racial and ethnic origins.

The area's specialties could also include cutting-edge biotechnology, through frontline advances in addressing the needs of the population which lives longer all the time, and taking the lead in community medicine sure to be demanded by the coming national health care plan.

This complex would not only serve patients in need, but offer world-class training to the next generation of medical professionals, lure innovative medical software companies and provide the perfect venue to house a new science high school.

In terms of community medicine, envision a state-of-the-art community health center, accessible right to the front door from anywhere in Richmond, by putting the GRTC System transfer station next to Amtrak's high-speed rail station.

By turning the Bottom into the top of the medical world, we would be in a unique position: No other such complex in America would be a destination — within a short walk of the high-speed rail line being planned for our part of the country. The facility would be an employment machine, thus attracting residential and retail development and eventually revitalizing the East End to the Henrico County line, where a commuter shuttle could run on the train tracks that run parallel to the James River.

But this vision cannot happen unless city government takes the lead in bringing together the necessary players, and passing the legislation needed to create a public-private partnership — a first-ever downtown medical authority — to coordinate the planning and collective financial support needed from the key stakeholders. Between Virginia Commonwealth University, state government, and leaders in private-sector health care, we have the talent to mesh all the moving parts, but City Hall and City Council have to get the ball rolling.

The national health care plan certain to be passed by Congress this year is going to encourage the very type of world-class innovation and community effort envisioned here. Hundreds of millions of dollars would be needed as seed money, with several times more than that amount to be ultimately invested. Additional, if not greater, investments could then follow in future years.

All the key partners would have to do their fair share at different times. The city can well afford her limited investment role. As I demonstrated several years ago, the scheduled payoff of old city debt, along with the coming expiration of property tax exemptions granted by the historic real-estate-tax abatement program, allows Richmond the financial flexibility to reach for the future. Moreover, the General Assembly earlier this year dedicated certain locally generated tax revenue to fund a Shockoe Bottom baseball stadium. Would not the same principle apply to building a medical complex capable of saving the lives of countless Virginians?

It would take no more than six months to fully develop a detailed plan. Then another six months to determine whether this vision can attract the necessary financial and intellectual capital. By 2010 we could be breaking ground, and by 2020, Richmond could have a new place on the national map.  S