A drenched but upbeat Williamsburg ushers in the Kaine era. 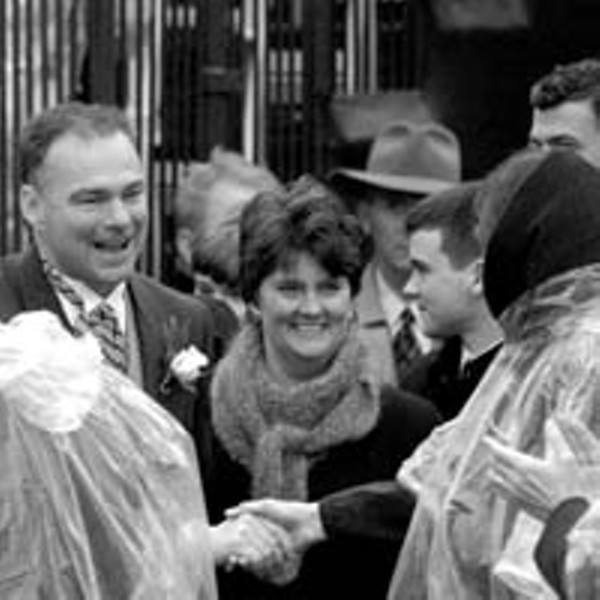 The umbrella crowd — the brave, the loyal and those that just love a spectacle — huddle stoically along Duke of Gloucester Street to await the inaugural procession. Leading the march will be three open carriages carrying the state's newly sworn high officials and their families.

Exiting the Colonial capitol, the Bollings and McDonnells are the first to crawl into their carriages: They disappear under plastic ponchos and umbrellas. Ten rain-soaked minutes later, Virginia's new first family emerges. Bareheaded and sans umbrellas the Kaines are escorted to their carriage.

It is the Kaines' day, and they aren't going to be obscured under strata of plastic and bumbershoots.

Before the parade, however, almost everyone else opted for the identical, clear plastic ponchos. As they waited for their new governor to arrive, they had little choice. They sat behooded, side by side, row by row by the hundreds, and the effect was akin to performance art. Christo and Jeanne-Claude, the artists who wrap things in plastic and fabric, would have felt upstaged.

It seldom rains on Virginia's inaugurals, and the officially issued ponchos made people-watching on the inaugural platform — a major thrill of the occasion — a challenge. Since quadrennial inaugurals are equal parts pageant and governmental family reunion, those in choice bleacher seats get to watch the fascinating parade of political personalities past and present, and wonder about the pecking order of who sits where.

By 10 a.m., invited friends and supporters, many of whom had come to Williamsburg the day before, began arriving to claim one of the 4,000 choice seats.

"I think he's going to be a great governor," said Rupp, who was Richmond city attorney during Kaine's term as mayor. "He's one of the best public servants I've ever worked with. He's honest as can be. ... There's nothing phony about him."

Meanwhile, directly across the way on the inaugural platform, officials and members of the General Assembly apparently were in no hurry to leave the warmth of the reception area within the reconstructed capitol. At 11 a.m. the lone exception was Thomas Morris, former president of Emory & Henry College and the new secretary of education. He surveyed the crowd, checked his cell phone and basked in the moment.

A number of Richmonders took their seats on the inaugural stand. Stuart Siegel (of S&K Famous Brands), chairman of Kaine's inaugural committee, had a front row perch. James and Bobbie Ukrop made their way onto the platform. Raymond Boone, editor of the Richmond Free Press and nattily attired in black, was one of the few journalists at the epicenter. Viola Baskerville, the new secretary of administration, sauntered in.

At 11:20 Pat Robertson appeared on the platform and was ushered to his assigned seat in the farthest possible corner. Former City Manager Calvin Jamison appeared and chatted up everyone within reach.

Chuck Robb, former governor and U.S. senator, and his wife, Lynda Bird Johnson Robb, sat seven seats from the podium and crouched under their plastic wrap looking like leftovers awaiting the refrigerator. On the opposite side of the platform, former Attorney General Mary Sue Terry sat next to former Gov. James Gilmore and his wife, Roxane. Nearby were former Gov. Gerald Baliles and U.S. Sen. John Warner. All were buried, in various degrees, under plastic.

U.S. Senator George Allen and his wife, Susan, sat directly behind the Gilmores. The Allens were among the few folks on the platform to eschew the plastic wrap. And despite the constant rain they looked strikingly handsome and sensible. The senator wore a brown Austrialian-style cowboy hat.

Susan Allen was resplendent in a turquoise-colored ensemble with a dramatic, broad-rimmed hat.

Strangely, there were no top hats. Are they uncool? If ever there were a day for hats, this was it.

Gov. Mark Warner was introduced with his wife, Lisa Collis, for a final bow. Like Allen, there was no Saran wrap on this presidential aspirant either.

Then, The Moment: Kaine and his wife, Anne Holton, were introduced. They walked onto the stage with an extensive, extended tribe trailing behind. It included her father, former Gov. A. Linwood Holton and former Virginia first lady Jinks Holton. Kaine and his wife were not shrink-wrapped. A reddish, wool scarf encircled her neck.

Musical notes? The soloist singing the National Anthem gave a long rendition that fell somewhere between campy and torturous (considering the rain) with canned accompaniment of over-achieving harps, violins and trumpets. It also included extra verses that many in the audience couldn't remember having heard before.

"Doesn't she know this isn't 'American Idol'?" one spectator asked under his breath.

After the inaugural address, the Rev. Walter Sullivan, retired bishop of the Catholic Diocese of Richmond, offered the benediction.

At the parade that followed, a soaking-wet Kaine savored his first moments as the governor of a far-flung and prosperous state. S