Standing on the gallows in New Kent, Julius Christian, 21, and Patrick Smith, 20, couldn’t believe the group that had gathered to witness their hanging for robbery and murder. The crowd that day, March 25, 1879, was estimated to be 2,000 people.

In racist minstrel dialect, an article in the Richmond Dispatch quoted Smith: “Good Lord, look at de people,” it read. “Dey is settin’ up in de trees like turkey buzzards.”

Before the introduction of the electric chair, scenes like this were common at hangings in the South, though they rarely attracted so large a crowd. Given a platform for the first time in their lives, these prisoners, who were usually young and Black, could give speeches, sometimes lasting more than an hour. Attendees – also predominantly Black – would often chant and pray for the condemned. 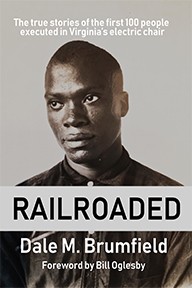 In his new book “Railroaded: The True Stories of the First 100 People Executed in Virginia’s Electric Chair,” Dale Brumfield explains that these large public gatherings made the white establishment uneasy, eventually leading Virginia to adopt the electric chair for its executions. Hangings, which took place publicly in the locality where the crime was committed, were replaced with private electrocutions in the basement of the Virginia State Penitentiary in 1908.

“Progressive reformers liked the idea of getting away from hanging, because sometimes the rope broke, sometimes the neck didn’t get broken and the prisoner hanged there and choked to death. That happened a lot: 10 or 15 minutes to die that way,” says Brumfield, field director for the organization Virginians for Alternatives to the Death Penalty. “The electric chair was also a victory for Jim Crow segregationists [who] saw it as a deterrent to crime, as well as doing away with congregations of Black people.”

A writer and anti-death penalty activist, Brumfield previously wrote histories of Richmond’s alternative publications and of the state penitentiary that once existed near Monroe Park. Through reading about Virginia’s early executions by electric chair, Brumfield said it became obvious that race, mental illness and class were major factors in unfair death penalty sentencing. People accused of crimes were often convicted on flimsy or nonexistent evidence and were routinely beaten and bullied into confessions.

“The criminal justice system was so screwed up,” Brumfield says. “They’re not monsters; they’re not evil geniuses. They were dirt poor, marginalized, mentally ill, most of them.”

According to Brumfield, these state-sponsored killings were a way to avoid lynchings where angry mobs would surround jails and attempt to take matters into their own hands. While Virginia legislators publicly decried lynching, Brumfield says they created a speedy execution system that was aimed at placating the public. Suspects were sometimes indicted, tried and sentenced within a day of a crime being committed, though by law they had to wait 30 days to execute. Many were executed on the 31st day.

“They were creating the atmosphere for a legal lynching,” Brumfield says. “The unspoken phrase was ‘We’ll do it for you.’”

Though Brumfield began working on the book before this year’s resurgence of the Black Lives Matter movement, he says “Railroaded” adds a historical context for the extrajudicial killing of people who are predominantly Black and male. Brumfield notes that Virginians given the death penalty have the shortest amount of time to appeal than in any other state: “That is a legacy of the Jim Crow era.”

Of Virginia’s first 100 executions by electric chair, 99 were men and 87 were Black. Even today, white on Black crimes rarely receive the death penalty. In a state that’s 19% Black, Virginia has executed 56 white people and 57 minorities since the death penalty was reinstated in 1982. In that same time, Brumfield says the race of the victim has played a significant role – if the victim is white, a convicted person is three times more likely to be put to death than if the victim were Black.

“That’s putting a value directly on human life based on race. That’s why it’s so wrong to continue this practice,” he says.

Presently, all of Virginia’s Democratic gubernatorial nominees for next year’s race have announced that they support ending the death penalty.

“There is no group of people in our society that is more maligned, misunderstood or forgotten than condemned criminals, those who have been executed,” Brumfield says. “This is a corrupt, bloated, racially biased system that is just a ragged remnant of Jim Crow that needs to go away.”