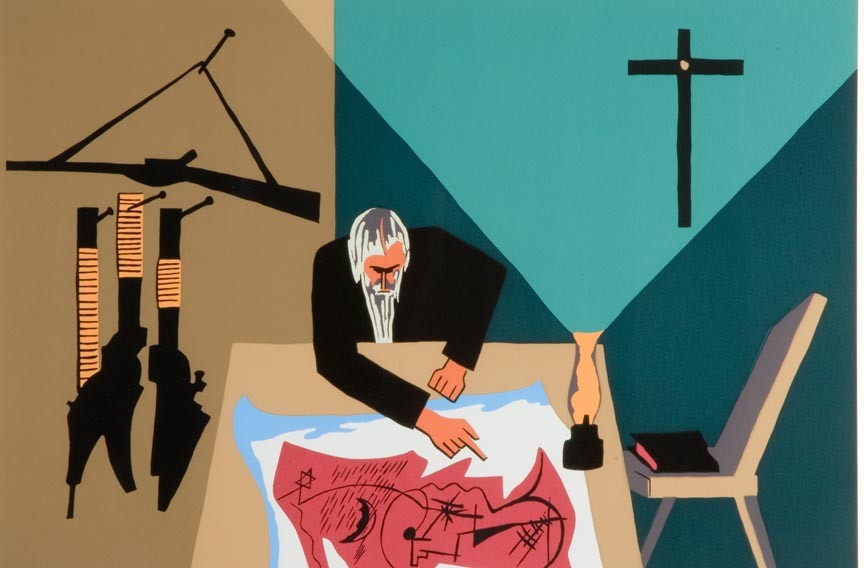 Jacob Lawrence broke barriers as the first black artist included in the Museum of Modern Art's permanent collection. Primarily a painter, Lawrence (1917-2000) became known for a unique figurative vision that was combined with then-unique subject matter: the lives of extraordinary African-Americans.

Lawrence grew up in Harlem during its heyday, experienced early success as an artist and lived a long life of art, teaching and humanitarianism. The Virginia Museum of Fine Arts recently acquired a series of silk-screen prints by the artist and rapidly has placed them on view. "The Legend of John Brown" includes 22 prints depicting the life of militant abolitionist John Brown, best known for leading an 1859 anti-slavery raid on Harper's Ferry, and his subsequent hanging for treason.

The allegorical prints feature Lawrence's signature graphic style with rich colors and simplified forms. His capacity to play with shape and intense emotion within a simplified but stylized composition inspires admiration. This particular series and the accompanying artist's text originally were seen as gouache paintings in 1946 at the Barnett Aden Gallery in Washington, among the first black-owned galleries in the country. The paintings eventually deteriorated too much for public visibility, so in 1977 Lawrence created limited-edition reproduction prints of the work.

"The Legend of John Brown" is one of many historical hero narratives revisited by Lawrence in the 1930s and '40s. He was a grand storyteller with an eye for the necessary details. In this case, Brown, a white man who believed himself ordained by God to abolish slavery in the United States, is depicted in various states of personal life and social action — both at peace and raging with violence — leading up to the insurrection at Harper's Ferry and finally his death. Interestingly, Brown was born in 1800, the same summer of the slave Gabriel massive but failed rebellion in Henrico County.

Brown is perceived differently throughout history, sometimes as a crazy religious dissident and other times as a visionary freedom activist, like today's burgeoning Occupy movement. The current movement geared toward social and political reform has revived Brown's name, and though opinion about his use of violence as a revolutionary tactic differs among participants, his spirit of personal liberty has been wholly embraced.

There's a methodical poignancy to print No. 22, the final image of the series, showing Brown hanging in a noose with the bright blue and cloud-white sky behind him. That's because, of course, the image of a lynched black man is seared in the mind's eye of American history. S

"Jacob Lawrence: The Legend of John Brown" is a free exhibition. It will be on view in the second floor Works on Paper Gallery of VMFA, 200 N. Boulevard, through June 10. For information, visit vmfa.state.va.us.