Exploring moral codes, the “Love and Radio” podcast offers some of the most emotionally complicated stories anywhere. 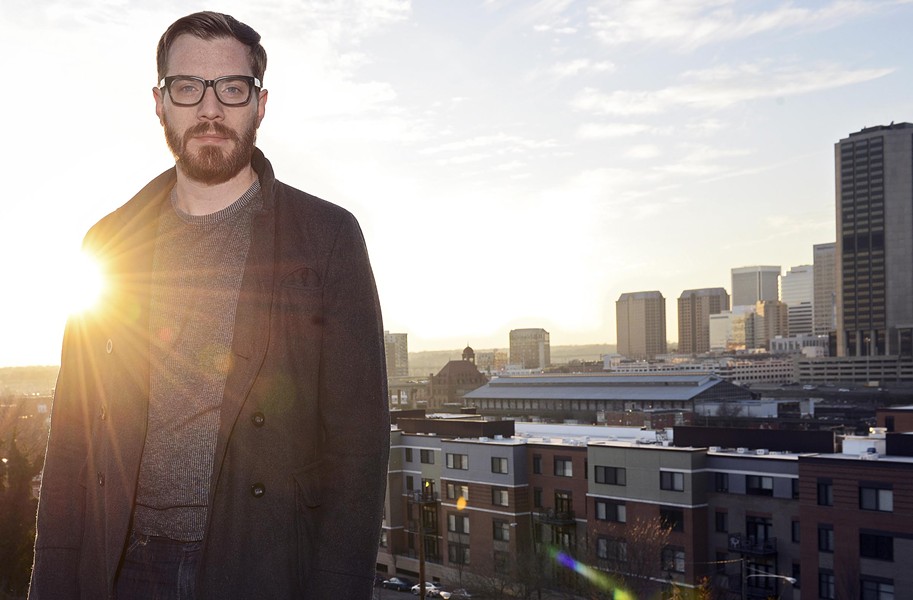 Ash Daniel With the massive success of “Serial,” podcasts are hotter than ever. Richmonder Nick van der Kolk, pictured near his former Church Hill home, is host of the thematic “Love and Radio” podcast. The show, which has aired on public radio in Oregon and Connecticut among other outlets, is considered by experts to be one of the best interview shows available — with brilliant sound design by Brendan Baker.

Sitting in the living room of a residential strip club, Nick van der Kolk suddenly found himself staring down the business end of a .38-caliber pistol.

The Richmond resident had come to Detroit to interview Jay Thunderbolt, a man who ran a 24-hour strip club out of his house. His subject stood 6-foot-5, and claimed to have killed 26 people during his time in the U.S. Army Special Forces. At age 11, Thunderbolt — real name Joel Suminski — was shot through the mouth, causing his face to permanently droop. Now, after many tequila shots, Thunderbolt’s .38 was two inches from van der Kolk’s face.

“Him pulling the gun on me made me feel even more safe than anything else that had happened up to that point, weirdly,” says van der Kolk, who interviewed Thunderbolt in 2011 for his popular podcast “Love and Radio.”

“It all happened so quickly,” he recalls, “and I was pretty wasted because we had been doing shots. … He immediately put [the gun] down, and right after that he got up to answer the phone or something like that.”

Brushes with the dark side are common for van der Kolk. “Love and Radio” operates in an underworld of blackmailers and phone-sex lines, pedophiles and white supremacists, attempted murderers and balloon-porn fetish models.

An episode usually focuses on a single person, intimately relating his or her story with little exposition or explanation. Occasionally fictional elements are woven into the story as a stylistic choice, a storytelling device. “My intention is not to deceive people,” he says. “I think that you can be both fictional and honest.”

The podcast has gotten critical raves from such listeners as Ira Glass of “This American Life” and novelist Rick Moody (“The Ice Storm”), who called it his favorite podcast.

It’s rare that van der Kolk or other interviewers interrupt a speaker, and episodes often conclude far from where they originated. The episode “Fix” begins with a man stealing promotional records from his company and cocaine from the mob. By the end of his tale, he’s lost a job as a city editor for The Los Angeles Times and erroneously reported that Karl Rove was indicted over the Valerie Plame affair.

Van der Kolk has directed and produced the podcast for 10 years with sound designer Brendan Baker. In choosing stories, he steers away from subjects that seem black and white.

“If I have a very strong reaction to something that’s very positive or negative, I tend not to pursue those stories,” he says. “I go for issues and people that I find morally complicated.”

One such story is “Jack and Ellen,” in which a young woman confesses to creating fake Internet profiles for minors in order to ensnare pedophiles. Termed “pedo baiting,” the woman then blackmails the predators for $500 gift cards.

“If she was someone who was unthinking and had no conflict about it and was a total sociopath, it would not have been an interesting story,” van der Kolk says. “I think she had to struggle to some degree or justify it in her own mind. That’s really interesting stuff.”

“Jack and Ellen” was one of a handful of stories “Love and Radio” has produced that originally were pitched to and rejected by “This American Life.”

“They want their main character to be entirely likable. I like everyone who’s on [my] show though too, so I don’t think that’s very fair,” van der Kolk says. “I don’t agree with everyone, but people are complicated.”

In “I, Sitting Beside Myself,” Mathias Rust explains how he landed a Cessna near the Kremlin in Moscow as a teenager. Flying from West Germany, Rust says he made the illegal trip to reduce political tensions during the Cold War. After spending time in a Soviet prison, Rust was returned to West Germany, where he nearly stabbed a woman to death for rejecting his romantic advances. Such conflicting messages of peace and violence struck a nerve with van der Kolk.

More than crazy individuals, van der Kolk says he’s interested in people who step outside of the rules. He brings up “The Silver Dollar” episode, in which a black musician befriends the national leader of the Ku Klux Klan. “He is totally violating the rules,” he says. “The rules say a black guy isn’t supposed to go anywhere near the KKK.”

Van der Kolk says that part of “Love and Radio’s” appeal is that it plays to the strengths of a podcast. By offering few interruptions from interviewers, listeners can feel as though the subjects are speaking to them directly. And because many people listen to podcasts with headphones, it creates a more intimate form of communication than radio.

“Typically when I’m micing people, I’m 6 inches from their mouth, so actually the physical distance between the speaker’s mouth and the listener’s ear is 6 inches,” he says. “It’s nuts if you think about that physical distance in reality. It’s like hugely violating someone’s personal space.”

“Love and Radio” also has received plaudits from Jad Abumrad of “Radiolab” and the Atlantic. And last week, Slate named the installment “Secrets” to a list of its 25 best podcasts. But not everyone has been a fan of the series.

Upon hearing that “Love and Radio” was going forward with the pedo-baiting episode, a journalism ethicist contacted van der Kolk to try to dissuade him from doing the story, saying it would ruin his career. Instead, the episode won an award.

Though van der Kolk offers little in the way of narration, like filmmaker Werner Herzog he’ll occasionally add fictional elements to a story to further a point. In a world where virtually anything can be stated as fact on the Internet, van der Kolk says that people should keep a healthy skepticism about all forms of media.

“I really trust my audience to be smart and trust their own opinions,” he says. “There’s some quote about Hunter S. Thompson — he wasn’t the most truthful but he was the most accurate.” S

“Love and Radio” is available for free download on iTunes, as well as loveandradio.org.