by Scott Bass and Chris Dovi 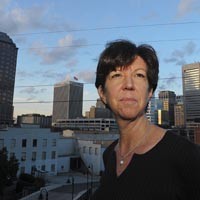 Her name was nowhere to be found in the official press release, but Mayor Dwight Jones' restructuring of the city's economic and community-development agencies last week had many people asking, What about Rachel Flynn?

The controversial director of community development was reassigned as part of the restructuring proposal — she'll become director of the renamed Department of Planning — but city officials say her duties will largely remain the same.

Except in one critical area, that is. Flynn no longer will be in charge of the community block grant program. For example, Flynn's office administers between $6 million and $9 million in federal community block grants, according to a review of the city's Consolidated Action Plan for Fiscal Year 2009-10.

That money largely pays for the Neighborhoods in Bloom program, which offers financial incentives to homeowners and developers to rehabilitate housing in typically depressed neighborhoods such as Carver, Blackwell and Bellemeade.

Under the proposal, the new umbrella agency, the Department of Economic and Community Development will administer the federal grants, attempting to leverage the money and redistribute it more efficiently, city officials say.

Exactly what that means, however, is unclear.

T.K. Somanath, president and chief executive of the Better Housing Coalition, says he plans to meet with the recently hired Peter Chapman, deputy chief administrative officer for economic and community development, to inquire about the future of the program.

“We just want to make sure that it continues, and the money that is earmarked for neighborhood revitalization [isn't funneled into] other downtown projects,” he says. “The Neighborhoods in Bloom program needs to have continuity.”

As for Flynn, she says she has no intention to leave. She'll remain in charge of “zoning, inspections, architectural and design issues,” according to the press release. Since Mayor Jones took office, there have been questions about Flynn's future, especially since a dustup in mid-April in which Flynn publicly refused to compromise with the developers and supporters of Echo Harbour, a planned condo development on the James. As part of the Downtown Master Plan, Flynn has pushed the city to purchase the property and turn it into parkland, upsetting developers and some City Council members, who have publicly called for Flynn's ouster.

Flynn's Echo Harbor stand solidified her pop-hero status among preservationists as the condo development threatens the view from Church Hill for which Richmond was named. Some people view the restructuring as an attempt to strip Flynn of her powers, which an administration official says is inaccurate.