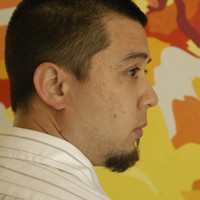 Some people complain about the lack of arts support for young people in Richmond. Other people do something about it. Case in point: Two VCU art school pals, Jeremy Parker and R. Anthony Harris.

Having grown up in small-town Danville, the son of a Baptist preacher, Parker always felt stunted in his conservative, rural hometown. After moving to Richmond to get an art degree from VCU, he fell in love with the local arts scene. But he noticed that while there were many small enclaves of creative types, nobody was forging much of a synthesis. So he joined forces with Harris, who was busy financing and drumming up support for the art-focused RVA magazine. Parker also began working with Gallery5, which opened at the same time.

Parker's an energetic talker, and his skill lies in his enthusiasm and ability to mobilize people. He's an eternal optimist, a professed "big advocate for self-empowerment" who would rather put on an art show in someone's cozy home than sit around complaining about what the city lacks. He says his goal with Gallery5 was to make art shows fun again by mixing things up, adding DJs and fire performers while making the setting comfortable for everyone. "Five years ago, First Fridays was pretty elitist," Parker says. "That's all changed."

Harris is similarly persistent in his vision. When growing up, he got a sense of what it was like to sacrifice for a small business. His mother owned a women's boutique and tanning salon, and when she was sick, her teenage son would cover for her, selling beauty products to women.

When Harris entered the local job market, he could never quite find an outlet for his own creative juices as a graphic designer. So he invested his savings in RVA magazine to showcase local artists and feature short fiction, music writing and culture stories. It's now a free monthly, and as its advertising has improved, it's begun paying staff. "My main goal was I didn't want talented artists I knew to keep leaving Richmond," Harris says.

The two saw huge success with last year's New Year's Eve celebration in Carytown, sponsored by RVA. With local merchants supporting the event, Harris says he's in talks with the city to lend support -- and his new budget is 10 times larger.

"I was really humbled that night when the ball dropped," Harris says. "I looked around and saw old white people, old black people, college kids, families — everyone you can imagine, smiling and celebrating together. It was something special."