Sarah Choi One of the latest iterations of the Silent Reading Party was held at Brunch, a restaurant in the Fan that’s usually lively and bustling.

Sarah Choi sits in the back of Chairlift at Brenner Pass, sipping on a can of Waterloo sparkling water. She overlaps her two phones — one for client accounts and the other for personal use — and sets them atop her "Don't Be a B*tch, Be an Alpha" journal, an ode to her sister's upcoming book.

Choi looks down at two raspberry macarons resting on a tinted plate and delicately arranges them to capture the scene for her Instagram story.

"What's your Instagram?" she asks
cheerfully. "I want to tag you."

She's effortless in her knack for networking and making people feel at ease. It's how she established Silent Reading Party, a two-hour event that combines drinking and literature at a local restaurant once a month.

Silence is central to the experience, which requires a ticket but remains free. Although anyone can read at home alone, she says it's easy to be distracted.

"I think our life is currently really bombarded with technology," she says, the irony of that coming from a woman who runs more than six social media accounts not lost on her. "I think it's nice to be intentionally quiet. … It's a weird way of connecting with people."

Inspired by what she saw happening in New York and Portland, Oregon, Choi felt the idea could thrive in Richmond. 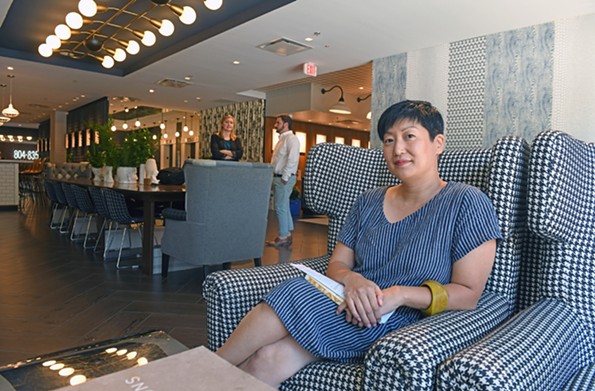 In less than six months, the email list has grown to more than 600 people, which makes Choi's face scrunch slightly.

"I'd love to be able to provide the experience for at least 10 percent of the list," she says, attributing that to the people pleaser in her. "But looking for a space for 60 people in Richmond is a little bit of a challenge. There are a lot of people who get very disappointed if they don't get a ticket."

She chuckles as she says this, noting that even when she posts the tickets at 5 a.m. — her prime time for personal projects — they sell out in minutes. She now gives a day's notice.
Before each Silent Reading Party, Choi prints instructions that mimic sushi menus and allow participants to check off the libations they're craving. She hands them to guests with an index finger pressed to her lips, indicating silence. The menu varies with each location

During the two-hour event, the business shuts down the kitchen and is closed to the public. One of its most recent locations was Brunch.

"Getting to enjoy the space in a quiet way was especially fun for us. We're used to that place being loud and exciting," says Shannon Conway, director of operations at Brunch. "We all got a real big kick out of it."

Elizabeth Nemacheck, a recent Silent Reading Party participant and self-proclaimed extroverted introvert, notes that opportunities to be quiet in public are rare.

"So it's interesting to see how you have to interact differently," she says. "Like I want water, so I need to put it on my piece of paper because I can't say it."

A John Steinbeck enthusiast, Choi sometimes sits back to admire what others are reading. Michelle Obama's "Becoming" remains a fan favorite.

"I'm not talking to them for two hours but I feel like they are now somebody I've met," Choi says. "I feel like we have shared interests — we have a love of reading, a love of quiet time. The more people come, I feel like these are people I know."

To learn more and find out when the next round of tickets will be available, follow @silentreadingpartyrva on Instagram and Silent Reading Party Richmond on Facebook.