In families of their own creation, drag performers find ties that bind. 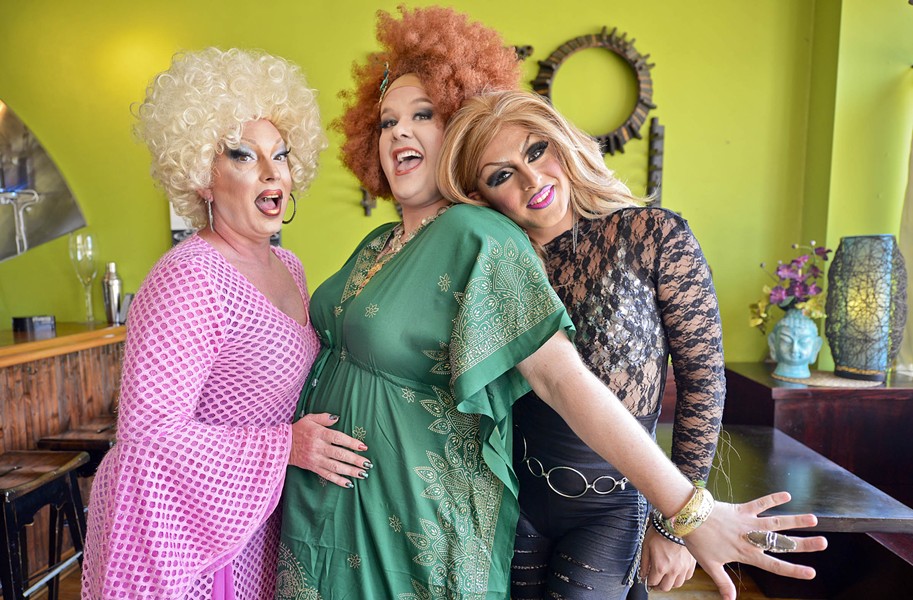 Bunny, Spaulding, Monroe, Devereaux — ever wonder why so many drag performers share similar last names? Those are the grand and glittery branches of a family tree, folks.

Unbeknownst to the throngs of adoring bachelorettes, Red Hat Ladies and other rowdy brunchers, these 6-foot bedazzled entertainers have family ties that bind as tightly as the accoutrements that keep their parts in place during shows.

"Most drag queens you talk to have a drag mother," says Richmond's Southern-fried sweetheart, Magnolia Jackson Pickett Burnside — "someone who learned 'em."

It's rooted in acceptance, support and encouragement. Children who were gay or drawn to the drag community could face rejection by their families, but could seek refuge in communal spaces or drag houses.

"Some old queen would take in all these little drag children to show them the way," Burnside says. "A drag mother takes care of her kids like any mother. She helps them pay for stuff — new tits, new noses, whatever. In return, they take her last name."

As renowned drag queen RuPaul said, "As gay people we get to choose our own family."

Richmond has a vibrant history of drag families dating at least as far back as 1960, some composed of both male and female performers. Against the backdrop of such bars as Godfrey's and Babes of Carytown, which double as second homes and performance spaces, drag families have evolved. Some remain traditional and others atypical, all with a smidgen of dysfunction.

"Traditional drag families do still exist," says Heaven-Leigh Kennedy. The Godfrey's performer says that families from the late '70 and '80s are still together, and some are still performing.

"Just recently a few from the 'older generation' have made a comeback and have been welcomed with open arms," Kennedy says. "Christie Parkins — she's my 'aunt,' so to speak, and more like a sister. I'm so proud of her for coming back to the stage and showing Richmond what the past was about."

Kennedy says that while some next-generation entertainers are straying from the model of taking on a drag mother's last name for the sake of creativity and expression, they still value the family construct. "They look up to our families and hold them in high regard," she says. "They want to create a family just like ours and want to be a legend as we have become."

Michelle Livigne CuzimEdgy, recently voted Richmond's Best Drag Queen in Style's Best of Richmond reader poll, embraces old and new drag traditions. She was given her name by the then-boyfriend of her drag mother, Tiffany Devereaux, whom she met at Godfrey's Wednesday Night Hump Night.

"Tiffany was the hostess and I was 18, dancing the night away," she recalls. Friends encouraged Livigne to strut her stuff at an amateur night, and eventually she became a cast performer at Godfrey's, where she's been for six years.

She's also reared five drag kids of her own. "I would do anything for them," she says. "But the first thing you have to teach them is how to glue down eyebrows."

Developing concepts into performance and sewing costumes also are this matriarch's duties. What Livigne stresses is that a drag family is just like any other family. "They're the people that will be there for you," she says. "They're also the people that you argue with and there's rivalry."

But Candy Pantz suggests that drag families don't get too caught up in competition. "At the beginning and the end of the day, we are men in dresses," she says. "It's meant to be fun and funny."

Pantz and Burnside are Richmond's most atypical drag family. Each came up with her own drag name, and they have no offspring. Pantz was a drag orphan of sorts and Burnside claims a biological woman as her drag mother — burlesque performer Dolli Holiday, who encouraged Burnside's first drag performance as host of Richmond Varietease.

Pantz and Burnside first met at Esta Bunny's Drag Race series at Nations. And like an asylum-worthy Lucy and Ethel, say they rarely perform separately because they depend on each other for everything from booking gigs and stitching costumes to removing each other's heels after one too many bourbons.

"Backstage, we'll tell each other when we look like hammered shit," Burnside says.

"Bitch, your lips are crooked and you've got tits on your back. Fix that," Pantz adds.

Sometimes, you have to rely on family for the cold, hard truth.

But the duo's tough-love bond is as strong as their drag philosophy. "We couldn't care less about the crowns, titles and money," Burnside says. "We've avoided a lot of drama that way."

Or as Pantz puts it, "We are the ones that put FU in fun!"