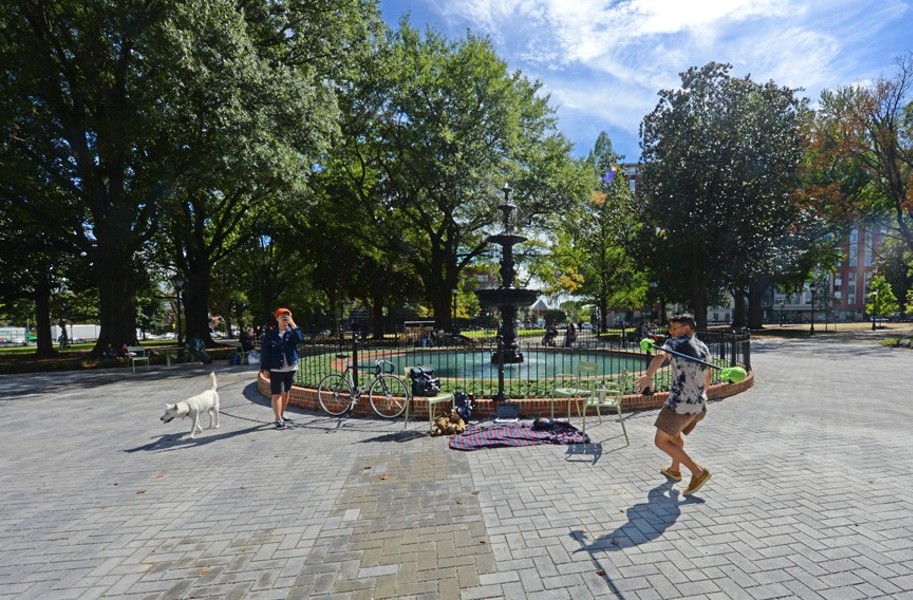 There’s a lot to love about the newly reopened Monroe Park -- who can be mad at a brightly painted piano available for playing?

But organizations and neighborhood associations around town have their beef with how the city handled the park’s makeover. We sent some questions to Ben Weiner, communication director for a Virginia chapter of the Sierra Club, which has been one of the most vocal critics particularly of the Monroe Park Conservancy, to hear their side of the story.

Style Weekly: Monroe Park obviously has a long history in Richmond. When they decided years ago to renovate, what were you hoping for?

Unfortunately, the City Council signed a long-term lease with the Monroe Park Conservancy who took over the leadership of the park. The Conservancy had little neighborhood representation, and discarded much of the Monroe Park Master Plan. Against the protests of the Sierra Club and Oregon Hill representatives, the Conservancy led a concerted effort to remove over 40 mature trees from the park without the proper City approvals. Not only was the goal flawed, the process to force-complete it was flawed.

How would you describe the Sierra Club's role/involvement during the renovation process?

The Sierra Club Falls of the James was very angry that our request for a meeting with the mayor on this subject was ignored, along with the rest of the letter. The Sierra Club took a strong stand against healthy, mature magnolia and maple trees being removed from Monroe Park to make way for tent rental space. Shamefully, these trees were destroyed anyway to make way for temporary tent space.

What were your concerns going into the renovation process?

One of the Sierra Club Falls of the James’ main reasons for getting involved when it did was because it saw how the public was being treated. Even though Councilman Parker Agelasto successfully sponsored a resolution that required the Conservancy broaden its membership to be more inclusive of neighborhood and environmental groups, the Conservancy board remains with little neighborhood representation. The Conservancy's board is weighted heavily with VCU executives. The Conservancy opened a new board seat recently, and, instead of adding a neighborhood representative, an executive of Dominion Corporation was added to the board. Soon after a Dominion representative was added, the Conservancy proposed adding a lighted sign with the Dominion logo at a prominent entrance to the park. This sign was rejected by the Planning Commission and Urban Design Committee thanks to many outraged letters from the public. Unfortunately, this lit billboard one of the only issues with the Monroe Park renovations where the public has felt like they had any impact whatsoever.

Do you feel like your concerns, and those of other organizations and residents, were heard?

We believe our concerns were heard or read but appear to have been ignored and/or disregarded. We cannot speak for other organizations, but this process severely lacked in community involvement.

How would you describe the environmental impact of the renovation?

When the park was reopened it was apparent that the park has lost much of its valuable tree canopy. What was once a city environmental oasis is now an environmental disaster. VCU's goal in the 1990s of removing many of the trees from the park was finally implemented by the Conservancy. A lot of the charm and publically available amenities that existed in the original master plan have been done away with, including a children’s area and public restrooms. Monroe Park no longer feels like a public park.

The Sierra Club needs to protect remaining trees in all of Richmond's parks, including Monroe Park. While it will take a generation to recover the tree canopy of the destroyed mature trees, the Sierra Club must push for the tree coverage to be restored in Monroe Park. Because if its poor stewardship of the environmental resources of the park, the Conservancy's lease of the park should be rescinded by City Council.

Were you surprised by what you saw when the park reopened?

We urge anyone and everyone curious to read and consider the Sierra Club’s letters and statements, which documented many of the problems with the Monroe Park renovations. These were shared upon release with a local media that largely ignored them. There is no excuse for what has happened. We are very concerned that if things are allowed to stand, other public parks may face similar disasters in the future.