With the last print issue of a student newspaper, a 100-year-old ritual ends at the University of Richmond. 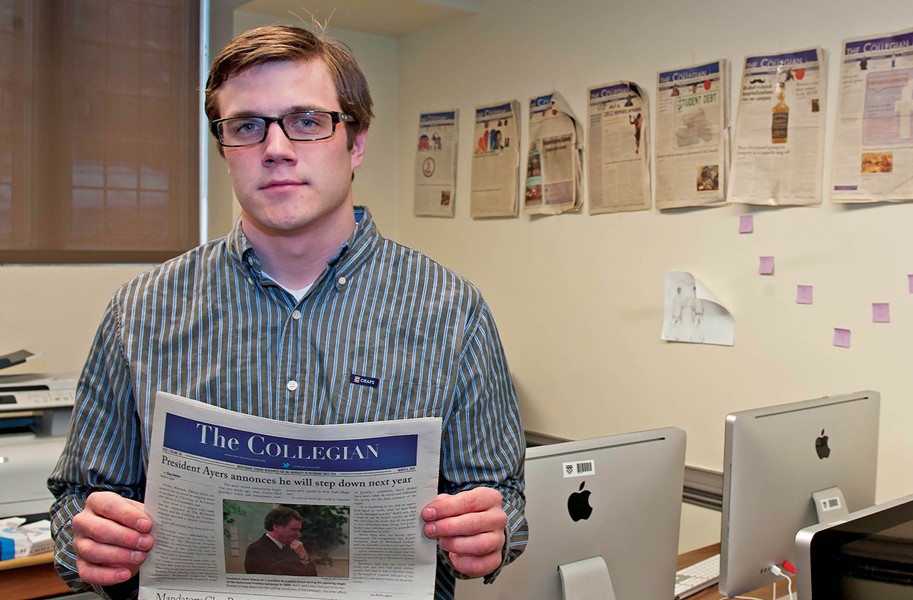 Scott Elmquist Editor in Chief Clay Helms holds the last print edition of The Collegian, which turns 100 this year. “We’re going to re-establish our name on campus,” he says of the newspaper’s transition to an online-only publication.

Everything starts getting weird after 3 a.m.

That's deadline wisdom from Clay Helms, editor of the University of Richmond's student newspaper, The Collegian, as he leads a new staff through its first and last print edition. Actually, he started getting weird around 2 a.m., when he let out his first yawn of the night and began pacing around the paper's basement office with a nightstick.

"It's a long story," copy editor Rebecca Fradkin says of the implement, before looking back down at a page proof.

So, too, is the Collegian, which has published for 100 years. With a circulation of 1,400, it operates independently of the university. But after about a year of mulling over costs and efficiencies, the decision came to cease its print version. And so the future journalists of America begin working on an online-only news source this month.

"This is the best way to move forward," departing Editor in Chief Marina Askari says. "A lot of newsrooms are making this transition."

Andrew Miller, dressed in a red tie and black suit, wanders in from a fraternity event a little before 1 a.m. As the paper's managing operations editor, he's eager to explain why newspaper deadlines are one college ritual that shouldn't, and won't, survive the night. One big reason is that the paper is around $30,000 in debt to the school. More important, he says, is that staff members will have the opportunity to break stories and tell them in ways that go beyond column inches.

For these students, killing the print publication makes sense. The biggest hurdle, they say, is the energy spent on a format whose usefulness seems ancient in the era of Twitter. This final edition features President Ed Ayers' retirement announcement above the fold. The story broke nearly a week ago, and it's news everyone knows.

"Things get dated so quickly," features editor Victor Nichols says. "You don't even think in days anymore, you think in hours."

There still will be Sunday meetings to determine who will cover what each week. But the students say the work mostly will occur on separate schedules, on their own time. A few editors are wistful about the lost camaraderie that deadline stress brings.
"It's pretty surreal right now," Miller says, before playfully tossing a soda bottle at Fradkin.

Dan Petty, digital director of sports at The Denver Post, helped build the current version of the Collegian website in 2008. His career has focused on bringing digital skills to a 20th-century institution. But he still sees the value in the late-night ritual of the college newspaper deadline.

"It built cohesiveness," Petty says. "It's one of the biggest reasons I'm still in the industry. Goodness knows I would've liked more sleep, but there was something in being in that experience together. With this transition, I think there will be something lost in that."

Faculty adviser Michael Spear stops by early in the night, bringing by one last bag of candy to tide the staff through. He supports the decision to stop printing, noting that he checks The New York Times website throughout the day.

Spear says a career like Petty's shows how much the industry has changed since he graduated college decades ago.

Prospects for these staffers are comparatively grim. But even in the early morning hours, no one is cynical about the profession.

"I kind of fell in love with the idea that everyone has a story to tell," Erin Flynn, content managing editor, says of her decision to pursue journalism. "I love it. I'm never worried about not making money. This makes me happy."

There's little mention of the Collegian's last issue in the issue itself, which the staff finishes a little after 3 a.m. Former editor Askari and new opinion editor Stephanie Manley acknowledge the transition in the Op/Ed section, as does former opinion editor Ben Panko. He notes both a sense of loss and a belief that going online simply is the right way to go.

"The Collegian is turning 100," he concludes, "and it's not going anywhere."