Put the Glasses On

A list of political horror films for the election season. 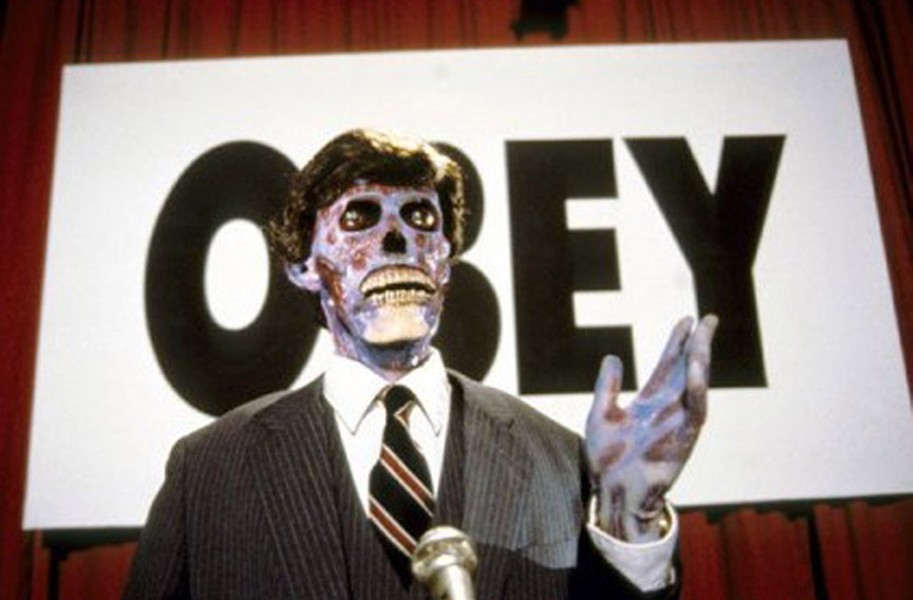 The last two years of the ignorant, ferociously corrupt Trump regime have felt like 25, and it's a challenge not to become deadened by the endless barrage of potentially apocalyptic news. Halloween offers a brief reprieve from the political climate.

Presently, we look for something, anything, other than politics to occupy our minds. Yet no genre speaks to the political climate as profoundly as the horror film, which abounds in brutal, simultaneously blunt and subtle symbolism that can cut through platitudes to the heart of our fears, resentments and insecurities.

With the upcoming election in mind, I've assembled a small Halloween film festival that offers shocks as well as startling parallels to various contemporary crises.

"Night of the Living Dead" (1968)
When it was first released, this was disparaged as pulp junk, until a long theatrical run prompted critics to discern the film's astonishing understanding of the tensions wrought by the civil rights movements. The first modern zombie film is also a story of an African-American man, Ben (Duane Jones), who's stuck in a farmhouse with a dysfunctional assortment of squabbling, venal white folks. The zombies — generally elderly, all pointedly white — ravage the farmhouse, an attack that Ben survives before he's unceremoniously killed by a white sheriff who may or may not assume that he's a member of the undead. George Romero's grimy, gritty images remain vital, suggesting both an expressionistic and docu-dramatic portrait of a class war that's finally reached an irreversible boiling point.

"The Texas Chain Saw Massacre" (1973)
A gorgeous restoration recently played at the Byrd and it was beautiful and ghastly, funny as well as nihilistic and weirdly empathetic. Ghostly, dynamic Western images are countered by a soundtrack that often suggests metal grinding against metal — or bone, and by intimate set design that illustrates a detonation of the American pastoral myth. The narrative also stings, detailing a family that, disenfranchised by the corporate downsizing of the meat industry, goes about rechanneling its dwarfed violent energies on a group of implicitly countercultural tourists who happen to be passing by. Like "Night of the Living Dead," this film shows that our political tensions are essentially circular: "The Texas Chain Saw Massacre" could easily be mistaken for a parable of how Trumpers ascended from the recesses of America's id to let their presence be fatally and, ultimately, impotently known.

"They Live" (1988)
Of course, John Carpenter directed the ultimate Halloween movie —"Halloween," duh, which is playing at the Byrd on Halloween night — but that's a little on the nose for our purposes. For a political horror film marathon, "They Live" is more apropos and revealing of the punk, tough-guy sensibilities driving Carpenter's work. In the film, Carpenter likens capitalism to the ultimate alien invasion, which is a more insidious means of control than laser guns and explosions. A drifter, resonantly named Nada (Roddy Piper), discovers sunglasses that allow him to see the gaunt monsters that are hiding under the skins of the sort of prosperous business warriors who have been lampooned by Bret Easton Ellis and Oliver Stone. This satire of Reagan-era deregulation, which has been expanded by the Trump regime, is among Carpenter's messiest and most exhilaratingly vulgar films, and the casting of Piper is a brilliant touch. An ex-wrestler, associated with a very right-wing entertainment industry, becomes a symbol of the working class's long-overdue awakening.

"The World's End" (2013)
The fear driving this list is expressed succinctly in this film's title, the last and best of Edgar Wright's Three Flavours Cornetto Trilogy. Ideally pairing with "They Live," "The World's End" follows an uneasily reunited group of childhood friends who return to their hometown to discover that all their bars have been rendered the same via corporate franchising. Said franchising extends to humans themselves, who have been turned into efficient, unquestioning robots by an intergalactic entity. But Wright doesn't merely hit the sort of anti-complacency notes that one might expect of a narrative that's so reminiscent of "Invasion of the Body Snatchers." The filmmaker also examines the stunted emotions that are channeled by nostalgia. The protagonist, played by Wright's frequent collaborator, Simon Pegg, in the performance of a lifetime, is a self-absorbed failure who's addicted to the past, and so the alien invasion ironically empowers him by conforming to his pop culture-addled imagination. This man is a fan boy who's finally allowed to enter his daydreams and write off his increasingly bleak reality.

"Da Sweet Blood of Jesus" (2014)
This egregiously underseen Spike Lee remake of Bill Gunn's cult classic, "Ganja and Hess," updates its story of African-American complacency for the 21st century. Gunn's film is a work of raw gutter art, which is vibrant yet lacking in the posh excess that's necessary to the realization of the notion of selling out. An exacting formalist, Lee creates a play land in Martha's Vineyard that testifies to the joys of rarefied privilege, which is easy to decry in theory yet much harder to resist in reality. And the filmmaker isn't hypocritical: He drinks in the art, the booze, the vistas and the fabulous sex that money can buy. Vampirism here is an act of bringing one home, of reconnecting with roots, or is it the opposite, the inevitable literalizing of financial parasitism? Lee has it both ways, refusing to resolve his riddles, while fashioning a hilarious, erotic, tawdry, poetically violent exploration of the hunger that begets cultural alienation. S