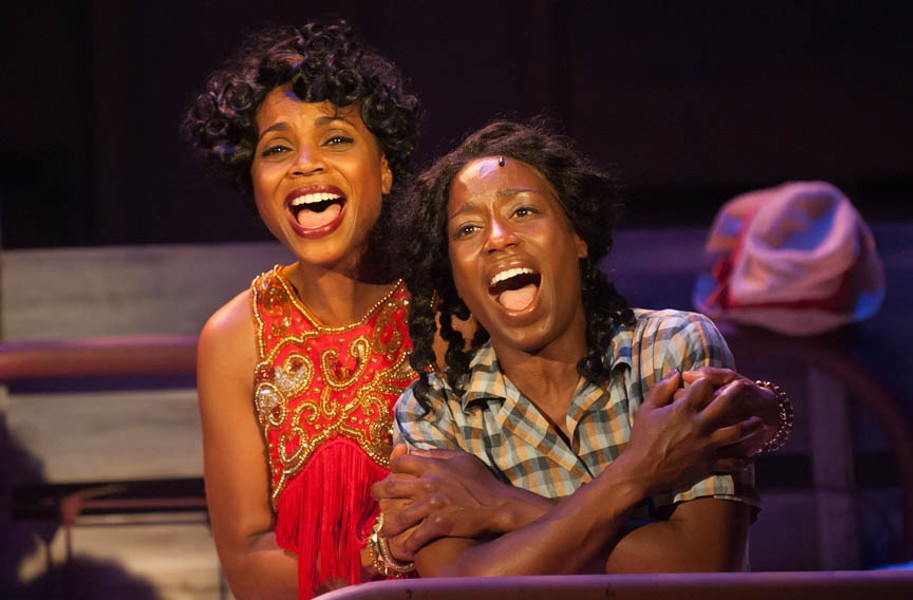 Aaron Sutten Walk-on newcomer Carolyn Minor-Daughtry, as Shug, and Felicia Curry, as Celie, do exceptional work bringing Alice Walker’s famous book to life in one of the year’s most satisfying local musicals.

Late in the dazzling, moving and altogether exceptional musical "The Color Purple," the character Celie sings two simple words that make the opening-night audience practically burst with cheers of support, joy and pride. A show that engenders that kind of overwhelming empathy for its characters clearly is a triumph.

But such rapturous audience reaction is only one reason to rush out to see this show before it closes at Virginia Repertory Theatre. Another is the sheer volume of resources that clearly have been poured into this production, including a huge cast of more than 30 notable performers, a lively orchestra under Ben Miller's assured musical direction and the sumptuous set, lighting and costume design work — by Ron Keller, Joe Doran and Sue Griffin, respectively. If there was any doubt that local companies can turn out Broadway-caliber work, this production should put those doubts to rest with some finality.

If you're familiar with Alice Walker's Pulitzer Prize-winning novel or the popular movie adaptation, you know the outline of the story. Celie (played by Felicia Curry) grows up in rural Georgia in the early 1900s. She's twice impregnated by her father before the age of 14, and given over to an abusive local farmer known only as Mister (Jerold Solomon). He separates her from her one joy, her sister Nettie (Katrinah Carol Lewis). Her hard life starts to change only with the arrival of Mister's mistress, the glamorous nightclub singer Shug Avery (Carolyn Minor-Daughtry).

It's a dense story, and a minor quibble with the show is the way it speeds through so much plot and background in its first few moments. But that strategy pays off in the long run. With such a rich foundation, later scenes involving supporting characters such as Mister's son Harpo (Josh Marin) and Harpo's wife, Sophia (Desiree Roots Centeio), are that much more rewarding.

The telescoping of Celie's early life also gives the show space to include crowd-pleasing numbers that invoke Celie's whole town and, in a scene showcasing choreographer Leslie Owens-Harrington's contributions, an elaborately costumed African village. Director Chase Kniffen always has had a particular skill at shepherding large musicals, making each cast member seem purposeful, and that skill serves him extremely well in these scenes. The recurring appearance of a trio of church lady busybodies (Stephanie M. Hill, Amanda Montague, and Shalimar Hickman Fields) is particularly amusing.

The diminutive Curry seems to wear her heart on her sleeve in the lead role, effectively navigating Celie's complex emotional landscape. She's surrounded by fine performances too abundant to adequately describe them all. Stage veteran Centeio reaches a new level of distinction with her galvanizing portrayal of Sophia, who shows Celie how a woman can stand up for herself. In a cast where every voice shines, Daughtry's is just one more step up, near-staggering in its expressive power.

Effusive adjectives can get thrown around casually when describing theatrical productions in town — heaven knows I've been guilty of the practice. But Virginia Rep's "The Color Purple" truly is a show that sets a new standard for excellence. It's theater at its best. S