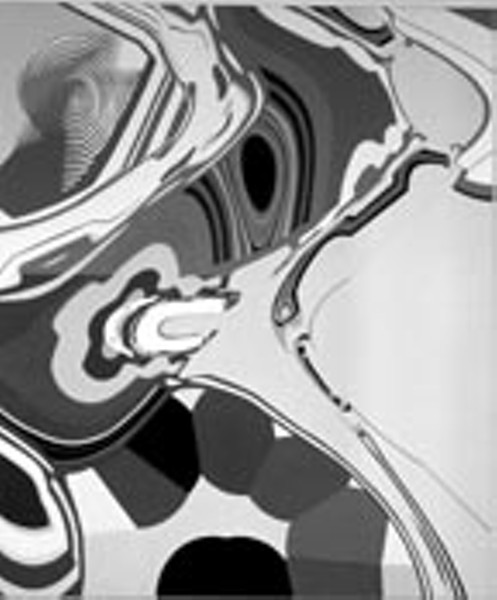 In a statement for a show at the Reynolds Gallery, painter Shirley Kaneda writes, "I am working toward painting as models of how spatial relations among incompatible visual ideas can be reconciled as parts of a painting which displays a larger compatibility."

Kaneda's position seems lofty when expressed in words, but in paint, it is less so. Standing before her paintings, viewers will likely get it on their own.

Kaneda catalogs what paint can do by playfully sampling multiple techniques and effects on white fields. On each canvas she renders a variety of shapes as hard-edged, feathered, linear, geometric and biomorphic. Her candy-colored paint is sometimes marbled or spiraled in decorative passages and juxtaposed against flat shapes or primitively applied lines.

By painting such a smorgasbord of imagery, Kaneda, who has been heavily represented internationally in one-person and group shows since the late '80s, seems to be simply painting about paint, while disregarding the viewer's need to identify with what's going on.

But unlike painters of the '80s like Eric Fischl and David Salle whose clashing imagery and hardened painting style were loosely labeled "bad painting," Kaneda doesn't ignore formal convention completely. Her disparate images form a rhythm that is visually agreeable, if not exactly logical. Her weaving of color and pattern against pristine white always results in dynamic compositions.

In "Stable Uncertainty," the artist paints incongruous shapes as if forming an open mouth swallowing the white background. By locking the white in a powerful position, Kaneda challenges the viewer to see the white as both positive and negative space and therefore unifies an otherwise fragmented whole.

As titles like "Stable Uncertainty," "Cold Heat" and "Smooth Abrasion" suggest, Kaneda caters to duality, difference and opposition. In her hands, the language doesn't refer to the negative but to the positive. Despite local discordance, there exists a harmony in the big picture that is evident whether you read the rhetoric or not. S