“Extract” has a taste for suburban satire but suffers from a diluted story. 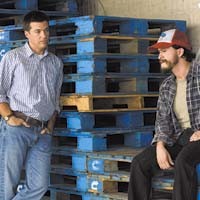 When it comes to wringing the essence of everyday America, Mike Judge has hands of steel. As in “Office Space” from a decade ago, the strip-mall restaurants, suburban homes and work places in “Extract” — about a factory owner (Jason Bateman) burdened by the stupidity of his fellow humans — are so authentic they could be taken for satire or simply as a mirror of reality. Judge can reveal most of the known universe in an Applebee's; anyone who's ever been to one will certainly recognize everything in the movie.

“Extract” follows Joel (Bateman), who owns a mom-and-pop version of Sauer's that makes various flavor extracts following chemical formulas he developed in college. Joel is a financial success, but he has many problems, including a bored wife (Kristen Wiig) who rarely sleeps with him, and a dim-witted employee, Step (Clifton Collins Jr.), who loses a testicle in a freak accident at the plant. Unscrupulous kleptomaniac Cindy (Mila Kunis) takes a job there to get closer to Step and his injury settlement, and Joel, acting on the advice from his dopey best bud, Dean (Ben Affleck), hires a gigolo (Dustin Milligan) to seduce his wife in the hopes of clearing his conscience to have an affair with Cindy.

Yes, all these developments are as jumbled as they are implausible, but Judge doesn't seem to mind. To him a plot is merely a cabinet to display his intricately detailed creations. Some of them seem so broadly comic and yet familiar you'd guess Judge is still living among them despite his success with such shows as “King of the Hill.”

There's Joel's unbelievably annoying neighbor (David Koechner), blissfully immune to Joel's attempts to evade or dislodge from him, still shouting “Oh, one more thing” under the automatic garage door as it closes. (We see him hurdle a fence later to catch up with Joel's BMW.)

Joel's employees vary from the shrill, gossipy, frumpishly dressed Mary (Beth Grant) to the metal-head forklift operator (T.J. Miller) who wants a piece of an impending sale of the company, because, he says, he's “been working here, like, two years.” Different ages and clothes but the same IQs underneath.

Step spends his nonworking hours on a worn beige couch with his cousin Phil (Brent Briscoe) watching hunting and fishing programs on a big-screen TV. That would be enough of a sketch for most comedies, but Judge likes to revisit his characters until their quirks hammer us as they must Joel. Repeatedly he returns to this pair — perhaps the movie's aged Beavis and Butt-Head — if only to riff on their lifestyle. At one point Phil, who realizes as he drains the last of the Pepsi that Cindy has driven off with the only transportation, defiantly declares he will get Domino's to deliver more. They answer his call by name.

Judge has created another gratifying world in which the ignorant and cowardly thrive while the rest of us are driven crazy by them, but one with a story that phases in and out before fizzling with no compelling climax or conclusion.

Tellingly, Joel's business hardly factors. Maybe all those vials are supposed to exist with metaphorical punch, but “Extract” lacks the rebellious flavor of “Office Space,” a picaresque with a hero trying to escape his soul-crushing job.

Joel isn't an oppressed employee; he's the rich employer. He still hangs out among the ketchup bottles and Sweet'n Low packets at the exit-ramp-hotel restaurant with Dean, but he has little motivation other than to long for the next distraction. “Extract” is in a similar predicament. (R) 90 min. HHHII S