Incendiary Canadian band Fucked Up reconnects with its roots and surveys time. 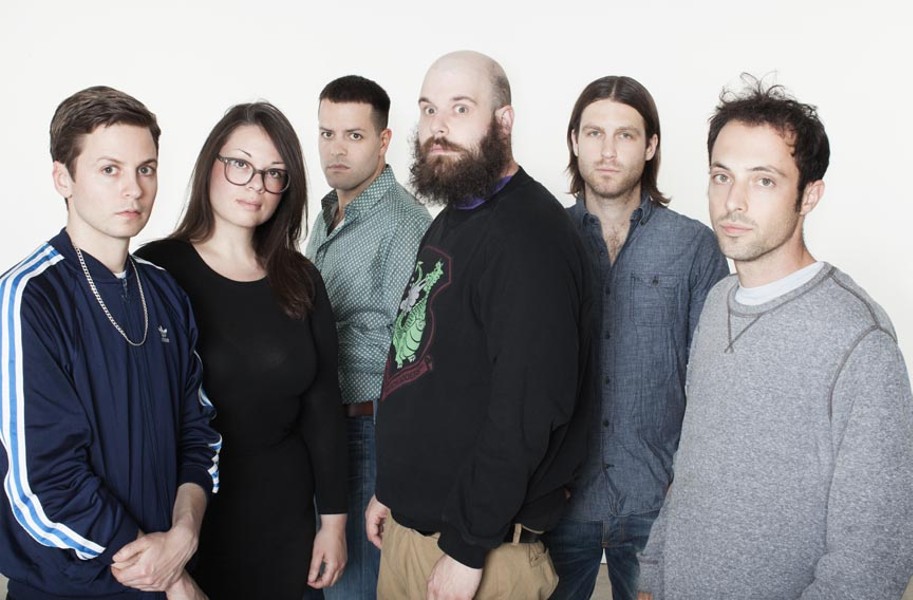 Dustin Rabin Vocalist Damian Abraham, center, and guitarist Mike Haliechuk, right of him, learned a lot about each other during the making of Fucked Up’s fourth album, “Glass Boys.”

Glass Boys," the fourth studio full-length by boundary-pushing Canadian punk band Fucked Up, debuted at No. 84 on the Billboard 200. That's relatively remarkable considering the band's aggressive and incendiary music, but equally so given that most mainstream publications won't print the band's name.

The New York Times has extensively covered the band, and praised it effusively, but refuses to print even a bowdlerized version of the band's name; its most recent article refers to Fucked Up only as "the Canadian band led by Damian Abraham" whose name "includes an obscenity."

"I thought we would be more of a hindrance to our own success than that name is," Abraham says by email while his band tours Europe. "Everything beyond the first two shows I filled in for Josh [Zucker, still one of the band's three guitarists] on vocals for has felt like a lucky break. I wouldn't change a thing. It does suck telling the kids at my son's school what I do for living, though."

Fucked Up certainly has received plenty of breaks since signing with Matador Records, a prestigious indie-rock label with major-label distribution, in 2008. That year, Matador released the group's "Chemistry of Common Life," a 52-minute masterstroke about the mysteries of birth, death and the origins of life. The album won the prestigious Polaris Music Prize, Canada's equivalent to England's Mercury Prize, in 2009. The band's follow-up, "David Comes to Life," also received a Polaris nomination, and Spin named the record best album of 2011.

The group's stretch of shows opening for Foo Fighters in stadiums across Australia took it about as far as physically and metaphorically possible from its roots in Toronto's hardcore scene, something Abraham's bellicose bellow references on opening cut, "Echo Boomer": "I'm the reflection of a dream," he shouts, "I had when I was 15."

"Fifteen-year-old Mike, I think, would be stoked but skeptical," guitarist Mike Haliechuk says. "It's a weird thing to encounter a dream from the past and try to digest it in the present. When you get something you never had the courage to want, it puts you in a weird and unsettled place."

Haliechuk wrote "Echo Boomer." He and Abraham evenly split writing credits on "Glass Boys"; each wrote half of the record's 10 songs. They wrote separately — the band members write and record most everything separately — but found they wrote about complementary themes — growing older in a punk rock band, the strange intersection of commerce and art, and the admittedly weird reality of living your rock 'n' roll dreams.

"I was super surprised at how close the lyric themes were … because it wasn't really talked about," Abraham says. "I learned more about Mike from these lyrics than I had in the past 10 years of touring with him."

Where "David Came to Life," a 78-minute rock opera in four acts, focused on fictional characters, "Glass Boys" finds Fucked Up with the narrative lens on itself with a collection about the perils of getting older and burdens of unexpected recognition. It's also markedly and mercifully shorter at 10 tracks and 43 minutes.

"I wanted to make sure it was an honest, first-person account, lyrically, as opposed to hiding behind characters or grand concepts of religion and nature — though I guess that stuff is still in there — that we've used before," Abraham says. "And the lyrics just started to come after that."

On the galloping "Touch Stone," Abraham gives voice to Haliechuk's rumination on recognizing himself ("You are who I remember / Me when I was just an ember") in young faces in the crowd. Abraham's midalbum songs "Paper the House" and "Det" hammer home common sentiments among punks approaching their mid-30s: "Endless potential / Bottomless regret," he growls over the thudding churn of the latter; over the feral sprint of the former, he bemoans, "The way I make living has driven me insane." At the end of the album-ending title track, Abraham acquiesces to — welcomes, even — the young Turks who'll prove his replacement: "I'm so scared, boy / But I'm ready / So replace me / Just erase me."

"I love punk," Abraham says. "It is still 70 percent of what I listen to but I would be lying if I pretended that role it plays in my life is that same. It is weird to find myself not needing it to be my everything anymore. There are new people embodying that spirit and driving it now. That's not to say that I'm not still a hardcore kid or Fucked Up isn't still a punk band in some form but there needs to those successive waves, or else stagnation sets in." S

Fucked Up plays with Weed, Dry Spell, and Slugz at Strange Matter on July Fourth with doors opening at 6 p.m. The all-ages show costs $12.