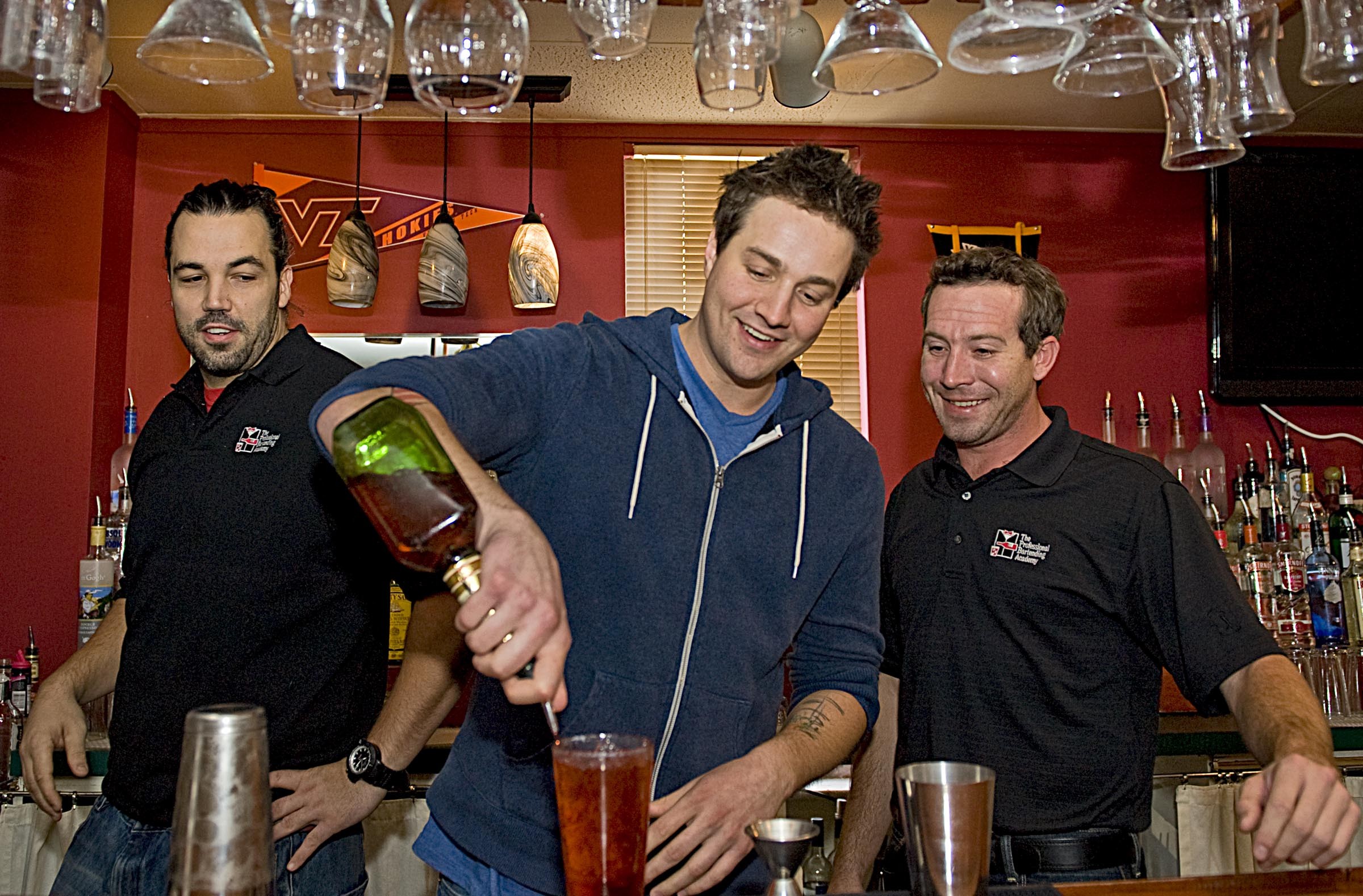 Becoming a bartender isn't supposed to take 40 hours of instruction spread over two and a half weeks. That's just too easy. It's supposed to be a labor-intensive ladder course that can't be paid for with a check. You're supposed to eat shit and hump cases of beer and wash dishes, all the while getting berated by older, more experienced barmen.

There's no time for niceties during a dinner rush, rookie. Now get the hell out of my way.

You're supposed to toil through eight-hour brunch shifts in some desolate outpost for a year before you even get to sniff a fart at a high-volume bar. The only way you ever really "earn" a big-ticket Friday or Saturday night shift is when the guy ahead of you dies. Through trial and error, embarrassing mistakes and repetition, repetition, repetition, you become serviceable (not necessarily good) at the craft. Getting hired by dropping off a résumé? Never. You must win the job through time, persistence and most important — relationships. (If you're a hot girl with big boobs, stop reading. Bar owners are sheep.)

I'll be damned if I'm going to hire some schmuck because he can make every rotten drink in the "Mr. Boston Official Bartender's Guide." Take your Singapore sling and shove it.

At least that's my impression of the bar industry after six years of making drinks (and eating shit). It also seems to be the accepted old-school way of thinking when it comes to the hierarchy of the bartender caste system.

And that's why I've always mocked the concept of a "bartending school."

Yet here I am at Richmond's Professional Bartending Academy on a recent morning with its director, Mike Love, and head trainer, Bradley Gallier.

I earned Love's ire through my dismissive comments in print regarding bartending schools. And so he repeatedly invited me to come get a better understanding of what really goes on there. I usually declined, a smirk on my face. Besides, according to this publication's reader poll and others, I was Richmond's best bartender!

(I'm not even in the top 100, but I don't mind people having the perception that I'm good.)

Gallier, on the other hand, is a longtime bartender who served me numerous drinks at Stool Pigeons through the years. He's one of the better bartenders Richmond has seen. I figured if he bought into bartending school, then I should probably at least take up Love on his offer.

I expect a few folding tables, a few bottles, maybe a chalkboard. But you don't feel like you're entering a classroom when you arrive. It's set up exactly like a bar: TVs, music, stools — the works. Because it isn't an ABC-licensed bar, the bottles don't contain alcohol. Classes are small, usually five to 10 students, and they aren't just sitting around taking notes. It seems to be a very hands-on experience.

But isn't bartending school just a crash memorization course on a bunch of obscure drinks that no one likes anyway? The last time someone actually ordered a Singapore sling was probably in a Southeast Asian brothel shortly after the Great War.

"The first thing I tell my students is that knowing the drinks is really only a third of the job," Gallier says. "Here we create a real bar atmosphere. We teach interaction, how to introduce yourself, how to upsell, how to deal with intoxicated customers. The real things you need to know. We show you how to control your bar."

But isn't learning on the job, from mistakes, the way most people become bartenders?

"Jack, trust me, I came in with skepticism also," Gallier says. "But I've seen it work. You can go get a bar job and you will be two and a half years ahead of someone who had not taken the class."

"An education always develops a foundation that produces success," says Love, who clearly gets asked these questions a lot. "If you get a job bartending without any prior knowledge, you're gonna be lost."

It's difficult to argue with guys who have more than 20 years of combined bartending experience.

It's also difficult to argue results. Love and his team have placed graduates at high-volume bars across the city, including a few where I've worked — spots where a newbie with zero knowledge would get crushed. I've seen it happen too many times.

At that moment Gallier receives a text message from a former student — now a working bartender — who asks if she can come in for a refresher course on a certain group of cocktails. Another benefit you receive with the school is lifetime assistance, whether with finding a gig or honing your skills. While any bartender who'd willingly come behind a bar for practice (and no money) is clearly new, I can't fault her enthusiasm.

There was a time when I wasn't bitter and really enjoyed the work. Sometimes — after an especially good night — I still feel that way.

I suppose this is where I must apologize to Mike Love. I'll admit, bartending school may not be the waste of time and money I thought it was. I still feel like you should get repeatedly stepped on over a period of years — not weeks — to earn a gig, but I can understand how schooling and a solid grounding in the basics can make the process less painful.

Knowledge only makes you stronger.

Meanwhile, I still have no fucking idea what a Singapore sling is.

Nor do I care.