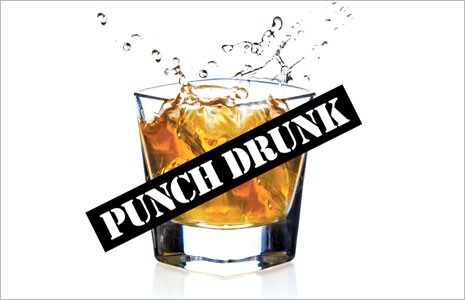 Knowing the bartender is a double-edged sword. Yeah, you get a few free drinks, but you end up spending more money than you would have otherwise because you tip them so much extra, or at least you should've tipped them so much extra. You did tip extra, right? If you didn't, then stop reading. You're done. Bye.

Gratuities aside, being "boys" with a bartender will bite you in the ass because these slick operators inevitably will pour you heavier in an effort to "hook you up." This — though completely insane and contradicting everything I stand for — isn't a good thing.

If you imbibe regularly — and if you read Style Weekly there's a good chance that you do — you understand the importance of pace.

If I wanted a triple-shot of Rumple Minze, then I'd ask for it. But I don't want that. No mentally sound person ever wants that. So I figured we needed a code word, a secret language that lets the barkeep know that we'd prefer to drink like normal human beings this evening, or I should say, as normal as people who get blindly drunk on a Tuesday night can be.

Enter the half shot, otherwise known as (and here's the secret phrase) "The Careless Whisper." Shhh. Say it softly.

You will still take many, and I mean many, of these half-shots, or "whispers." Hell, you'll probably drink more with this new system. But it will facilitate your effort to maintain that all-important pace and remain standing upright come 2 a.m.

Getting hammercanned, if you're traveling that route, should be a marathon — not a sprint — and this is what a few of my bartender brethren (Dane Acton, George Amundsen and Dustin Askew, to name a few) have decided is our new M.O. Think of yourself as a drunk turtle — a fun, charming, well-dressed, drunk turtle.

Forget that it sounds stupid. It works. And don't let the fact that we named our revolutionary new drinking style after a George Michael song fool you — we're still as rugged and manly as Elton John.

There's no shame in tying one on, but there's a finite limit to what you can drink in one sitting. The shame sets in once you surpass that limit and wake up next to your gimpy 200-pound stepsister.

Fifty Shades of … Mother, No!

Call me an "aficionado of the bawdy arts." Much classier.

Meanwhile I'm struggling to reconcile that my mother has almost finished the entire trilogy, and that at one point or another she actually had to engage in physical intercourse for me to be here on this Earth. It better have been her first and last time doing that.

Have a question for Richmond bartender Jack Lauterback? Email bartender@styleweekly.com. Lauterback also serves as co-host of 103.7-FM's "River Mornings with Melissa and Jack," weekdays from 6-9 a.m. On Twitter @Jackgoesforth.