A Regular Romance With Buddy's. 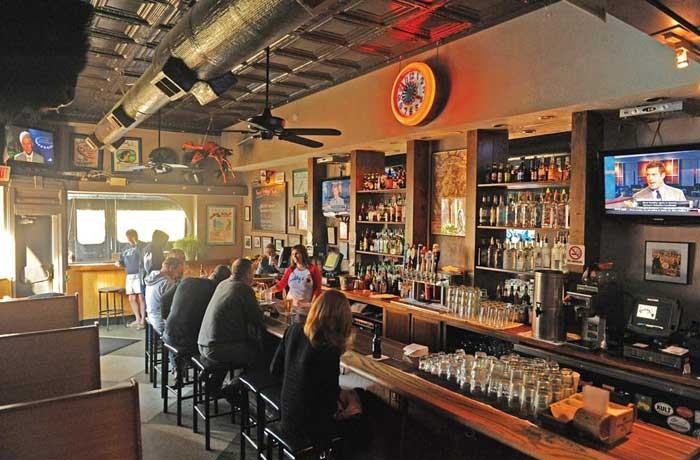 "History is the narrative of people searching for a place to go."
— J.R. Moehringer, "The Tender Bar"

How does a bar that can barely hold 60 patrons earn the outpouring of support and love from thousands of people? Buddy's is, after all, just a bar, just a place to grab a beer — right?

It's a matter of history, longtime regular Mark "Hawk" Harper says: "It's generational. I started coming here over 30 years ago and now my son comes here. My friends the same. Their sons and daughters come here just like we did when we were their age."

By now you probably know about Buddy's recent rollercoaster ride. The news broke to great buzz Jan. 14 that Charlie Diradour — who owns the building that houses Buddy's on the corner of Robinson Street and Stuart Avenue, wasn't going to renew the lease with the bar owners come December. Four days later, after a flurry of media reports and an outpouring of support on a "Save Buddy's" Facebook page that drew some 3,000 people, the venerable drinking institution announced last week that lease negotiations had resulted in a three-year stay.

As life very often comes down to business, I'm not here to question Diradour's decision to let Buddy's lease lapse or to ultimately renew it. Money is money, and perhaps there's more to be had with a new venture on that corner, or as Diradour put it, "the time for a fresh face to create a fresh place."

There's one thing a fresh place doesn't have: regulars. Regulars who will come to the defense of their lil' watering hole at a moment's notice. Regulars who have a vested interest in seeing that their corner bar stays just that.

"The years mean something," Buddy's bartender John-Michael Madison says of the nostalgia. "There are people who still come here who were here in the '80s."

Two years of my early 20s were spent at an address on the same block of Stuart, and now in my later 20s a Fan dweller, of course I've frequented Buddy's. Few people haven't. We've all seen those familiar faces sitting at the bar come 4 p.m., that group of night owls pressing in at 1 a.m. and all the characters in-between. Not unlike every bar where I've worked or drank, Buddy's has hardcore regulars — fiercer in their loyalty and higher in number because of the bar's longevity.

These people could just as easily be the ones sitting at some neighborhood bar in the West End or a sports bar out on South Side. The location matters not. This is their bar — the quintessential pub, the unspoken finality when it comes to "grabbing a drink."

The bartender — through the long chats, endless beers, the night he had to toss them out the door — is their bartender. Drunk Dave down there on the corner of the bar — he's their bar drunk, dammit!

It's about belonging. People who have never been regulars couldn't possibly understand this phenomenon. People who "only drink on the weekends" probably couldn't either. Familial bonds are built over time, over the clink of two glasses, over a bar tab paid for by a friend, over an argument settled with a free shot from a stranger.

I've heard some say that life is nothing but a series of romances, and if one is foolish enough to be so sentimental, then Buddy's could've fallen by the wayside like an ex-lover, never wholly forgotten, but its place in our lives fuzzier as the waves of time slowly eroded her memory. The regulars, the moments, the nights that defined life at that bar could've passed, a new set of people taking over the corner, commanding the space — the barroom that you once called home — rebuilding their own moments and creating their own nights until they moved on, and so on, and so on, until one day it would've been like Buddy's, that corner bar — any bar anywhere in America — that you once called "my bar," never existed.

Thankfully — at least for another three years — Richmond has decided that its love affair with Buddy's still has legs.

"People my age," Harper says, "people in their early 20s — it doesn't matter. It just melds here. It just works."

Call it drunk mob mentality. Never underestimate the power of a group of people who like to drink together.

Richmond bartender Jack Lauterback contributes to Mixology magazine in Germany and co-hosts with Melissa Chase weekdays from 6-9 on 103.7 The River's "River Mornings with Melissa and Jack." On Twitter @Jackgoesforth and by email at bartender@styleweekly.com.

Correction: In the print version of this story, and in the column "Short Order," we incorrectly reported that Baja Bean Co. was closing. It is the space above the restaurant that is for lease. Baja remains open and will host a VCU basketball Internet night on Wednesday. Style regrets the error.