Jack's Night Out With Kim Jong-un.

If anyone saw me out this past weekend with a chubby Asian man who I probably introduced as John Kim III — or if it was later in the evening, Kimmy Kegstands — then you, oh lucky subject, have just seen the mover of earth and heavens, the great radiator of a thousand points of sunbeam and the presumptive next head of the Democratic People's Republic of Korea — also my old classmate from boarding school days — the Great Successor, Kim Jong-un.

Kim was in town tying up some loose ends, grabbing some so-called construction materials he needed and meeting with Congressman Eric Cantor to, in his own words — "wheel and deal" — before heading back to Asia for the grand unleashing of his reign of bizarre terror upon the very suspecting masses of North Korea. A reign that he assured me will make his grandfather, the Eternal President Kim Il-sung, "blush with pride and joy in the great hibiscus-laden gardens of Elysium."

Hearing that his old drinking buddy from boarding school — Kim-Jack-the-Illest — lives in Richmond, he shows up at my door to ask if I will show him the city on New Year's Eve. I, fearing reprisal for the wrong answer or for even meeting the steely yet ethereally perfect glare of the 20-something North Korean man of iron and beautiful flower, humbly bow.

What follows is the entirely truthful, unembellished, eternal account of the evening, as objectively reported by the North Korean State News Service, which has never reported an untruth and has absolutely no bias:

8 p.m. — Kim Jong-un, 20 large men in black suits who all are dead ringers for Chong Li from the seminal classic "Bloodsport" and I arrive at Bandito's Burrito Lounge. The Great Successor eats nothing as his discipline is like that of the great owl. He does, however, enjoy 39 margaritas in rapid succession. His consumption is unequaled on this Earth and the next.

9 p.m. — We are told by the Delicate Little Flower, Bandito's bartender Otto Bartsch, of something called the Silo Effect at the Camel. Kim's interest seems noticeably piqued. "We have many silos in North Korea," he remarks. Then, snickering while nudging me in the ribs, he adds, "Seldom do they contain grain!"
This is followed by an explosion of boisterous laughter and applause from Kim's 20 henchmen, I mean, umm, 20 friends.

10 p.m. — Kim is disappointed to find that the Silo Effect is nothing but some Virginia Commonwealth University students with laser pointers and guitars. He hastily gives them all death touches. The strenuous though ridiculously easy task — "because a lack of compulsory military service has made America weak like chipmunk," Kim says — makes him thirsty. Forty shots of Johnnie Walker Black Label are downed immediately.

Midnight — Arrive at Off the Hookah. Kim Jong-un refuses to dance. Instead he pulls up his pants and does a graceful rock away. He then leans back against the bar and I watch in amazement while beautiful women engulf him like flocks of rainbow-flecked hummingbirds mixed with falling pristine yellow blossom petals. Kim uses his many muscular arms like that of Shiva and his golden, unblemished missile of titanium to pleasure every single one.

3 a.m. — We meet Virginia Gov. Bob McDonnell at the Paper Moon. One of Kim's friends happens to mention that "the strip clubs in Pyongyang are one million moons better than this hell hole."

I nod in agreement.

Kim and Bobby McD proceed to make their way to the lap dance room with 15 women, as it is fact that no one woman can please the two transcendent heads of state (or commonwealth).

4 a.m. — A stripper named Curly Sue emerges, telling me that she's overheard bits of their conversation. Something about "allowing nuclear proliferation when I finally get elected president" and "our great partnership" and something else about "uniting to wipe Japan and South Korea off the map."

For America's sake I pray that Curly Sue is coked out of her mind or is the most inordinately educated and imaginative stripper that I've ever met.

Upon the two great leaders' return I hear Bobby McD saying something about "throwing a sick music festival right in the DMZ."

"Like, right in the middle bro!" he shouts while he snorts directly from a large cakelike hunk of pure yellow uranium.

It is a New Year's that I won't soon forget. Although that probably has more to do with the brainwashing than anything else. 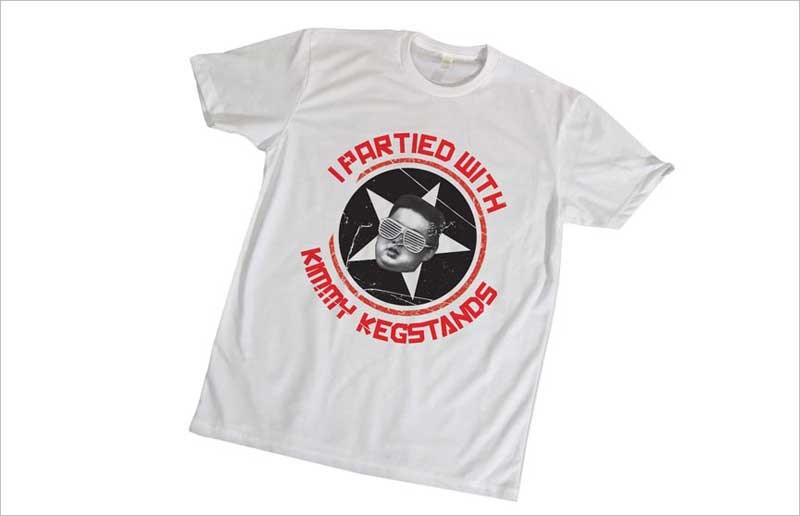 Richmond bartender Jack Lauterback can be heard on "River Mornings with Melissa and Jack" weekdays from 6-9 on 103.7 The River. On Twitter @Jackgoesforth and by email at bartender@styleweekly.com.