The man, the verb. 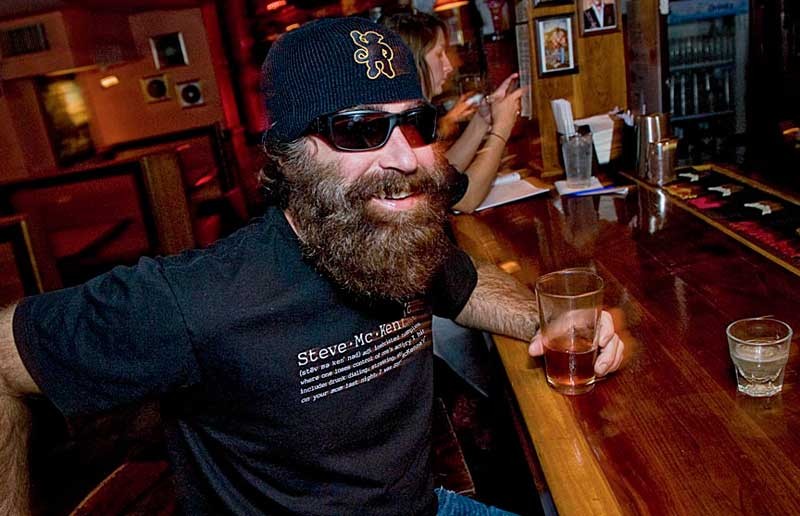 Steve Mc-Ken-na’d: To be inebriated to the point where one loses control of actions. Examples may include drunk dialing, no restraint over bodily functions, streaking, etc. “Sorry I hit on your mom last night, I was Steve McKenna’d.” — Urban Dictionary

For Richmond native McKenna, of Spike TV’s “Three Sheets” and “Drinking Made Easy” on HDnet, drinking hard and often is all in a day’s work. He’s the co-host and stunt drinker on the latter show alongside Zane Lamprey, a friend from college. Their jobs are to travel and imbibe — all the while exploring the local drinking culture. The job doesn’t suck.

Originally not appearing on “Three Sheets” — he was known to fans through Lamprey’s endless drinking stories about “his buddy Steve” — McKenna eventually was invited by Lamprey to a filming in Kentucky. There, he lived up to his rep by getting hilariously drunk, showing off a massive hangover to the world — along with his bare ass during an impromptu streaking session — and proving to be a perfect foil to Lamprey. He’s been drinking and growing his trademark Poseidon-like beard for TV audiences ever since (one that might be seen in Spielberg’s Richmond-filmed “Lincoln,” where he recently wrapped a stint as an extra).

In-between projects and in Richmond with family, the international man of consumption meets up with me on a Tuesday night. I interview him at one of the places where I bartend, Lady N’awlins Cajun Café, before we set out for the Blue Goat, where McKenna’s brother Ben works and where the television episodes are the focus of weekly viewing parties.

What first strikes you about McKenna is that he isn’t a total lunatic — which easily could be inferred from the televised lunacy. Aside from being ridiculously hirsute, he’s actually quite normal. I wonder aloud if being a family man while living a double life as a paid travel drinker puts a strain on his marriage, not to mention the tissue that makes up his liver.

“Our last comedy tour [and filming for “Drinking Made Easy”] lasted 105 days without a break, so it can be difficult,” he says. “I have to give a shout out to my beautiful wife, Joana. The bottom line is, she puts up with my crap. I’m very lucky.”

“It can be a grind,” McKenna says. “Some mornings we roll into a city and are on the radio at 6 a.m., drinking whiskey by 6 p.m., doing eating challenges and drinking challenges constantly. You have to regulate yourself. Gotta leave something in the tank.”

Sometimes that’s not so successful. The last time they filmed in the Hampton Roads region for “Drinking Made Easy” involved way too many of Waterman’s Surfside Grille’s famous orange crushes, and culminated with McKenna falling backward off of a stage in Norfolk later that night.

Stories like these tend to be commonplace when you hang out with McKenna.

Beginning as a busboy at a precocious 10 years old, McKenna has never strayed far from the barstool. He was a theater major at the state University of New York in Cortland, where he met his drinking buddy, Lamprey. Today he’s a silent partner in an upstate New York restaurant, in addition to being a co-partner in a production company. He seems tailor-made for a career in front of the camera.

While I continue to ply McKenna with shots and drinks, which clearly is nothing new for him, I ask if it becomes difficult to enter a bar and not be forced to take shots and overdrink with fans. Wouldn’t that get old?

“No,” he says. “It’s the best feeling in the world. People coming up and telling you that they love the show and want to buy you a shot? That I’m the reason they watch? That never gets old.”

But there’s no sense of going Hollywood here. It’s almost as if I’m drinking with an old high-school friend, which is part of his appeal as the everyman drinker you see onscreen.

After a number of beers — I introduce him to the Abita line of beer at Lady N’awlins — and what I recall being my seventh or so shot of the evening, I start to feel slightly unsteady on my barstool. Next to me the professional is in a groove and presumably unaffected by the alcohol. Not wanting a night of streaking down Grove Avenue, I take my exit.

The next morning I get a text from McKenna: “I have a decent hangover.”

I take solace in the fact that Steve McKenna is human.

Turn the tables and let the bar-stool bard pour you the drinks. Catch Steve McKenna behind the bar for the next few weeks on Wednesdays at the Blue Goat for his weekly “Drinking Made Easy” viewing party starting at 8 p.m. More on McKenna at stevemckennad.com.

Richmond bartender Jack Lauterback tweets @Jackgoesforth and can be heard on “River Mornings with Melissa and Jack” weekdays from 6-9 on 103.7 The River. Email: bartender@styleweekly.com.