“It smells of dead ol’ lady fahhts in heh,” she says, surveying the illustrious Jefferson Hotel on a Saturday night. “My sensah-billi-tays have been offended!”

Such good-natured teasing is just the kind of unabashed observation you come to expect from Richmond’s homegrown, Southern fried, finger-lickin’ tasty Magnolia Jackson Pickett Burnside — my friend, the drag queen.

“The term drag queen can curry a ne-guh-tive connotation,” she says. “I preffuh to be called a lady.”

“Well technically, for the sake of this column, you’re a drag queen,” I reply.

And then with a wave of her velvet gloved hand, an upturned nose and a Southern twang that’s one part Scarlett O’Hara and one part Foghorn Leghorn: “Daaaahhhhlin’, I’m ahh Suuuhhhthern belle! Now fetch me another double bourbon.”

And off I go to the hotel’s bar at Lemaire. At 6-foot-6 in heels and with the build of a feminine middle linebacker, Miss Magnolia tends to get her way.

It was at Nations on a night two years ago when the larger than life Jackson Pickett Burnside character was born. I was there. Since that time Magnolia has been crowned the Queen of Drag Burlesque in Richmond, named Best Drag Performer in this magazine and has been called one of Richmond Magazine’s Top 5 People We Can’t Live Without. In addition to playing host to every burlesque show known to man, or she-men in this case, she’ll also be featured in the “Revealed: Fabergé Burlesque” show at the Virginia Museum of Fine Arts — a crown jewel, or egg, if you will, of the young performer’s career — and really, a giant leap forward for Richmond burlesque in general. The old bags at the museum aren’t as old and baggy as I initially believed.

So, like much of our fine Southern capital, I am fascinated with Miss Jackson Pickett Burnside.

Having ignored her request for a “hurse and chariot,” the night begins in my Altima. We go forth and do what we Southerners do best: get drunk on bourbon and trade witty barbs.

Lemaire seems like the logical place to begin. The Jefferson Hotel gets its share of classy cross-dressing socialites. No?

There are some glances, some muffled whispers from tourists and the like. This is still Richmond, Va. Clearly there are people out there who simply have never encountered a lady of such refinement, of such noble pedigree. 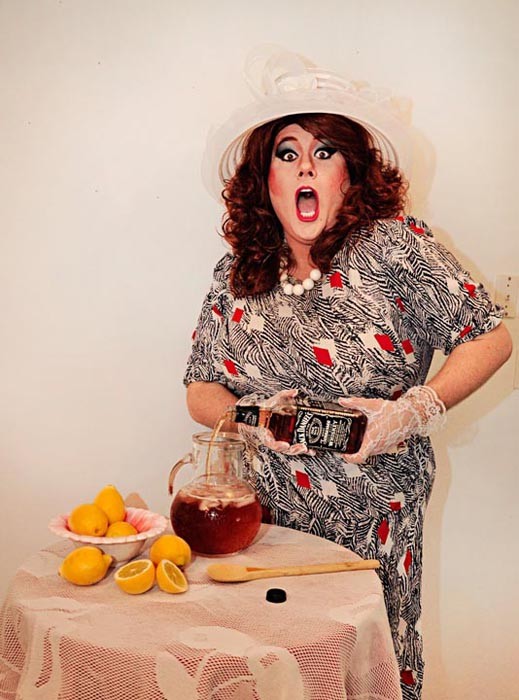 To Miss Jackson Pickett Burnside’s credit, she literally gives no fucks whatsoever about what anyone thinks or says about her lifestyle choices. She takes the term flamboyant to new levels. Whole weeks are devoted to outlandish, intricate and ultimately stylish outfits that usually will get only one wear. Tonight she embraces the magenta-feathered-pillbox-hat, church-lady-on-steroids look.

Our mutual friend Amanda Pierce comes along for the ride, and sums it up best: “It’s the weirder the better when it comes to Magnolia. It’s impossible to make her uncomfortable.”

We order the cheese plate. We order bourbon. Then we order some more “buh-bin.”

I soon find that Miss Magnolia, the bastion of affability and citadel of Southern gentility that she is, isn’t one to get uppity with.

Sharp, foul and incredibly smart insults tumble out of her mouth. Always in a proper Southern manner. Always in a manner that suggests that she is above the pettiness, above the fray of this uneducated buffoonery. It’s an insult to her very being to associate with such coarse and unpolished scofflaws!

Every other comment has the table rolling, laughing over the polite and low-key din at Lemaire. What, did someone vandalize the Robert E. Lee statue?

Did I mention that we’re drinking Jack Daniels and Jim Beam like we all took a musket ball to the leg and are about to endure a battlefield amputation with a bloody hacksaw?

“May we toast?!” Magnolia raises her drink and gesticulates to the room. “To the Capital of the Confeduraasah! May those sad and brave Confeduhrates stay in theyah graaavves!”

Profound if not completely bewildering. We all solemnly take our shots of Jim Beam.

The night slowly dissolves into the kinds of events and words — and a return visit to Nations — that there’s no way in hell Style Weekly will allow me to print.

Catch one of mine and Richmond’s faves, a truly beautiful person, on Friday, Sept 23, at the Virginia Museum of Fine Arts for a burlesque show inspired by the “Fabergé Revealed” exhibit. It starts at 7 p.m. after a beer and wine social hour.

I can’t even imagine what Magnolia has in store for that poor egg.