This Week: An Irishman Walks Into a Bar 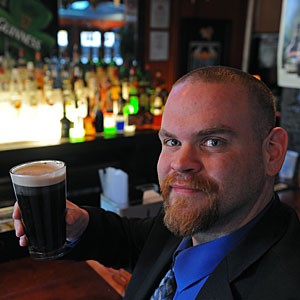 In honor of St. Patrick's Day, the crown jewel of all the repugnant drinking holidays, I sit down with the extremely Irish Sean McIntosh, a close friend and the general manager of Bow Tie Cinemas' Movieland at Boulevard Square, to get his take on the day and what it means to be an Irish-American.

McIntosh moved here from Connecticut two years ago to open and run Movieland, which has quickly become the place to catch movies in Richmond. I met McIntosh at my bar the week he arrived in town, so it only seems fitting that we meet in a bar or three for this interview, conducted amidst Guinness and Car Bombs. What follows is an edited version of our conversation:

Q: Red hair, alcohol “advocate,” prone to bouts of incoherent rage. … What's it like being a walking Irish stereotype?

A: I can already tell that agreeing to this interview was a mistake [laughs]. It's not that bad. My size helps with the alcohol tolerance.

Q: As a quarter-Irish man myself, do you ever just wish that your ancestors were from like, Denmark or something?

A: No I love being Irish. A little too much at times. My liver probably wishes my ancestry was from Denmark, though.

Q: Finish this sentence: An Irishman walks into a bar …

A: That means that he actually left the bar in the first place.

Q: Why is it that St. Pat's brings out such a diverse crowd of hard-drinking assholes? Is that offensive to you as a hard-drinking (Irish) asshole?

A: You're one to talk. No, the only offensive part is the fact that it's amateur hour. If not for the embracing of my heritage I probably wouldn't go out at all on that day. The worst drunks are usually not the Irish on St. Patrick's Day.

Q: Judging by everything I've witnessed on his anointed day, this St. Pat guy must've been a real douche bag. Would you agree?

A: Well you gotta love him. He drove the snakes out of Ireland man! And honestly what would happen to bartenders' average annual incomes if not for ol' St. Pat?

Q: If you can even remotely piece it together, what's the best time you've ever had on St. Pat's Day?

A: Manhattan. Hit the big parade with a big group of friends. Afterwards we found a nice lil' Cuban bar and were the only people there. Got sloshed without the crowds. Got great service. It's not about Irish pubs. It's about drinking and enjoyment. Waiting in lines is not conducive to my thirst.

Q: Where are you going to be on St. Patrick's Day this year?

A: Besides drunk town? I don't really have one bar in this town. I'll probably just be hopping around. Whichever place has the shortest line. Again, it's about drinking and enjoying, not fighting crowds.

A: “State Of Grace” — About the Irish mob in Hell's Kitchen.

Q: Fellow Irishman Oscar Wilde was bisexual. Is there a correlation between your love of his poetry and you constantly trying to kiss me when you're drunk?

A: No, the bigger issue is your latent homosexuality and the fact that all of this is in your mind. I have to beat you back with a stick sometimes.

A: Potato was and is a staple. Over one million died during the famine. Touchy topic. Pop quiz for you: Why does Style still let you waste a page in their paper?

On the air: Look for me Thursday (St. Patrick's Day) on “Virginia This Morning,” which airs 9-10 a.m. on CBS-6. I'll be showing the viewing audience — yes, 16 people is considered an “audience” — how to make some St. Pat's-themed drinks for the big day. And if he'll accommodate me, I'll be slamming an Irish Car Bomb with anchor Greg McQuade on air, which I'm sure is illegal or something. Starting the next day, for a few Fridays, I'll be joining Style Editor Jason Roop on the radio to chat things up with Mason on the X 102.1-FM. Tune in around 4:30 p.m.