This Week: For the love of the planks.

“Why would I stop doing this? I have the best bartending job in Richmond,” says Sean Telliard, head bartender at Morton's the Steakhouse in Shockoe Slip.

It's no stretch to agree with Telliard's employment assessment. A plum gig at a big-ticket, happy-hour-heavy eatery such as Morton's is something every full-time bartender dreams of. 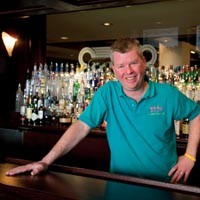 The thirsty patrons at Morton's the Steakhouse are in good hands with bartender Sean Telliard. Photo by Scott Elmquist

Telliard is one of Richmond's most popular and longest-running barmen. He tended the planks at Southern Culture and Havana '59 before helping open Morton's seven years ago. His boundless energy and vivacity behind the bar belies his age, a number that is generally long past the expiration date for most bartenders.

Mr. Telliard is 41, and he's unequivocally one of the best bartenders I've seen. I say this with a sigh, but the guy could easily run circles around this 26-year-old.

Skills learned from many years of slinging are one thing, but a great bartender should be judged on how he handles his customers. Telliard's deft touch with regulars and new patrons alike, such as recalling complicated drink orders or a customer's child's name, separate him from others who tend. Attention to detail is seemingly the reason why he has the best bartending job in Richmond, both monetarily and quality-of-life-wise. Simply put, customers love the guy.

“I have many non-Richmond regulars who frequent the city on business,” Telliard says of his customers. “Some have been coming by weekly since we've opened.”

As any restaurateur can tell you, once a bartender has a following, he's set. I'm sure it also doesn't hurt when some of those regulars pack corporate credit cards.

When asked if he'd ever trade in the shaker tin for a suit, Telliard smiles and lets loose an easy cackle: “I tried accounting, very briefly, and the lifestyle just doesn't compare.”

Shortly after writing most of this column I spy Telliard at a stoplight on Broad Street around 2 p.m. on a Tuesday, the top down on his old-school Benz, wearing sunglasses and smiling. He laughs and yells out, “Hey slacker, get a real job!”

Scenes like that convince me that it's possible to never grow old.

Do yourself a favor and visit Telliard on a weeknight. There's no excuse to balk at the prices, because Morton's has started offering competitive food and drink specials for bar customers during happy hour — though even without that, it's worth the price of admission to see one of our city's best barkeeps in action.

Move Over Jameson
During a recent visit to Morton's, Mr. Telliard, knowing my penchant for Irish whiskey, introduces me to Red Breast 12 Year Pure Pot Still Whiskey. While it's not new to the market I've somehow never been made aware of its existence. It's hands-down the best whiskey I've had the pleasure of tasting. Last month it received a coveted Double Gold Medal at the San Francisco World Spirits Competition. This whiskey is big and bold with hints of nuts, honey and fruit, yet retains an incredible smoothness. I have henceforth ended my tumultuous relationships with Mr. John Jameson and Sir. Thomas Phillips, the founder of Bushmills.

Richmond bartender Jack Lauterback consumes and slings drinks at a number of local establishments. He also writes a surly blog at www.jackgoesforth.blogspot.com. Find him on Twitter @jackgoesforth. Have a question or comment for the bartender? E-mail: bartender@styleweekly.com.