The lights go up, revealing a room awash in people still reveling, still grasping for the prime of the night, perhaps longing for just one more mindless Journey song. Beer bottles and cocktail glasses line every conceivable surface in the bar. The floor is covered in sweat, grime and beverage napkins.

Massive bouncers immediately begin to herd the mass of drunken humanity toward the door — many of them clamoring for us to close their tabs, many more whining and cajoling for “just one more drink.” A few of the rabble mill around like sheep with no real intention of going anywhere, somehow hoping they'll slip through the cracks and get to hang out late night. At least one or two girls are seen blubbering about some perceived slight. Someone has lost their cell phone, their purse, their boyfriend, a hundred-dollar bill that they're certain has fallen out of their pocket.

If we're lucky there will be no fisticuffs or vomit this evening. We hope no girls will be passed out sans pants on the toilet either, although a cheaper laugh at someone else's expense you will not find.

The night's folly is (mostly) over, but the work is far from done.

I can breathe free for a few seconds now. Light a smoke before the rubber gloves go on and the nightly rubbish gets assaulted.

You will go home, or to McDonald's, or to one of Richmond's dubious late-night clubs. I will stay at the bar for two more hours, cleaning up your shit and laughing at all of the half-witted things that you do.

It's no office job, but there are certain pleasures that come with bartending.

I'm Bringing Pickle Back: The pickleback, or what some savvy wordsmiths have dubbed the “pisky whickle,” has been trending heavily with the barstool bards lately. The pickleback consists of a shot of whiskey chased by a shot of dill-pickle brine. Go ahead and grimace -- I did -- but there's something so simple and complementary about the combination. A blend of smoke, salt and sweet that somehow just works. It's sort of the antithesis of the whole complex mixology, egg-yolk infused who-wee that's so celebrated these days. 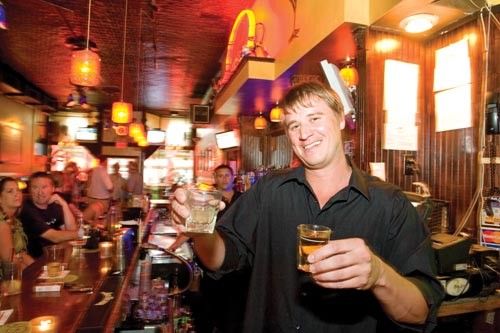 At 3 Monkeys, bartender Brandon Jackson shows off the bar's version of a pickleback: a shot of Jameson with a floater of St. Germain liqueur, right, chased by a shot of pickle brine. Photo by Scott Elmquist

The origin of the pickle chaser is up for dispute, but most give credit to the so-hipster-it's-anti-hipster Bushwick Country Club in Williamsburg, Brooklyn, in 2008 or 2009. Others point out that Texas long-haul truck drivers long have drunk pickle juice for its anti-diuretic effect and that may have something to do with the whiskey-pickle combo.

The folks at Jameson Irish whiskey recently made the claim that they originated the pickleback, and in fact, it was with Jameson that I first tried it. In lieu of Jameson though, I recommend something cheaper and of the American variety. Something with more heat on the palate. Any rail bourbon will suffice quite nicely. I mean c'mon, the bartender is holding the pickles in the jar with his filthy hands as he pours you a shot of brine, so there's no need to be embarrassed about ordering a shot of the cheap stuff.

Locally Brandon Jackson and Jonathan “J.D.” Denning at 3 Monkeys have been slinging quite a few “St. Jameson Picklebacks” (a shot of Jameson with a floater of St. Germain liqueur, followed by the pickle juice). And by the time this column is published, I'll have introduced it to my regular whiskey drinkers also.

Drop the convoluted crap and grab the pickle.