Some cities engage residents when searching for, say, a new police chief or a school superintendent. Richmond isn't one of them. 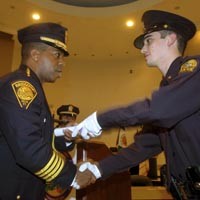 It is May and empty folding chairs outnumber people gathered in the Linwood Holton Elementary School auditorium. About 40 residents are here for the last of three public forums held to kick off the Richmond School Board's search to replace outgoing Superintendent Deborah Jewell-Sherman.

One of the few speakers, former School Board chairman David Ballard, advocates keeping news media at arm's length and the public equally remote while the selection committee does its work and the board makes its final choice.

Even with only 40 people, that May meeting boasts more members of the public than participated in selecting a new police chief. The four-month process that led Mayor L. Douglas Wilder to select Bryan T. Norwood, who was introduced Oct. 8, was held entirely behind closed doors.

City Councilman Chris Hilbert walked in minutes before the end of the conference. He was the only member of council present.
“I don't know that the administration owes me a heads up on that,” Hilbert says afterward. But if that heads up wasn't owed him, Hilbert says he wonders whether such courtesy might have been due the people at large. A more open process, he says, “and you're more apt to get community buy-in.”

Forgive Richmond if its reception of Norwood has been chilly. Community buy-in is something Richmond's leaders have long assumed came free of charge. But that was supposed to change under Wilder's self-proclaimed “A-A-A mandate” of access, action and accountability.
Even the Police Department had little notification. It was informed of Norwood's hire by the same release sent to news media.

The department's union — about one of every eight officers walking a beat is a member — has been vocal in expressing its disappointment that acting chief David McCoy was passed over. The union has also questioned Norwood's baggage. He has had significant dust-ups with the police union representing members of his former department in Bridgeport, Conn. A month ago, that union gave him a no-confidence vote in leadership.

“To me what is regrettable is that we've not heard what kind of reformer he was and that this is a reaction from old-timers,” University of Richmond professor John Moeser says. The troubles largely hinge on the beleaguered chief's attempt to staff new programs with sworn officers based on skill and qualifications, rather than seniority.

Wilder's surprise announcement “has hurt Norwood,” Moeser says. “It also, I think, has raised unnecessarily questions about the whole search process itself. If there had been a wider vetting … certainly [the union controversy] would have come to the surface, but people would have been more aware of what the issue really was.”

“What we lack is context,” Moeser says.

The very real possibility that the Norwood selection could become a debacle stands in sharp contrast to the selection processes undertaken by two communities that, ironically, were considering former Richmond officials. Charlotte, N.C., recently chose Richmond's former police chief, Rodney Monroe, to take over its police department after an open and public process that included a candidate forum and a meet-and-greet event.

Memphis, Tenn., recently considered acting-Richmond Superintendent of Schools Yvonne Brandon for its superintendent post. She didn't get the job. But during Memphis' open search process one of the other five finalists withdrew himself from consideration after residents searched the Internet and revealed he came with heavy political baggage, which was discovered after the official selection committee had vetted the finalist.

“He had issues in Buffalo, and he would have been questioned about his Buffalo superintendency when he came down here,” says John Branston, a local newspaper columnist and editor. The open search, Branston says, is a traditional process for the city.

Secrecy, proponents of closed-door searches say, is critical to protect the privacy of the applicants. Commonwealth's Attorney Mike Herring, a member of the new chief's selection committee, declined to comment on other finalists at the Norwood announcement. Similarly, Dominion Resources Chief Executive Tom Farrell, chair of the superintendent search committee, barred the public from an August meeting.

“There has to be some confidentiality — the people you might want to be interested might not want to be involved in a beauty contest,” says Bill Bosher, a former state superintendent of education and Wilder adviser who's involved in selecting a new Henrico County school superintendent. He points to concerns that qualified candidates may have about damaging relations back home if their job search becomes public.

Other cities don't seem to have such qualms. In places such as Memphis, Charlotte and Buffalo, there's even a sense that the public has the right to be involved.

The majority of candidates running for Richmond mayor say they would advocate a more public process, where the final candidates are introduced to the public before a final selection is made by city leaders. One, Paul Goldman, says the closed Norwood search precludes him from serving in a Goldman administration.

Either way, the public should be part of the conversation, all of them say.

“It's an interesting idea and it is one I have also seen work in other searches that I've been a part of,” Robert Grey says. “In particular university searches where they're trying to find a president or a dean. You usually have a committee that does the narrowing down and then you get down to a handful and they are then presented to the community they are going to serve and allowed to engage the community. It's a further vetting of the candidate and it has worked.”

Moeser agrees, acknowledging that if a lesson can be learned from the Norwood experience, it's that a secretive search and hires often backfire. It's a lesson that might be applied to the School Board's search for a superintendent.

“It suggests to me that the way Charlotte did it would be a darn good way for our superintendent search committee to do it,” Moeser says, calling it of mutual benefit to the community, elected officials and the new superintendent, “so there doesn't have to be an after-the-fact explanation of why this person was selected.” S