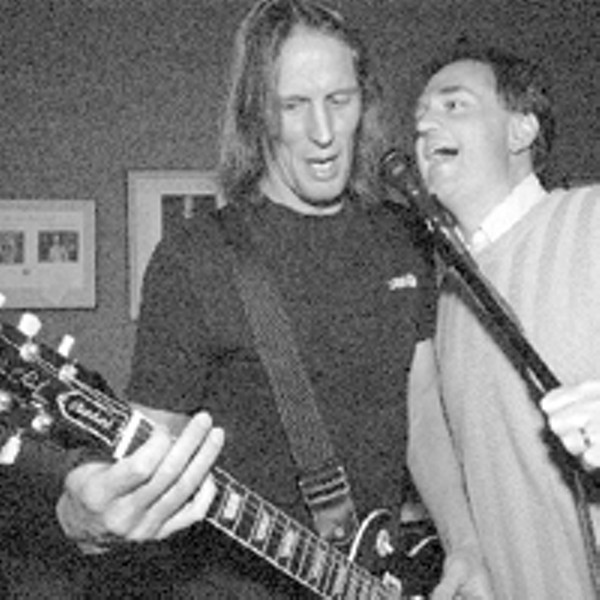 The Ham-a-Ganza, a wacky holiday benefit for the Central Virginia Food Bank featuring Donny Corcoran, a.k.a. Dirtwoman, takes place Dec. 19 at Poe’s Pub. The event begins at 9, and to get in, you must bring a cured or canned ham.

This year’s theme is a play on “celebrity” hams, says Holmberg, who has helped coordinate the event for his friend, the benefit’s originator, Peter Headley.

Juggler/illusionist Jonathan Austin will warm up the crowd and perform three songs by the Ramones, Holmberg says. Former City Councilman Chuck Richardson is slated to “sing some blues” and give a poetry reading, although he isn’t present for tonight’s practice. (By phone he tells Style he’s happy to take part in the benefit, though he offers the caveat: “Michael Graham is doing some wild things; I hope it doesn’t preclude me from carrying on because of my political perspective.”)

WRVA’s Graham, who has lambasted Richardson on-air, says he never thought he’d share a stage with Richardson. He confesses he has a few surprises up his sleeve. His songs are parodies, for instance. Graham performs his rendition of “That’s What I Like About You,” followed by George Thorogood’s “Bad to the Bone.” He jumps up and down to the music, in white sneakers and jeans, signaling the thumbs up to his backup chorus and crew.

Next, Diana Diehl, a copy editor for the Times-Dispatch, sings an L-7 song that Holmberg has embellished with lyrics about Richmond’s notorious and beloved Dirtwoman. Like Richardson, Dirtwoman isn’t present. “Donny’s practice will be his performance,” Holmberg says. Dirtwoman will play Mrs. Claus at the event, and she and the others are prepared to ham it up for the cause.

“A lot of people are willing to make asses of themselves,” Holmberg says. The band has just played “These Boots Are Made for Walkin’.” There is cacophony on the floor. “We need to quiet down and let the vocals carry,” he directs the group. “Let’s try it again.” He shakes his head and smiles, tearing a riff on his red Fender. “This is going to be a train wreck,” he says. — Brandon Walters