The Reel Pride Film Festival is a provocative first. 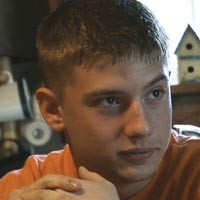 John Dougherty says he hopes the Reel Pride Richmond Film Festival, scheduled for this weekend at the Firehouse Theatre, is “the beginning of a tradition that celebrates our community in film for years to come.”

Dougherty is executive director of the Richmond Organization for Sexual Minority Youth, known by the acronym ROSMY, which is sponsoring the city's first film festival focusing on gay, lesbian, bisexual and transgender themes.

The organization was founded in 1991 to give young gay people in Virginia equal opportunities through support, education and advocacy. The festival will feature a series of provocative films that speak to its mission. The lineup bridges the generation gap between the earliest ROSMY members, now adults, and today's young people.

Four of the five pictures, “Patrik 1.5,” “Out in the Silence,” “Baby Formula” and “Breakfast with Scot,” grapple with the differences between child and guardian that threaten to be irreconcilable. The fifth film provides a positive glimmer of hope: “Edie and Thea, A Very Long Engagement,” tells the story of an instant attraction that flourished for more than 40 years.

The free Saturday 11 a.m. screening of the award-winning documentary, “Out in the Silence” —  a “stunning” achievement, according to the Philadelphia Inquirer — will be followed by a Q&A with the filmmaker Joe Wilson. Dougherty says that the film “is driven to demonstrate how youth's energy and enthusiasm and commitment to their school and community can lead to change.  [It] will give younger viewers and ROSMY members the chance to meet adults who've faced similar problems, people who can offer guidance.” S

The Reel Pride Richmond Film Festival opens Feb. 5 at the Firehouse Theatre at 1609 W. Broad St., with a reception and screening of “Patrik 1.5” at 7 p.m. The festival continues all day on Feb. 6. Tickets are $7 per film. For schedule, information and to purchase tickets, go to reelpriderichmond.org.