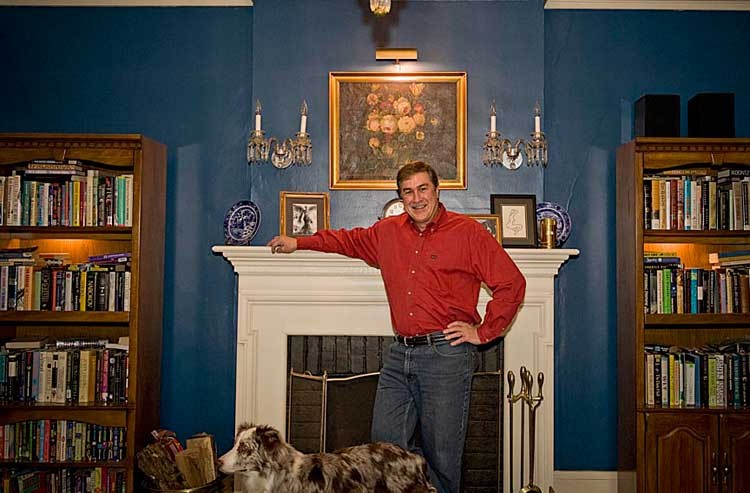 While I was reading "2012 Montezuma's Revenge," its author, Mark Covington, let me know that his newest novel, "Homemade Sin," had just been released Christmas Eve. In addition, his play "Shakespeare in the Trailer Park" receives a staged reading by Richmond Shakespeare in April.

Yes, two novels and a play in one year. But that's not all. Before the piece I'm writing makes its way to print, Covington informs me that "a theater company based out of Alberta wants to produce my play there and in Johannesburg, and I am about halfway through the third draft of my next novel, 'Khamel Towing.'"

Awkward title, I think, but then Covington's characters seem always to poke fun at our rigid beliefs. But instead of pigeonholing him over genre specifics and merchandising plans, there's something even more important that you should know.

Mark Covington is a writer. You can see it in the way he fidgets with thoughts and the way, settling on one, he goes quickly down the rabbit hole of an idea. He does this in conversation and he does this with novels. He's published four, and not in the order that he wrote them. The first was published on his own, and three others through small presses. He's grateful to the publishers who have given him quality editors, cover designs, royalties, and brought his work to market, he says, but he's also waiting for "the big guys" to take notice. And when that happens, he has a plan.

Most novelists are just like Covington, to some degree. They work for years. They slowly improve. They find a way to balance regular lives, earning livings doing things that have nothing to do with writing, spending significant portions of free time away from family and friends, holed up in isolation, tacking down sentences and scenes before they fly out the high windows of the mind.

But Covington has a big-picture perspective that fuels him. He relies on his expertise in project management to bring an idea into the stadium effect of a finished work, with all attendant bells and whistles.

"Before I began writing novels," Covington mentions in one of his blogs, "I was an IT Project Manager. So when I started writing novels, it was only logical to apply some of the techniques I had used in project management to ensure I was using my writing time most effectively."

Covington's productivity thrives within this model, and he credits the left and right hemispheres of his brain working in harmony, simultaneously addressing a multiplicity of creative and rational tasks. "The only way to eat the elephant," he says, "is one bite at a time."

Still, it's one thing to deal with the "then what?" of a plot, but it's quite another to be confronted with this question at the end of a novel, and another still after it's been published and nothing, for the most part, has changed.

If I asked a thousand writers if their work were any good, I'd probably only read the ones who would answer no. It indicates a kind of humility and contradiction that I admire, because isn't this the situation of writing itself: the inability to ever render the idea well enough? It's an undertaking that's literally always in revision mode and never satisfied. One piece builds on another to attain some vague idea of failure or success.

I'm glad that writers such as Covington are out there, after work, typing away most every night, from 8 till midnight, even on weekends and vacations. I think about his tortured keyboard, the letters all worn away, begging for respite while he makes his way through a discovery draft, eyes closed, the smoke of his imagination pouring from his ears.

It's a difficult and delicate trade. You might be able to write, but can you finish? That's the big question. "Sometimes I step in and direct," Covington says, "but other times I just let my characters have the reins. And sometimes they just take the reins from me and I write down what happens." S

Find out about Mark Covington at vmarkcovington.com.