The opening shows of CenterStage pull together more than 225 cast members, 40 production staffers and one very tight turnaround. 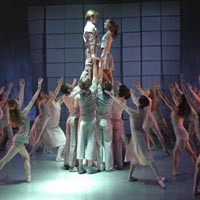 The countdown clock to CenterStage's grand opening could drive a mortal mad, especially if you were in charge of the inaugural show featuring 225-plus cast members — with only 10 days to prepare in your performance space.

“Eighteen days, 12 hours, 52 minutes and 4 seconds,” Keith Martin says matter-of-factly in an interview this week. The managing director of the Richmond Ballet ticks off the time as though the madness is under control.

The show he's overseeing with his ballet's production director, Michael Stewart, brings together CenterStage's nine producing resident companies — the first time the groups have shared a stage. Planning for the show, “Opening the Doors to Serious Fun,” kicked off December 2007.

While the opening and finale features the entire cast, the show consists of companies performing individually and juxtaposed in varying combinations. Martin calls it a sampler that will allow each group to showcase its strengths.

The School of the Performing Arts in the Richmond Community, or SPARC, will be backed by the Richmond Symphony to excerpts from “Les MisAcrables.” The symphony joins with Richmond Shakespeare to intersperse music and theater featuring songs and sonnets by the Bard.

The Latin Ballet of Virginia dances into a medley by Theatre IV/Barksdale featuring excerpts from “High School Musical,” “Boleros for the Disenchanted,” “Thoroughly Modern Millie” and “The Sound of Music.”

The African American Repertory Theatre performs poetry and readings by Langston Hughes with dancers from City Dance in the Richmond's Department of Parks, Recreation and Community Facilities.

Performances by the Richmond Jazz Society, the Elegba Folklore Society, the Richmond Ballet and the Virginia Opera also fill the playbill, as well as a Richmond Symphony that will see three different conductors — Erin Freeman, the symphony's associate conductor, Peter Mark of the opera and Ron Matson for the ballet.

“D-Day took less planning,” Martin says. Forty crew members and others will help direct backstage traffic, wrangle performers, keep track of dozens of wireless microphones and juggle different dance floors. “Every nook and cranny” of the new building will be used, he says.

Each group has worked in its own rehearsal space so far. Martin gets to move the production into the building Sept. 1. That's 10 days before an invitational dress rehearsal for construction workers, contractors, volunteers and their families Sept. 10. There's a sneak preview for donors and VIPs Sept. 11. The two-and-a-half hour show (including a 20-minute intermission) opens to the public Sept. 12-13.

Until Sept. 1, however, performers are scattered. As for lighting designers and other production efforts, Martin says, there's as much preparation as you can do outside the theater. “They design it all on paper,” he says, “and then you make it happen.” S

Ribbon-Cutting/Tours
When: Saturday, Sept. 12, 4 p.m.
What: A ribbon-cutting ceremony with Gov. Tim Kaine. Tours of CenterStage follow from 5-6:30 p.m.
Where: In front of CenterStage, on Grace Street between Sixth and Seventh streets.
To Go: Free