Primed for a Premiere 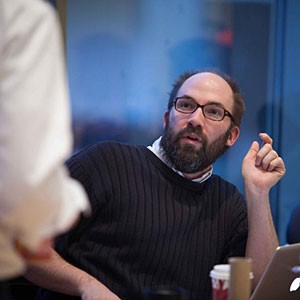 On the phone, Clay McLeod Chapman sounds as giddy as a kid at Christmas. The Richmond native is calling from Norfolk, where he's working with a large creative team that includes celebrated musician Bruce Hornsby and Tony Award-winning director John Rando on the world premiere production of “SCKBSTD” (pronounced “sick bastard”), opening at Virginia Stage in Norfolk this weekend. “I'm in a room with all of these Grammy winners and Tony winners,” Chapman says. “I want to turn to the person next to me and say, ‘Can you believe this?'”

When still a teenager in the 1990s, Chapman electrified the Richmond theater scene with his “Pumpkin Pie Show,” a rollicking and ever-changing performance piece built around his decidedly dark short stories. He's since toured the world with the show, collected some of his stories in “Rest Area” (published in 2002), and written a novel (2003's “Miss Corpus”). It was this novel that brought him to the attention of Hornsby and the producers of the play.

As Chapman tells the story, producer Michael Rafael had long considered Hornsby's character-based songs ripe for development into a musical. But when the Williamsburg-based pianist began writing songs inspired by a creepy stranger who'd been cruising the streets of his hometown, the producer felt stuck on who would write the libretto. Then he ran into someone in an elevator who'd just read Chapman's novel, also about “a crazy guy in a car.” Rafael gave Chapman a call and, with the Virginia connection in his favor, the author soon found himself in meetings with Hornsby.

Chapman has a growing list of playwriting credits — his “Lee's Miserables” and “Volume of Smoke” have been produced locally — but he's never worked on this kind of collaboration. “It started out with Bruce saying, ‘Here's a boatload of songs,'” Chapman recalls. “He'd been tinkering with ideas for a while. It was like having a map where all of the highways have been erased. I had the destinations but I had to get the story from one place to the next.”

And a challenging story it is. According to the official synopsis, “SCKBSTD tells the story of close-knit small town rocked with rumor and fear when a stranger moves in and cruises the streets in his Dodge.” Chapman elaborates, “It's it's a show that explores the kind of pre-conceived notions people have, particularly in this post 9/11 climate. Is this guy a pedophile, a terrorist? What is going on behind the surface?”

Chapman credits the producers for giving him relative carte blanche and Hornsby for not hampering his darker tendencies. “In a strange way, the darkness has been more of an issue for me,” Chapman says. “Bruce is a provocateur. He likes to find the edge and keep on going. There have been times I've found myself thinking, ‘Maybe we should not go there.'” S