Preview: Zoso at the National 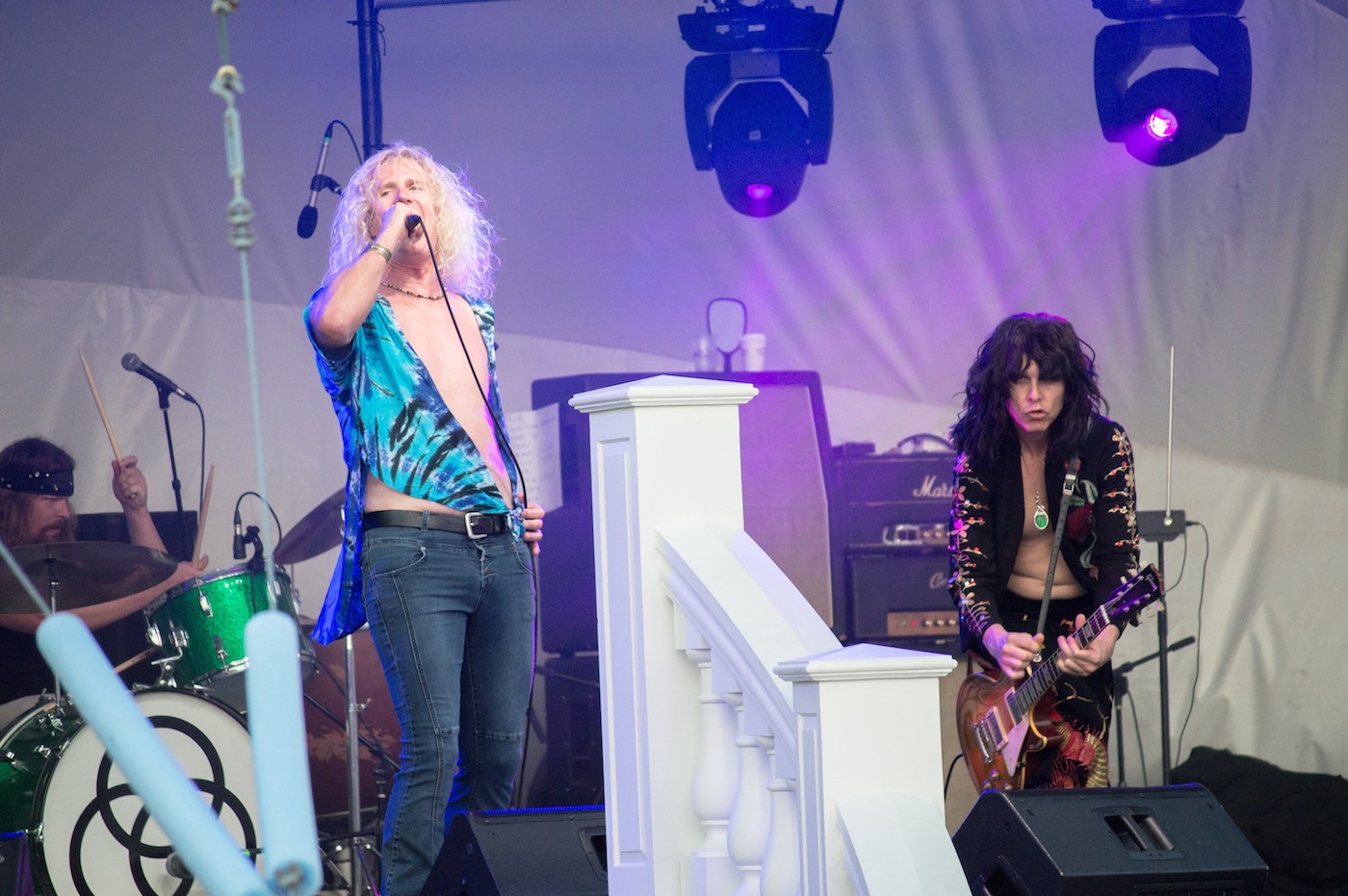 There is always a moment in a Zoso show when the lights dim, the smoke wafts through the haze of lights, and the 1970s figure of Robert Plant gyrates across the stage to the slick guitar riffs of a younger Jimmy Page adorned in wide-leg black velvet embroidered pants and jacket. Both are shirtless, their wild hair shaking—a hedonistic nod to an age that is long gone but still revered.

Led Zeppelin may be gone, but the tribute band Zoso recreates the mythic figures 140-150 times a year, night after night, for a crowd thirsty for the legends of rock.

The band Zoso is celebrating its 20th anniversary this year, comprised of Matt Jernigan as Robert Plant, John McDaniel as Jimmy Page, Adam Sandling as John Paul Jones, and Bevan Davies as John Bonham. Bevan Davies is new to the band, having joined in September, and brings a new energy with past experience with the rock bands Danzig and Comes with the Fall.

Zoso started in 1995 originally with Jernigan and Sandling, later picking up John McDaniel. Jernigan and Sandling were seeking a recording contract in LA when an agent noticed a rendition that Matt and Adam did of “Whole Lotta Love” and “Kashmir.” They were good. Real good. Blues-based rock was not selling, but tribute bands were just starting.

“You know we realized we really had it, when people started paying attention,” singer Jernigan explains. “It probably took two to three years to get developed. And even 20 years later, we’re still learning the music. People don’t realize how complex, what master composers they were. I’m still hearing things that my subconscious picked up but I didn’t and suddenly it comes back to me and I go, ‘I’m doing that wrong.’”

It’s hard to imagine that Zoso is not the younger Led Zeppelin, they are so convincing. But they didn’t have much material to work with in creating these figures. Other than sparse video, they had still photos of the individuals, some band shots. “The guys are doing their thing,” Jernigan says, “so you just have to imagine what they would do in their natural flow and performance.”

It was not until "How the West Was Won," released in 2003, that Zoso had more footage to work with. “We were just doing ‘Ten Years Gone’ on the bass at first, then we found out that [John Paul] Jones would be on the acoustic 12 string and the bass with the bass pedals. Adam said ‘We can do it this way because they did it this way.’”

Each member “Zeppelinizes” their style and equipment to recreate each song with exactness. Sandling moves easily between three instruments—the mandolin, the bass guitar, and the keyboard to replicate the versatile John Paul Jones. McDaniel uses a bow on his guitar for the song “Dazed and Confused” and switches easily from a double neck Gibson SG to an acoustic guitar. Off stage, Jernigan speaks with a thick Southern accent, but on-stage takes on Plant’s persona from his British lilt to subtle hand movements and a hip shaking jauntiness as he struts about.

The Richmond audience will see Davies as Bonham for the first time and it is obvious that the dynamic between Davies and the other members is refreshing, with Davies bringing his own high energy to Bonham’s solo “Moby Dick.” The costumes are all replicas of former concert footage from Page’s famous Black Dragon suit with astrology symbols embroidered to Plant’s open shirt with bell bottomed jeans. The guys from Zoso are a bit older than the Led Zeppelin characters that they mimic on stage, but they still look the part. When asked if they work out, Jernigan smiles and says, ‘No.” But then adds, “Every night on stage. It’s all in the genes—jeans,” he laughs, tugging at his pants.

Zoso’s yearly schedule is grueling—the demand for their shows high. So how do they do it? They took a page out of Pink Floyd’s handbook. They leapfrog across the country. While one show is setting up, another truck with another full set of equipment is hauling their gear to another site on the other side of the US . “We have to play with our own gear—we play on our backline because it’s our own sound. We know what we’ve got, what it’ll take. It’s our thing,” Jernigan explains.

So it’s more than just fancy costumes and smoke. All the members go to great lengths to create Zeppelin’s exact sound. And the fans—especially the fans of Led Zeppelin—can see and hear the effort.