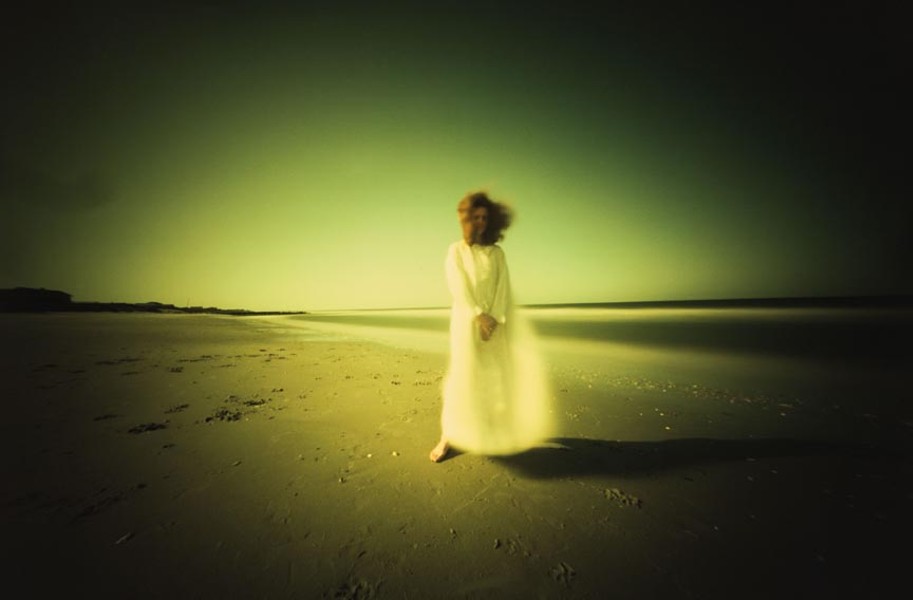 Photographer Willie Anne Wright’s “Pawley’s Island, South Carolina: Nancy by the Ocean,” a cibachrome pinhole photograph. Candela Books and Gallery will be releasing 42 of her images in its sixth book release.

Any reproduction of Willie Anne Wright’s cibachrome pinhole photographs pales in comparison to the original. With vignetted borders that occlude visual information, Wright’s images glow in an ethereal way, as seen in “Still Life with Richard’s Road #2” (1981). They have an unearthly presence — a power that lies somewhere within the pinhole photography process.

It’s clear that Wright, who still processes prints in her studio basement, is infatuated with the hands-on process of developing. Cibachrome is a positive-to-positive color printing process. Though pinhole photography is notoriously known for its distortion, poor exposure, incorrect color balance and exaggerated features made possible through the infinite depth of field, Wright uses these so-called flaws to her advantage to make unique individual works.

In “Direct Positive,” which opens Nov. 6, Candela’s Books and Gallery features 32 images selected from a much larger collection of several hundred prints that Wright made from around 1978 to 1989. Alongside these, the exhibition will display the handmade pinhole cameras that Wright built to take the photographs. Corresponding with the exhibition, founder and director Gordon Stettinius has selected 42 works for an exhibition catalogue of the same name — Candela’s sixth book release.

“Wright’s use of materials is very innovative,” Stettinius says. “She’s probably one of the most earnest and diligent photographers — she committed to a very labor-intensive process. Likewise, her work isn’t just technical. It has a connection to the past, it shows everyday life, and although there is color distortion from the pinhole process each photograph is still beautifully printed.”

First introduced to Wright in the 1990s, Stettinius approached the accomplished photographer about a year ago, following her exhibition at Page Bond Gallery last summer. “I had seen bits and pieces of Willie Anne’s work at different places and private collections,” Stettinius says. “I wanted to do a book for her but I wasn’t aware of what she had. Fortunately, there was lots of material. This collection of work is built around her process.”

Although she received a degree in psychology from the College of William and Mary, Wright says she “didn’t get around to art until [she] had three kids.” After completing her master’s degree in painting in 1964 at Richmond Polytechnic Institute (now Virginia Commonwealth University), she took a photography class during the summer of 1972 because she wanted to document her paintings.

“Our first project was to make our own pinhole cameras,” she recalls. “The minute I saw the first pinhole photograph come up in the developer, I was hooked.” By 1978, she had moved to cibachrome prints. “I still painted for a few years during that time, but gradually my darkroom because my focus.”

She turned her camera to the people and things around her: the backyard pool, sunbathers, pregnant women and still lifes. “For my subject matter, there wasn’t much thinking about it,” Wright says. “It was what was practical. Exposure times during the midsummer, bright sunlight had to be long. I needed something to be still. I was lucky to have friends who were also photographers and they would pose.”

Perhaps another part of the allure of Wright’s photographs resides in the tightly composed scenes. A doubling takes place in many works that reinforce their symmetry: two women, a pair of parrots or mirrored pears. A pregnant woman’s exposed, ample belly in “Before Kate” (1987) is underscored by the corresponding watermelon that sits underneath her chair. A swimmer on a raft is squeezed in by a severe V-shaped corner of the swimming pool in “Richmond Virginia: Sarah at Casa’s Pool” (1985). Reoccurring themes of time, repetition and life cycle appear in the overripe fruit, the sun passing over the beach goers, or the luscious, bucolic floral garden. Yet there’s also something ominous lurking beneath the surface of these pictures.

“The work is romantic, nostalgic, and her haunting imagery speaks of death and mysticism,” Candela’s associate director, Ashby Nickerson, says. “It has a magical quality.”

Wright says she enjoys other people making stories about her photographs. “I’m a narrative person,” she says. “I like the works to be a springboard into their own feelings.”

The selection for Candela’s exhibition and catalogue will tell one story: These are just a small number from a much larger body of work.

As Stettinius says, “We were looking for timelessness.” S

“Willie Anne Wright: Direct Positive” at Candela Books and Gallery runs from Nov. 6 through Dec. 23. A preview and artist talk is Thursday, Nov. 5, from 5-8 p.m. The opening reception and book release will be held Nov. 6 from 5-9 p.m.