Three artists with Richmond connections emphasize the process of making.

Tara Donovan’s “Untitled” (2015) is a relief print from a Slinky matrix.

And it’s only pronounced after the passing of time. Social media platforms, which allow individuals to curate their lives for onlookers, underscore the notion of life as a game we glide through from one accomplishment to the next, racing to keep up or outpace our peers.

Like a moment of double vision, or the perception of two images at once, good art acts as a vehicle of interlude to reorient the psyche and hesitate for a split second longer. We need it to reassess the present before we have only the past to look back on. 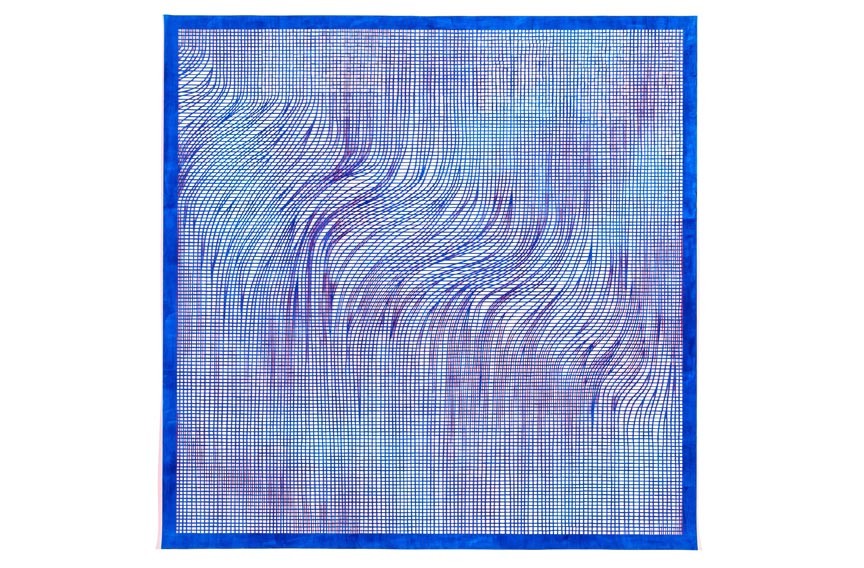 In many ways, Donovan, Roth and Suggs are connected by their analog sensibility, as each emphasizes the handmade, repetitive processes, standardized forms, history and traditional studio practice. The process of making is essential. Perhaps this sensibility begins to get at the appeal behind the art. In a fast-paced world where the only guarantee is instability, market volatility and constant change, alluringly subtle works such as these stop the passerby — not just for a pause, but to hold the viewer’s attention for a moment or two before plunging people back into their frenetic realities of busyness.

I’d seen Donovan’s “Slinkys” relief prints before. Last summer they were cramped in a windowless upstairs room at Pace Gallery in New York, hung almost as a conceptual aside to her “Drawing (Pins)” that lined the main floor and sparkled in the summer sun. The striking contrast seemed to relegate the prints, made by pressing a Slinky matrix into a hydraulic press, to production work while elevating the “Drawing (Pins)” to serious art.

In Richmond, the prints have been given space to breathe. Likewise, they gain new meaning as supplemental investigations for a larger body of work, including Donovan’s three-dimensional installation “Untitled” (2015), which hangs alongside the prints. The installation, which stretches across a 22-foot wall, of deconstructed and reconstructed metal Slinky rings seems to float in midair as a long tubular shape that twists and turns back onto itself. It’s classic Donovan: an exponentially large volume of mundane objects arranged in an organic, aesthetic shape.

In the adjoining two rooms on the ground floor, Roth’s “Speed Bump” features 10 new box paintings alongside two thinly elongated paintings that he calls blades. Visual references from 20th-century art abound: Piet Mondrian in “No Fear,” Ellsworth Kelly in “White Lightning,” Bridget Riley in “For You, My Love,” and Stuart Davis in “Champion,” all from 2015, with a heavy dose of Donald Judd’s “Specific Objects” undergirding Roth’s entire project, which blurs the boundary between painting and sculpture. The clean lines, standardized form and opaque paint allow Roth room for experimentation, especially as indicated by the selection of titles.

The most impressive work, however, resides on the second floor. Suggs’ “Double Vision” steals the show with her works on paper, abaca, made from banana-leaf fibers, or Yupo, a tear-proof synthetic. Suggs most successfully investigates the nature of vision through works like “Drift” or “Converging the Target,” unframed single sheets of reverse-painted, hand-pierced, two-dimensional planes that cling ever so slightly to the wall. Each fragile sheet is enhanced by the ethereal shadows it casts along the wall, giving off a strange three-dimensionality to create her double visions. Other works by Suggs, including the accumulation of small circles of silver Mylar and hologram foil into double concentric forms, as seen in “Crossed” and “You See in When You Look Out,” vie for a close second. S