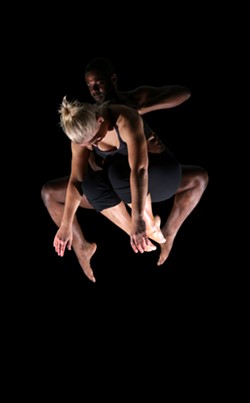 What do you want from art? I want it to rattle my heart in its cage, to shine light into the dark, to tackle the big questions. Starr Foster’s "Levitate" does this, weaving movement, sound, light, and space into a bewitching meditation on the afterlife and our journey from here to there.

The production stands as an object lesson on dance as a collaborative art that can both transform and be transformed by the space that contains it, the people who watch it, the music that envelopes it.

Starr Foster Dance Project will re-stage "Levitate," which premiered in 2014 as a site-specific performance in the old Sea Dream Leather building on Broad Street, this weekend in four intimate performances at the Basement. In this iteration, the work will be viewed by audiences on two sides. As in the 2014 premiere, it is lit only by lanterns the dancers wield themselves, and set to a pensive, haunting score by Richmond-based composer, Joey Luck.

Luck created an original score for the work in a collaborative process with Foster that resembled nothing so much as . . . a dance.

“There was some choreography that was written to the music, and some music that was written to the choreography,” he says. “I appreciate working both ways. I’d watch video [of rehearsal] and I could be inspired by the movement and feed off the dancers’ emotion. I’d accent different moments with different sounds and then bring the music into a rehearsal along with the video and show the dancers and Starr what I had in mind when I was writing to the movement.”

“For the sections where I was writing the music before the choreography, I was able to take what I had experienced in those other sections, with Starr’s input and notes, and feel where it would go. Then we would exchange drafts and make notes and fine tune. We had many meetings prior to beginning and throughout the process. It was a lot of fun.”

Foster enjoyed the collaboration as well, finding that she and Luck most often agreed on how to approach the work. When Foster received a second section of music from Luck, she says, “it was so staccato and so powerful, both of us ended up agreeing that it had to close the piece.”

"Levitate" is a 45-minute, five-section dance pondering the afterlife. You can imagine how pivotal the ending must be. And as it turns out, says Foster, “My favorite part of the dance is the ending. I mean, I love the beginning image, but the end is just kind of perfect. It’s like when you read a book, and it’s the perfect ending, and you close it and you’re perfectly satisfied. There’s no cliffhanger, it just kind of sums it all up.”

Starr Foster Dance Project presents "Levitate" on Saturday, Jan. 14 at 7 p.m. and 9 p.m. and Sunday, Jan. 15 at 3 p.m. and 5 p.m. at the Basement at TheatreLab, 300 East Broad St. Admission is $15 through advance purchase only at www.brownpapertickets.com.