A brand new Pride event celebrates, elevates, and hopes to prove that you don’t have to come out to show up. 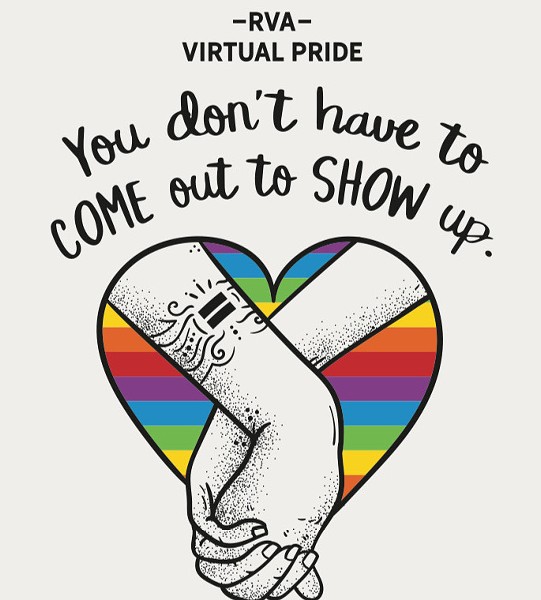 June is typically a month chock full of bedazzled parades and packed clubs blaring fresh summer beats to commemorate Pride. But let’s face it: we're all feeling a little less than joyful at the moment. A pandemic has had us cooped up in our homes for months, unemployment remains at a high level, systemic racism is very real and hate crimes are rampant.

Things are a little different, but some folx are taking the opportunity to advocate and celebrate with virtual events. One standout is the RVA Virtual Pride Market, a volunteer-run shopping and entertainment extravaganza that seeks to promote the visibility and awareness of LGBTQ+ artisans, groups and small businesses and raise funds for both Black Lives Matter and Nationz Foundation, a local organization that supports overall health and wellness, HIV-education and queer inclusivity in the community.

“We had been discussing the possibility of doing some sort of Pride market event over the past year but didn't have the bandwidth to do it, and the timing just wasn't right,” says co-founder Holly Foster. “It was Andy’s brain baby though.”

The other founder, Andy Waller, and Foster met back in 2012 doing nonprofit work and became fast friends when they each opened local, small businesses. Foster runs Pistil & Stamen, a floral design business, and Waller crafts small-batch jams, pickles and salsas under the name Dayum This is My Jam.

The Pride market idea gained momentum when Waller asked a handful of neighbors if they’d be interested in displaying a small pride flag in support of Pride 2020 during the pandemic. The response was incredibly supportive and an online event seemed like a no-brainer. Waller engaged Foster to kick off planning.

“This was before the killings of George Floyd and others, before the protests. Once that started happening, as Andy put it, a fire was lit under the nation and shifted our focus to advocate, and be as intersectional and truly as about the community as possible,” says Foster. “We also really aimed to align it with what's going on right now in terms of how Pride started, which was through protests and riots at Stonewall [late 1960s riots in New York]."

As the duo started to reach out to contacts in the queer community and other business owners, word spread. The response was overwhelming. They were approached by a slew of makers, performers, and major players like The Martin Agency and Virginia Pride who wanted to be a part of the one-of-a-kind celebration.

Things kick off early Saturday morning and won’t wind down until Sunday evening. The market opens at 8 a.m. with vendor features and includes entertainment ranging from children’s book readings and pet naming contests with Richmond Animal Care and Control to DJ sets, a queer history lesson with Magnolia Jackson Pickett Burnside and visual smorgasbord by beloved puppeteers All Saints Theatre Company, among many others.

Sunday will be all about shopping locally crafted wares -- but don’t think QVC.

“No QueerVC with us dressing up like Vanna White or anything,” says Foster, laughing. “It’s about sharing information available items and the chance to learn more about the business themselves and how they support the queer community, things of that nature,” she adds.

A portion of vendor sales and proceeds from the event’s official t-shirt will benefit Nationz Foundation. You can also purchase Black Lives Matter yard signs printed by local, Black-owned Faith Printing to help both organizations.

“We’re just really grateful. I can't think of a better word than grateful for like, just the amount of love that people want to put into this, it just means a lot,” says Foster.