Preview: Richmond Ballet Gets Dangerous With the Classic Tragedy of "Romeo and Juliet" 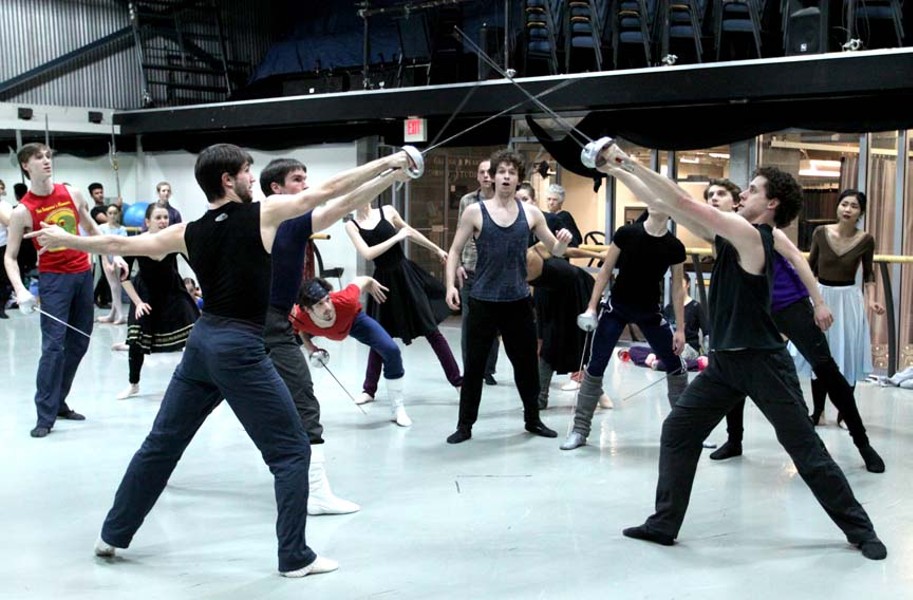 It’s no secret that “Romeo and Juliet” is both a love story and a blood bath.

Richmond Ballet presents Shakespeare’s tragic work over Valentine’s Day weekend, and it has all the essential components. One is a lot of sword fights, with real swords. Real fencing swords, anyway. Enough to put an eye out.

“It can be dangerous,” company dancer Thomas Ragland says. “We’re told: ‘Don’t do any tricks. Do nothing except what you are taught.’ We take this part really seriously.”

On a cold Wednesday afternoon two days before a snowstorm, ballet master Malcolm Burn leads a post-lunch rehearsal of one of the more casual sword fights in the production. When the cast erupts into a melee, each clash of the swords, and they do clash, is intricately choreographed, a combination of fencing moves and ballet steps.

“Anything could happen, honestly,” Ragland says. “That’s why when we first learned, it was just the guys in the room. No one else. We had to learn our positions so no one gets whacked.”

Burn stops the dancers frequently during the scene to give feedback.

“Did you have a martini with lunch?” he shouts. The offending party smiles. Burn’s comments add levity to a long afternoon. He starts the music again. This is his choreography and he knows every stroke of the sword. Part of the trick is for the dancers to keep the sword strikes low to the ground, with small motions on tempo with the music.

“When we start hitting high,” company dancer Marty Davis says, “we get too close to each other. We’ve been working hard to keep our distance.”

Another challenge in a ballet with a doomed romance and a high body count is transmitting Shakespeare’s genius without uttering a single syllable.

“You need to know who your character is,” Davis says. “We read about their background. We have to pull in and focus on who they are.” Davis plays Benvolio, Romeo’s minder. “I don’t do a very good job,” he says of his character’s attempts to keep Romeo out of trouble. “But I try.”

The score was composed by Sergei Prokofiev in Soviet Russia during the time of the Great Terror. From the mid- to late-1930s, two million people — some estimates put the toll much higher — were arrested, executed or sent to labor camps. All art was regulated by the Communist Party. Stalin himself regularly attended ballet performances and watched from a bulletproof enclave.

Initially Prokofiev deviated from Shakespeare’s play and wrote a happy ending. It’s unknown if this ending was an attempt to please Stalin, who preferred happy endings, or if composer Prokofiev’s Christian Science faith played a role in his decision. But authorities despised it and Prokofiev put the tragedy back where it belonged and revised the score.

“The music for this ballet is unbelievable,” notes Kate Crowder, communications director of Richmond Ballet. “At the end you feel gutted.”

With the original unhappy ending restored, the dancers must use their acting skills.

“It’s a little bit difficult,” Ragland says. “I’m trying to tell a story with my eyes and face. Everyone has to bring their full A-game in this production.” Ragland plays Paris, the unsuccessful suitor of Juliet and is an also understudy for Tybalt, Romeo’s rival.

“I know six years ago when we did this,” Ragland says, “Malcolm demanded silence during the balcony and death scenes with Romeo and Juliet. No joking around and talking on the sidelines. We don’t want to break the moment. We have to be in their world with them.”

And in this world, there’s enough pain to level each and every Capulet and Montague.

“For Malcolm,” Crowder says, “it’s not about the struggle between these great families or the rivalry. The heart of this is about those who suffer loss.” S